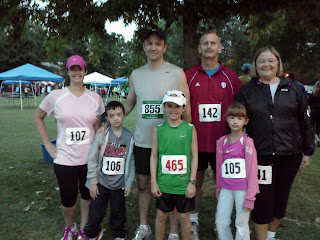 This was the race we planned months ago when we first challenged Grandma to run a 5k with us.  We've run lots of races in between then and now, but we all managed to set new PR's today.  50° and overcast made for perfect running weather. 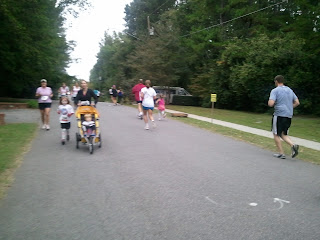 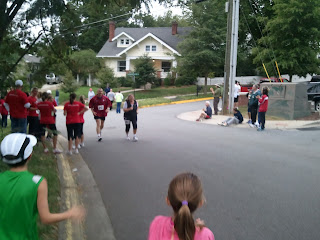 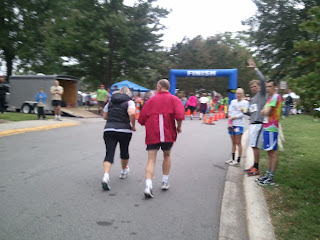 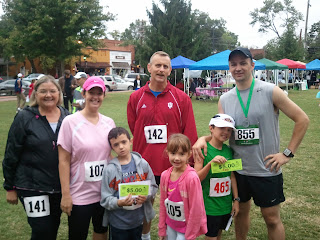 Posted by Lillywhite Family at 9:05 PM No comments:

Written by Malissa
After having a horrible long run last week I decided I needed to find a running partner to help me with my long runs.
The first person that came to my mind was my friend Joana. I texted her to see what her pace was, hoping it was faster but not too much faster than me. Come to find out she was a lot faster than me but wanted to run with me anyways.
The first two miles felt great, averaging 11:33 and 11:54. The third mile I got a massive cramp behind the right side of my rib cage. Joana knew right away that it was from me talking too much. Because I don't normally run with anyone, I'm not use to talking while I run. So she told me to take a break from talking and focus on my breathing. That mile I averaged 13:08. The fourth, fifth, and sixth mile we picked back up the pace and averaged 11:42, 11:57, 11:34.
I'm so thankful to Joana for running with me. It was such a selfless act on her part. We were running a lot slower than what she was use to but she didn't seem to mind.
It was my fastest long run ever and other than my cramp at the beginning, It felt great. Looks like I found my running partner!


Here's a look at last Saturday's run by myself and today's run with Joana.


Such a big difference! Thanks again Joana!
Posted by Lillywhite Family at 2:51 PM No comments:

Well, it didn't go as planned. No matter what I tried I couldn't get my legs to go faster than my usual fourteen minute pace but then on my last mile I pushed out a 12:04.

I think I know what my problem is. I can push myself on the short distances because I know it will only last a little while but struggle with the longer distances. I think I need to find a running partner for my long runs. Someone that will help push me through to the end.
Posted by Lillywhite Family at 8:25 AM No comments: 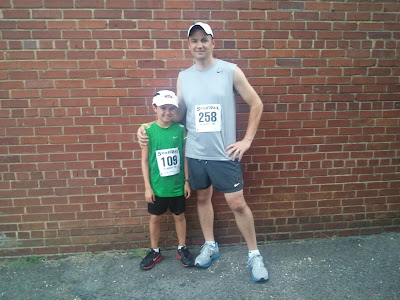 We're always looking for races to run.  We've also been waiting for Malissa's dad (the kids call him Opa) and step-mom (the kids call her Neina) to be able to watch Michael run.  So when we found this race in Salisbury, which is near Spencer, where he lives; plus he'd be working at a booth before the race, we signed up.

This was a night race, starting at 8 PM. It was part of a kids festival Salisbury was putting on. The festivities began at 4 PM, so we headed up there, grabbed a bite to eat and met up with Opa and Neina at around 4:30.  Malissa's brother Michael and his wife Sarah also were in town.

Opa's booth was one where you got to smash a car, that was fun... 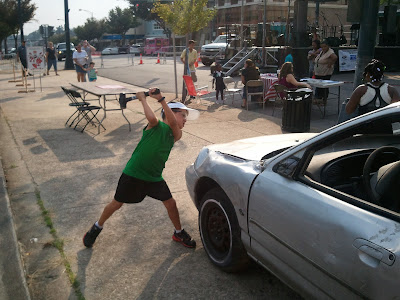 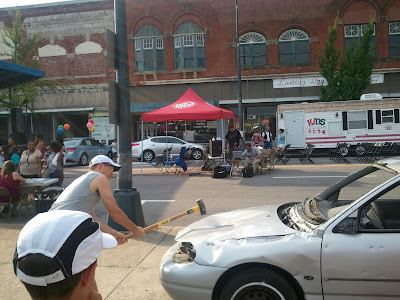 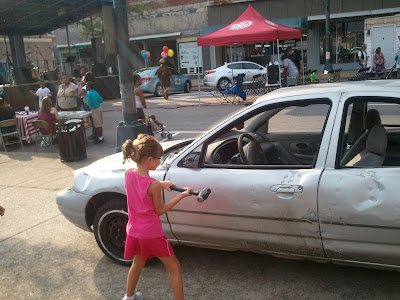 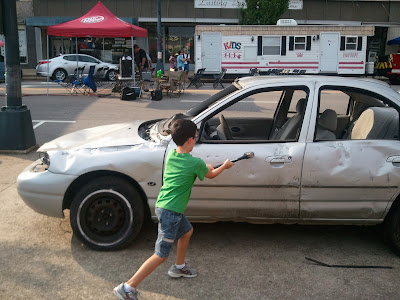 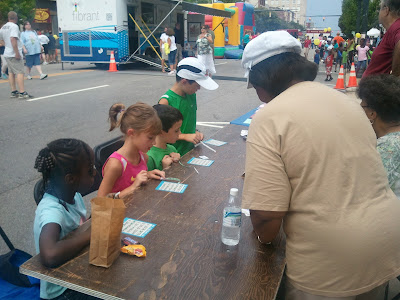 The weather turned nasty so we headed back to Opa's house for an hour or so, for some visiting time.  Carla's sister and her husband joined us there.

My goal for this race was anything below 23 minutes.  That's what it takes to qualify for the "A" corral at the Peachtree Road Race.  Michael had already qualified for that corral and I want to be with him.  I knew all I had to do was beat 7:25 per mile and I'd do it.

The race started and Michael said "See ya!" and he wasn't kidding, he was gone!  I never saw him again.  I ran the first mile at 7:00 flat.  I always start races fast no matter how hard I try to slow down.  The second and third mile were right around 7:20 each, so I did it!

Here's everyone while Michael and I were running: 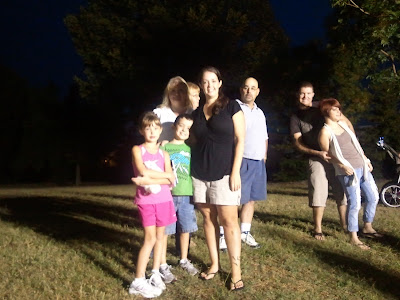 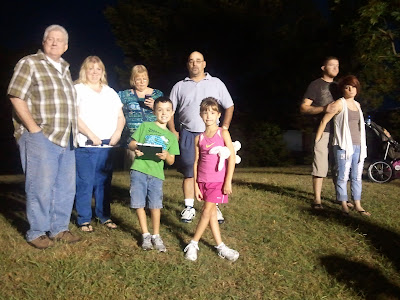 Here's Michael and I right after we finished: 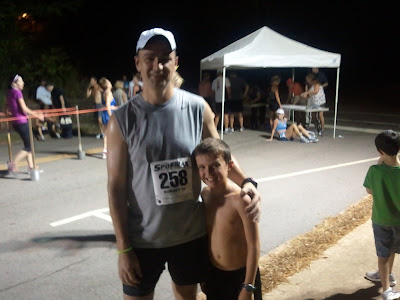 Then we went to the award ceremony, which was delayed by a band that did not want to stop.  I've never seen so many "one more song"s in my life.  I knew Michael would win his division, but I told everyone to hang around until they announce my division, because there was a slim chance I could place.  Sure enough, I had.  2nd Place in the 35-39 men.  My first AG award. 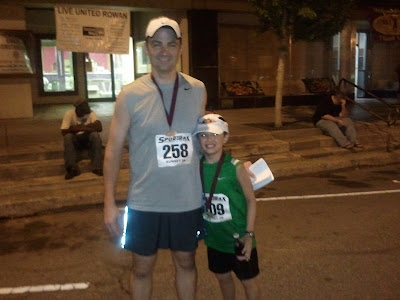 By the time the award ceremony was over, it was after 10 PM, and I had to get up at 5 AM for my 17 mile run (I know, bad scheduling) so we headed home.  Below is the Garmin data for the race and for my Saturday morning 17 miler.

Posted by Lillywhite Family at 8:20 AM No comments: