This post will be pretty short and sweet. I wasn't even in Nebraska 18 hours total, and I was by myself, so very few pictures.  It was late and dark when I arrived, and I was running before the sun was fully up.  After the race I had to rush to the airport and almost missed my flight home.

I've been waiting for the race to post the pictures they collected, but it's been three weeks now and I'm behind on my blogging, so I'm going to go ahead and post this without pictures.

Saturday afternoon, Malissa took me the the bus stop a couple of miles from our house.  I took the bus to the Charlotte airport.

The plane ride was pretty uneventful.  I flew to Chicago, then caught the plane into Omaha.

I landed in Omaha, which was about an hour's drive away from my hotel in Fremont, Nebraska.  By the time I made it to Fremont, it was 9:00 PM.  I ate at Applebee's, checked into my hotel at Holiday Inn Express, and went to bed.

I got up early Sunday morning, got ready, and drove the 15 minutes or so to Hooper, Nebraska.  Hooper is a very small town, with no hotels.

The race started and finished at a school in Hooper.  It was a very small race, only 65 marathon runners in total.  The course ran almost entirely on dirt/gravel roads.  I've trained on some dirt roads, but not many.  I didn't realize how much that changed things.  I didn't like it at all.  Each footstep, especially on the many hills, slipped just a little on the push off portion of the footstep.  That little extra effort takes a toll after 26 miles.

Going into the race, I knew they gave an award for the top 10 in each gender.  So I made that my goal.  I set a goal of 3:30, and paced myself for negative splits.  I stuck to my plan until mile 17, but then crashed pretty hard.  The hills were impossible to run, and I walked quite a bit the last couple of miles, turning my 3:30 into a 3:46.  I still finished in 9th place in my gender, and 10th place overall.  It's my first top 10! I guess that's one benefit of running tiny races.

After the race I knew I had to hurry to catch my plane home so I immediately went back to the hotel and showered.  I hurried and packed, checked the computer to verify my departing flight time.  It said it was at 2:20 PM, so I figured I had time for my traditional post-marathon meal at Five Guys.

I was sitting in Five Guys about 25 minutes away from the airport, when I looked at my phone.  It was 12:30 PM.  I remembered my flight left at two-something, but wanted to double check, so I checked my calendar on my phone.  It said my flight left at 1:20 PM.  I panicked, realizing I hadn't changed the time zone on my computer, so it displayed my departing time as 2:20 PM Eastern time, which meant it left at 1:20 PM Nebraska time.  I couldn't believe I had made that mistake.  I always put everything in the calendar accurately, including the correct zone, so that they will display correctly on my phone that changes time zone automatically.  And I always change the time zone on my computer for the same reason, but failed to since I was there such a short time.

So now, here I am in Five Guys, with a 25 minute drive ahead of me to the airport, and boarding was starting in 20 minutes.  I still needed to fight traffic, return my rental car, and run through the airport on legs that just completed a really tough marathon.  Somehow I did it, and was the last one on the plane.  They closed the door on the plane right after I entered it.

State #27 complete, still loving every minute of my 50 state challenge!  Here is my Garmin data:

Posted by Lillywhite Family at 7:34 PM No comments: 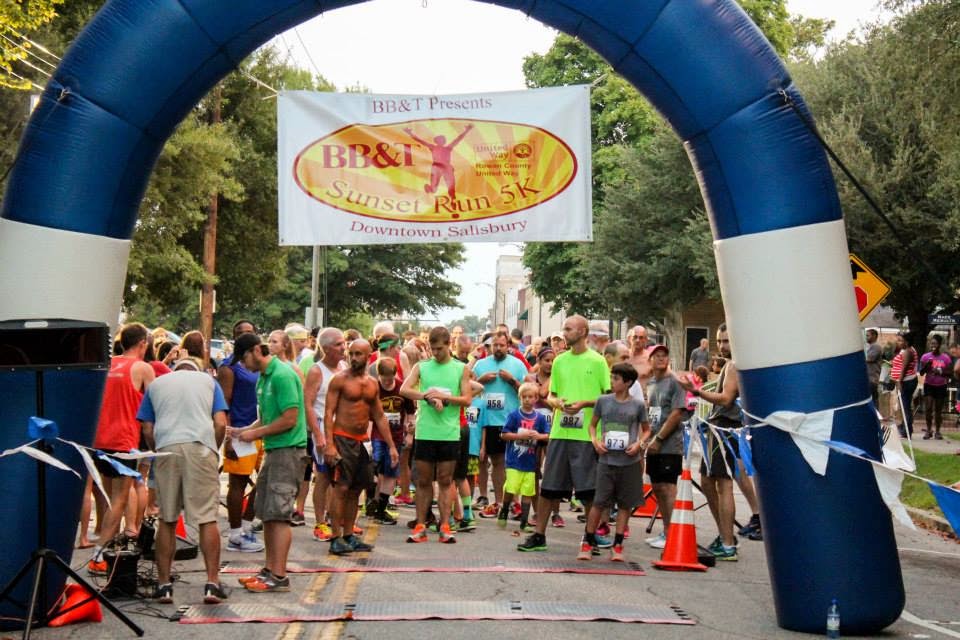 This is a fun little race we try to do each year.  It's held within a couple of miles of Malissa's dad's house in Salisbury, NC.

Only Michael ran it this year.  I had my Nebraska marathon in two days, so I didn't run it.

This was only six days after Michael's last 5k.  His finishing time was within two seconds of that race.  He is incredibly consistent.  As great as his times have been, now that we've started his half-marathon training, I suspect his times will get even faster. 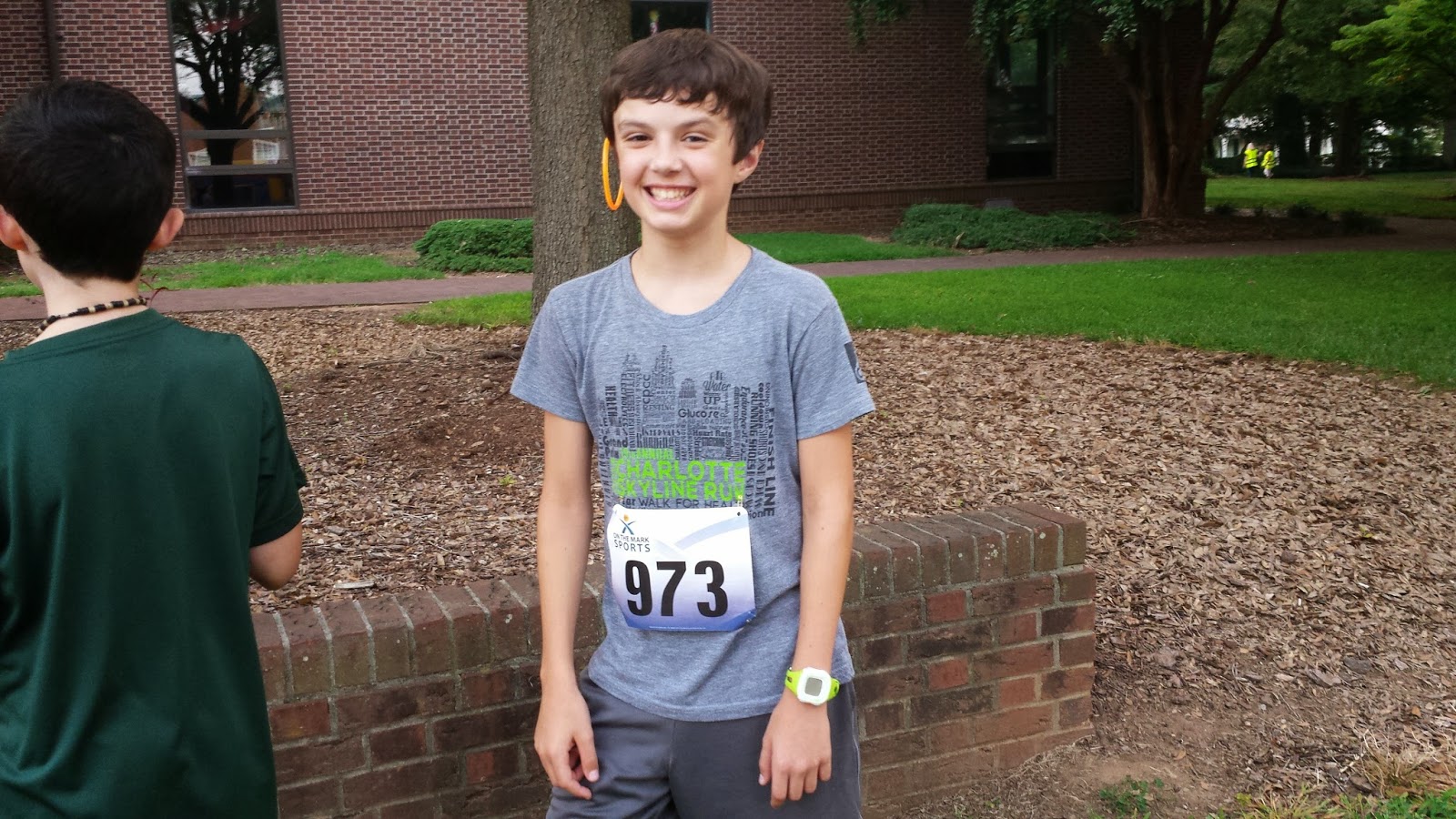 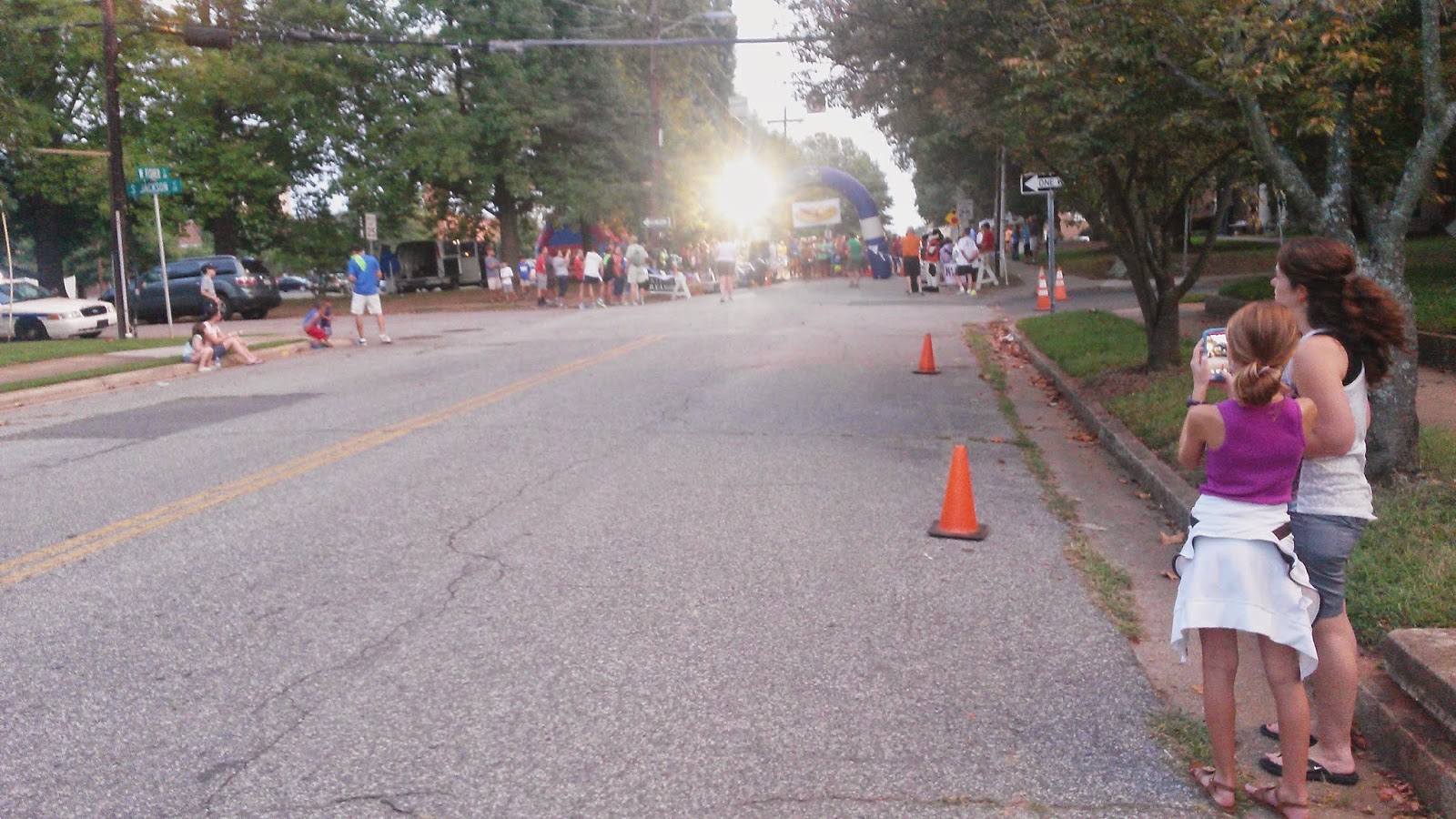 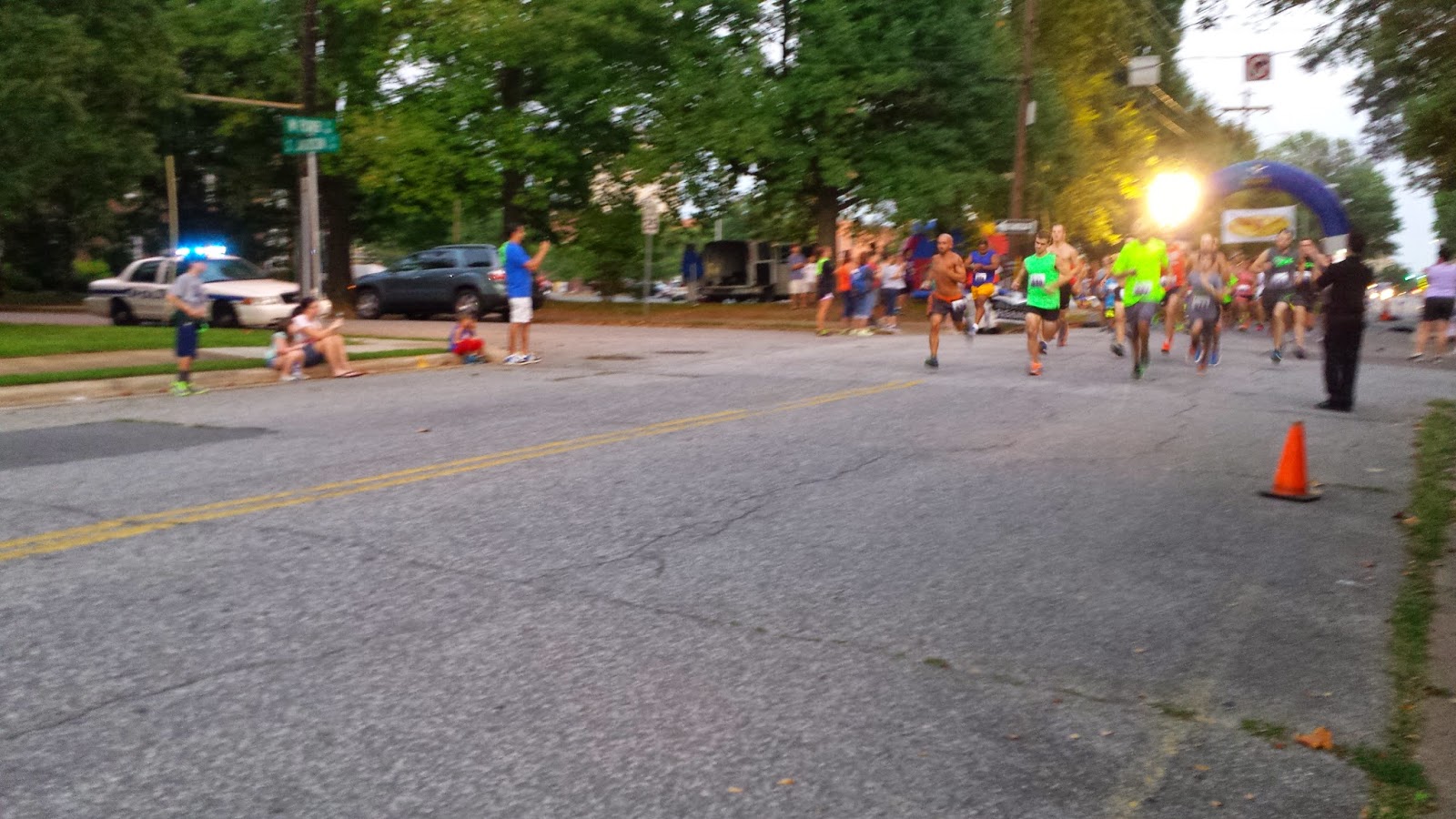 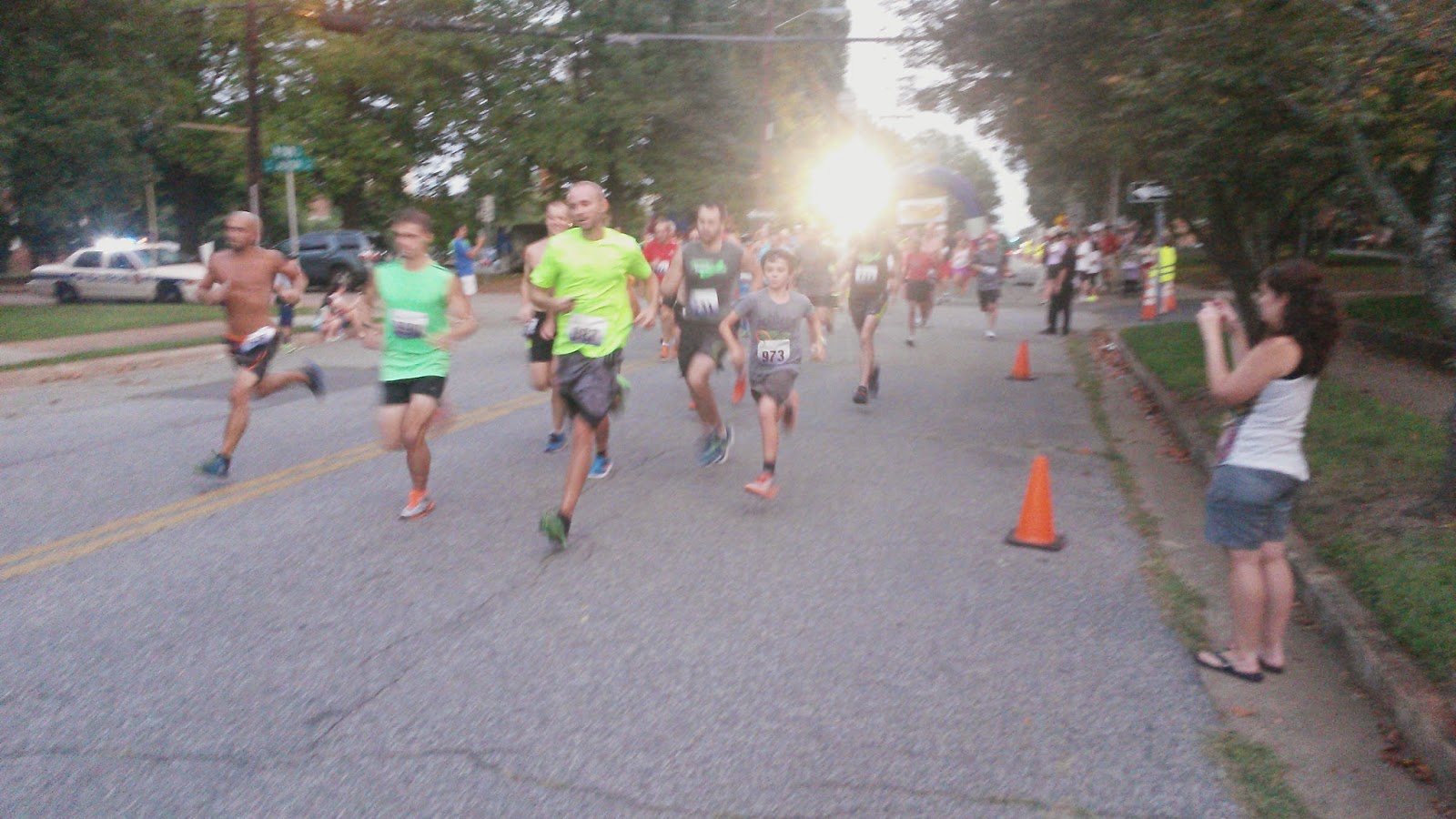 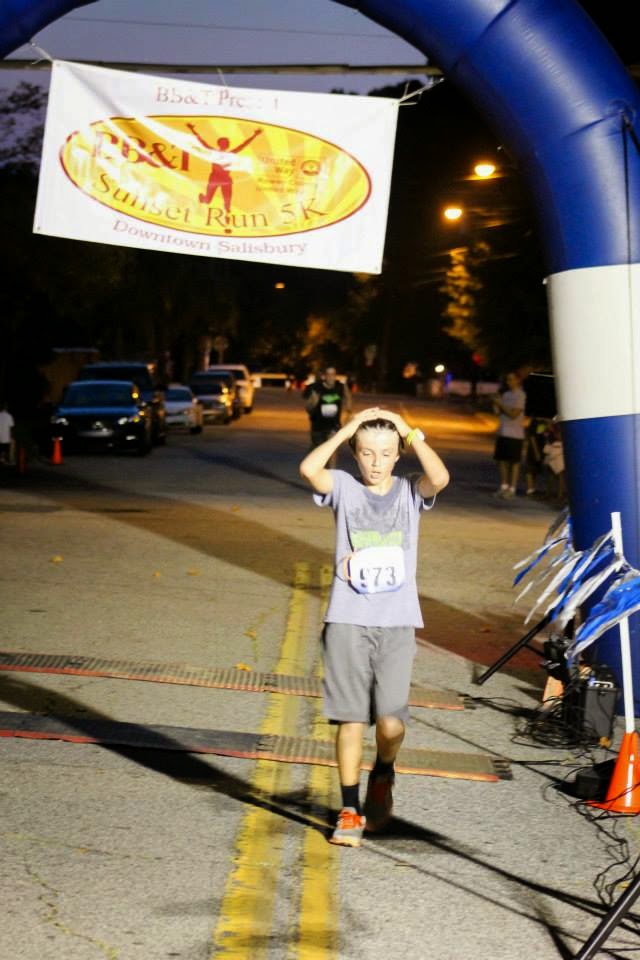 Here's our video of the event.  It started just before sunset, so by the time we saw Michael again it was too dark for good video:

Posted by Lillywhite Family at 8:28 AM No comments:


This part written by Owen:

This race was the last race in Run For Your Life's GPX Series.  Michael is in the very tough "19 & Under" division.  He entered this race in first place in his division and locked in that result with a great finish.

He hadn't trained very much this summer, but his 5k times are still excellent.  I can't wait to see how much he improves this year during track season, and now that he's training for the Thunder Road Half-Marathon.

Here's our video of the race and awards:

Michael's Garmin Data:
Posted by Lillywhite Family at 11:08 AM No comments: