Here's what I have to look forward to in the next six months (can't wait!):


All of these are the same scale except for Pennsylvania, it wouldn't fit on a 800 foot scale, so it's even more drastic than it looks.

Posted by Lillywhite Family at 8:41 AM No comments: 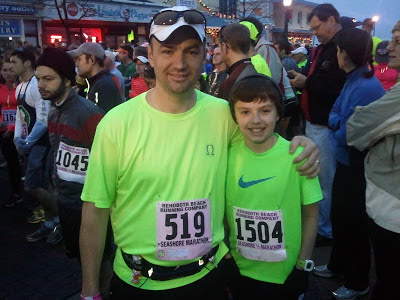 This part written by Owen, Michael's summary is below.

A couple of notes before I start the race recap:

Oh how I love running marathons!  There's a sentence I wouldn't have believed possible just over a year ago.  Now I've run 10 marathons in 10 different states in the past 13 months.  The travel is a lot of work, but the memories we've made as a family in that time are priceless.

Michael had a temperature of 104° just six days before this race, so he lost the entire last week of training, wasn't 100% recovered, and he still completed the half-marathon and was faster than than 92% of the people in the race (at 11 years old)!

We drove up Thursday afternoon to stay at my mom's house in Stafford, Virginia.  We stayed there Thursday night, then drove to Rehoboth Beach Friday afternoon.

My mom and step-dad stayed in the same hotel as us, which was awesome.  We got to spend a ton of time together in each other's rooms, on the beach, at the race, etc.


The entire weekend we never drove our car once.  Everything was walking distance from our hotel.  I love it that way.  Friday night we walked to the expo and had dinner at a cool pizza place.  Michael and I had spaghetti (lots of spaghetti).


The weather was overcast with the occasional drizzle.  I never got wet, and it was in the low 50's so it was actually perfect conditions.  Michael was planning on running about a 7:20 pace, which was way too fast for me.  We started near the back of the pack to force ourselves not to go out too fast.  As we passed the starting mat I wished him luck and he was off!

The first mile was very crowded since we started back with slower runners, but it accomplished the goal.  My first mile split was 8:07.  My goal pace was 8:30 per mile.  I didn't wear a pace tattoo because it was such a flat course, I knew I just had to stick to about 8:30, slow down a little at the end like I always do, and I should come in around 3:45. After my fairly poor performance in Richmond, I was pretty nervous going in to this one. My main goal was enjoying all 26.2 miles.

The first part was an out and back that put as at mile 5 when we were back near the start area (see Garmin data below).  Then there was a much longer out and back for the rest of the way.  That meant I saw Michael two separate times, plus the third at the finish when he was cheering for me.  Plus my family was cheering for me at mile 5, so the support was awesome.

Each time Michael passed me going the opposite direction, I yelled out to him.  That caused whoever I was running next to at the time to mention something like "can you believe that little kid is that near the front of the half-marathon?"  To which I'd proudly reply, "yeah, that's my son".  Both times, with different people, that caused about a five minute conversation about Michael, which I really enjoyed.

A good portion of this marathon is on a trail that is packed, but it had rained the night before so there were quite a few puddles.  Avoiding those was kind of a pain, and I must have got my left foot wet on one of them because from mile 6 on, the ball of my left foot hurt, not painful, just annoying.  I just knew it was going to be all bloody at the finish, but it wasn't, just a golf ball size blister. 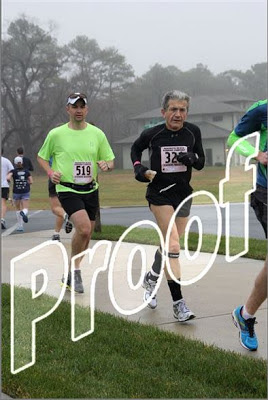 The course ran through some sand dunes for a few miles, right by the beach (on a paved path).  That was very pretty, even though there was no sun.  The crowd support was excellent, the volunteers were awesome.

Even though it was 17 minutes slower than my PR, I still consider this my best performance.  If every marathon can be that enjoyable, I will be one happy runner.

All in all a very good marathon.  A few things that were less than perfect: There was no finish banner (just the timing mats on the road), that was a disappointment. The lack of toilets both at the start and on the course.  I would have been in trouble if I was a girl.  I ended up just going on the side of the road around mile 10.5 after 5 miles of looking for a toilet.

After the race we spent some relaxation time at the beach.  The sun didn't make an appearance, but we still enjoyed it. 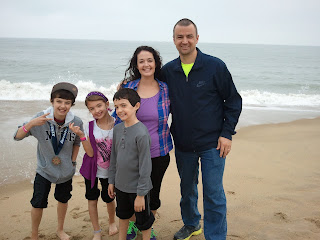 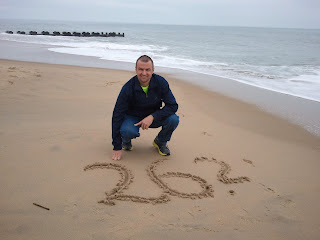 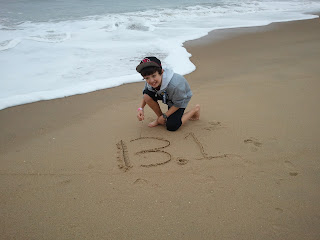 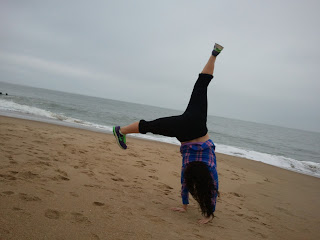 Here is my Garmin Data:


This part written by Michael:
I’ve been worried about this half marathon because I’ve been sick for the past week. Six days before the race I had a fever of 104 degrees. I was coughing all night before the race, but I drank some water and I was fine. FYI my mom said she didn’t want me to run the race. She said I could do it because I wanted to do it. Anyway come race morning I was feeling fine, and I wasn’t worried because I knew I had ran 2 other half marathons before.

So we walked to the start line and believe it or not I was really excited for this one. It was my first one by myself. I had gotten my first GPS Garmin watch a few days before so I could pace myself. I wanted to try and stick to a 7:20 pace for this one so I could beat my PR. So I felt really fine all the way through about mile 6. It was really beautiful and I got to see my family at 5. 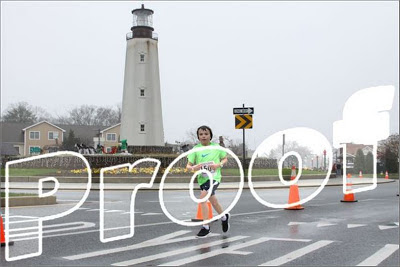 But at about mile 6 (I’m not sure) we entered a trail that was wet dirt mixed with tiny rocks that I did not like. We had to run on it though miles 11 ½. I kicked up a lot of dirt on too my shirt, and there were puddles everywhere. What sucked is it was out and back route on the trail. So on the way back everyone was cheering for me because I’m so little. (Even though I’m in the 6th grade) I know they were trying to support me and stuff but all of the “good jobs” got kind of annoying after a while.

At about mile 10 I knew I was not going to get my goal so I slowed down to about a 7:50 pace. Once I caught myself trying to slow down to a 8:15 pace so I sped up to a 7:30 pace for a couple minutes then I realized I could maybe do it for the rest of the race. Then I slowed down again. I was really tired I kind of wanted it to end but I was still enjoying it. I was pretty glad when I finished and we took a bunch of pictures of my dirty back. 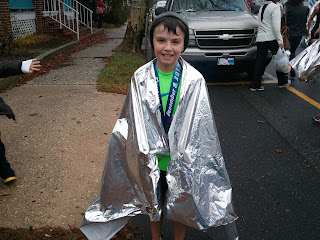 We got to eat at this tent thing with really good food. Runners got in free (And kids under 10) so my mom had to pay 15 dollars. So we walked back to the hotel and I took a shower. Then we walked back to the finish line and watched my dad finish. Then we did a whole bunch of stuff and went to bed. But the day after the race I was SO SORE!!! I had not ran that whole week including one of my long runs (8 miles). So I could not walk that whole day.

Here's video of us running: