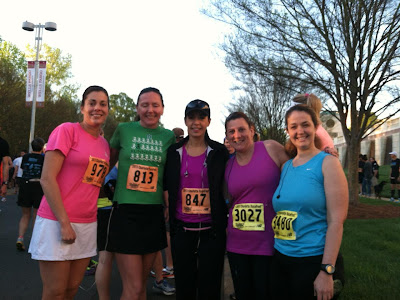 First off I would like to say that my heart is heavy for all the families that have been affected by the bombings at the Boston Marathon. I'm still struggling to put in words my thoughts about everything so I will just continue to pray for everyone. As a mom, marathoner, spectator/ cheerleader, it scares me but I will continue to run and will dedicate my Country Music Half Marathon race on April 27 to them. I am thankful to be apart of the great running community.

Here's my race recap from my 10k race on Saturday:
I ran the Columbia, SC Marathon Relay in March to get an idea of what my pace should be for the Country Music Half Marathon. I finished with some gas still left in the tank so I told Owen I needed one more race before I run the half marathon on April 27. The Country Music Half is really hilly so I was looking for a local 10k that had some hills. My friend Joana told me there was a 10k that went along with the half marathon she was running in with a friend from work. Lynne also wanted to run the 10k but we agreed to run our own races.

I went back and forth on what time I wanted to try for. It has been over a year since my last 10k (1:17:45) so I knew I would be able to PR but by how much? I have a short term goal of getting my 10k below an hour but knew as much as I wanted it for this race, I'm just not there yet. In my mind I thought I could run a 1:05 but finally decided to go for 1:07 out of fear of totally crashing. Once I decided on the 1:07, I had Owen print me a pace tattoo.

I haven't been nervous for a race in a long time, but for some reason this race gave me butterflies. I knew this race could go one of two ways; I could have an awesome PR or I could crash real hard and of course I was hoping for the PR. 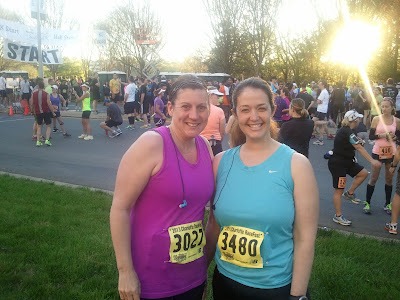 The 10k started on the left of the street and the half marathoners on the right. The first three miles were so crowded that I missed the first water stop. It was on the right and I didn't even see it until I was almost past it. I thought to myself, it's a good thing I don't need water yet. I believe it was right after three miles that we split off from the half marathoners. Because they had the 10k lined up on the left I expected at the split for us to go straight and the half marathon to turn right but at the last minute I saw that the 10k was to turn right. I'm sure I cut off a few people as I hurried to turn right.

There were rolling hills the first three mile and for the most part I was able to stick with my tattoo but I was a little worried that I might have pushed it a little too hard. Mile four is where I start to finally get in my groove and I was really looking forward to mile four because it was a nice gradual downhill. It was really nice to catch my breath a little. Mile four was a really fast mile for me and I was feeling more confident about my 1:07 finish.

I knew there was another hill coming. I felt really good going into the hill and was hoping I would run right up it, no problem, just like the other hills. Nope, this hill took everything out of me. I was crawling up it and even wanted to walk but talked myself out of it. After that hill there was another incline up to the finish line. I was in a lot of pain, I wanted to give up, but then I heard music to my ears. I could hear go Mom and go Malissa! Just what I needed to push me through the pain to the finish line. I didn't crash and finished with in 1:06:42! Lynne was right on my tail with a 1:12. 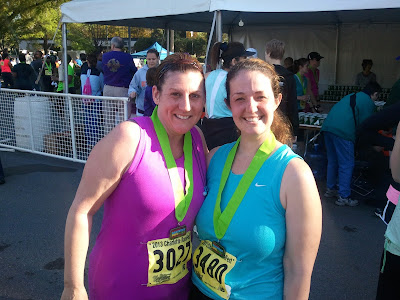 Joana finished her half marathon shortly after. Oh and guess what? Joana had an emergency root canal two days before her half marathon. I repeat two days! Now that's determination and dedication with a little bit of crazy :)

Here's a quick video of our start and finish: 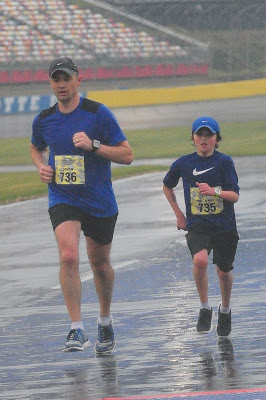 I ran this race in 2012 (its inaugural year).  Michael wanted to run it really bad that year also, but couldn't because he was only 10 years old and the race website said you must be 12 years old to run.

So when I started to see advertisements for the 2013 race, I emailed the race director. I explained how much Michael loves running, how this would be his 4th half-marathon, and about how he is always such a star at every race he runs.  Hoping for PR reasons they would let him run.  They responded and to my surprise, gave him the green light to run it as long as I run it with him.

So he started his training back up, running along my side while I trained for my numerous marathons.  He is incredibly disciplined, waking up earlier than he needs to on school days so we can go run 5 or 6 miles.


As we were keeping warm in the garage before the race, there was a news reporter getting ready to do his live feed.  He asked us if we wanted to be interviewed live on the air. We said yes, and he interviewed us for a couple minutes for the live news.  We haven't been able to see it yet, but he said he'd mail us a DVD of the segment. UPDATE: Here is the interview:


I struggled coming up with a race strategy for this race.  Michael wanted to PR.  He only gets to do one or two half-marathons per year so I really wanted him to get his PR, but I also really wanted to run with him.  I get so much enjoyment observing how other runners react and treat him.  They are so amazed, so kind, and so supportive.  I had just run the RNR USA Nation's Capital Marathon 8 days before this race, so I was almost certain I couldn't run as fast as Michael needed to run to PR. He would need to run 7:21 per mile on a course that has some hills, and on a very cold and windy day.  I decided to give it a shot.  I told him I'd run  a 7:20 pace as long as I could and then I'd drop off and wish him luck.

The race started and we both were locked on our pace per mile, that we created using Taz Running. I knew I could keep up with his pace for the first few miles, I was just uncertain of how long I could keep it.  Each mile marker we passed, I assessed how I felt and was surprised at how good I felt.  At mile 9 there was a pretty brutal hill that really hit us both hard.  We survived it, and were still ahead of pace by about 30 seconds. 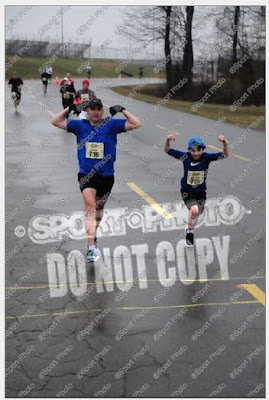 Mile 11 through the finish are back inside the race track.  This is when the weather really turned on us.  The rain got harder, the wind was stronger, and our determination was really tested.  I wasn't hurting, but really had to give it everything I had to stay on pace.  I knew Michael was struggling also.  I really wanted him to get his PR.  I told him at mile 12 that I was slowing down and didn't think I could do it.  He passed me immediately, but then his pace was not fast enough either.  I told myself it was now or never.  If I could somehow gain enough strength to push him, he could do it.  So I did.  We pushed it hard and finished at 1:35:57, 22 seconds faster than his previous PR.

We crossed the finish line at exactly the same time, but he must have been behind me by a second at he start, because his chip time was one second faster than mine.  So now his PR is better than my PR by a second :). 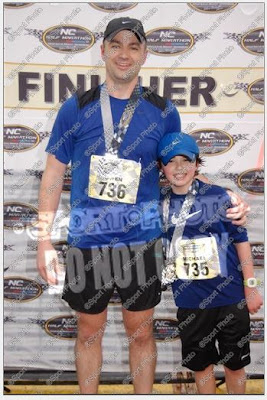 Michael crushed his division of 14 and under, beating 2nd place by over 19 minutes.  Check out the size difference: 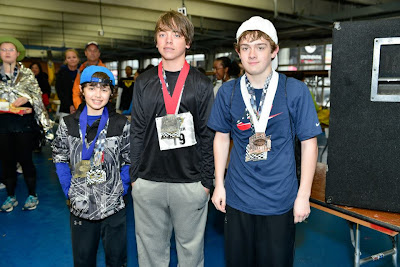 This race was so much fun.  I count my blessings every day that I have such a supportive family, and such an incredible running partner.

Here is video that Malissa shot during the race (there was supposed to be music but YouTube erased it because of copyright.):

Here is our garmin data:

Posted by Lillywhite Family at 2:00 PM No comments: