This is a Friday night 5k, which is fun for a change, but overall I very much prefer Saturday and Sunday morning races. We ran this race in 2011 and had a blast.

We had not planned on running this race, but two days before we got an email reminding us that it was taking place.  I looked at my training schedule to see if it fit.  I'm two weeks away from my marathon, so I'm in the "taper" phase of training.  Thursday, the day before the 5k, was scheduled to be my off day.  Friday was scheduled to be a 4 mile "race pace" run.  That was too perfect, so I signed us up.  Kyle and Alicia are still training for their race in November and aren't quite ready for a 5k yet, and Malissa has a 15k the following weekend, so it was just Michael and I for this race.

This race is in Salisbury, NC, which is just next door to Spencer, where Malissa's dad and step-mom (Opa and Neina to the kids) live.  They were able to come and cheer us on, which was awesome.  In fact, the route took us right by where Opa works.

Michael had a goal of trying to beat his PR of 19:43.  I had a goal to beat 20 minutes, which is quite a bit faster than my previous PR of 20:30.  Both of our goals turned out to be too aggressive, since it was a night race and was pretty warm (mid 70's).  In the morning, you still have every bit of your energy, quite different than how you feel after a work/school day.

Michael's goal pace was just a few seconds faster than mine, but when the race started I found myself in front of him.  After about a half-mile, when the initial mass of people had cleared out, I looked over my left shoulder and there was Michael, just a few feet behind me.  I kept to my goal pace of 6:25, expecting Michael to pass me at any moment.  He never did.

I could actually see the lead cop car up ahead.  This was a smaller race, so there weren't any 16 and 17 minute finishers like there are at most 5k's we do.  By the time I had picked off all the runners who started too fast, I could count 3 or 4 runners ahead of me.  I looked behind me and couldn't see Michael, but it was pretty dark.  I kept holding out hope I could pass 1 or 2 of those guys and grab a top three finish, but it didn't happen.

My first two miles, were perfectly on pace for my plan (6:21 & 6:26).  The first mile was gradually down-hill, the second started down, then finished up.  The third mile was all gradually uphill.  I didn't crash, but couldn't maintain my pace and ran the third mile in 6:41.  My finishing time of 20:28 was a PR by two seconds, so I'm really happy with it.

After I finished, I turned to see where Michael was. He crossed the line at 21:22, just 54 seconds back.  He told me he had a small stomach cramp that slowed him down, and that it was really hot.

We both took 1st in our divisions, so we stuck around for the award ceremony and then went to Cookout for some ice cream.  While we were at Cookout, it started raining really heavy.  I was thankful that didn't happen during the race.

Here's video of the awards, followed by my Garmin data:


Posted by Lillywhite Family at 8:36 AM 2 comments: 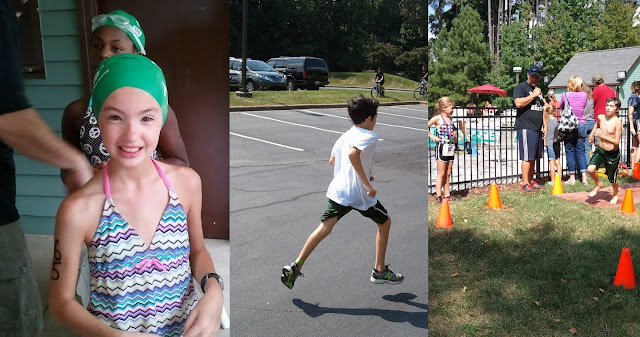 Written by Alicia:
The triathlon was really fun. I was probably best at the run but I enjoyed the bike the most. The swim was definitely my weakest. I enjoyed the swimming but we scarcely go into the pool. It was really fun and I hope to do it again next year. 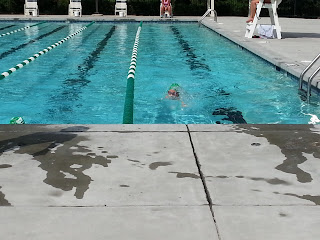 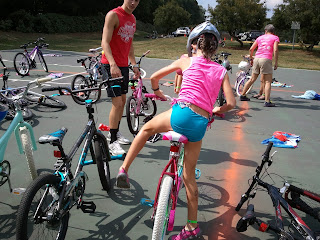 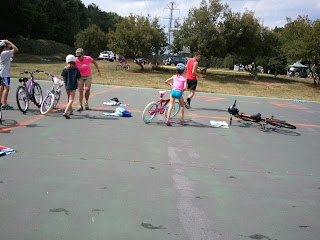 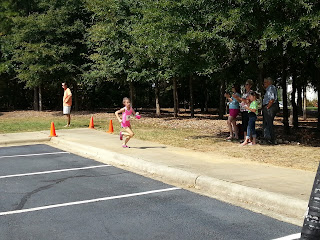 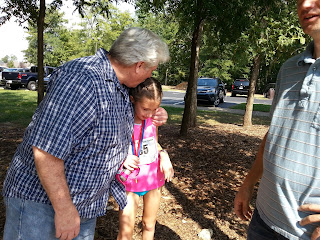 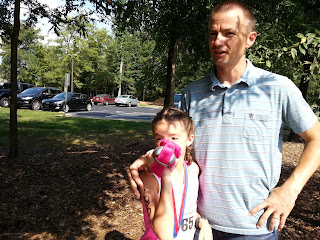 Written by Kyle:
The triathlon was pretty fun, and I was definitely ready for the biking part because I bike a lot during the week. The part that was real hard was the swimming because our pool is closed now. I took 11th in my division, but I still tried my hardest. 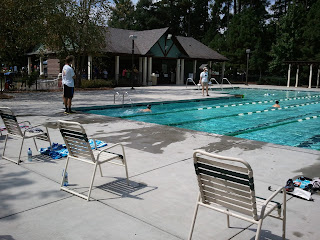 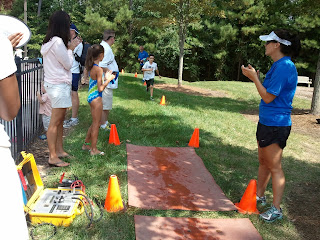 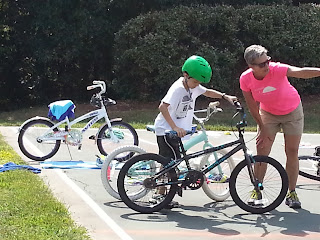 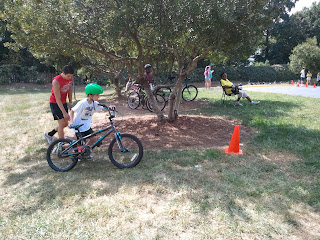 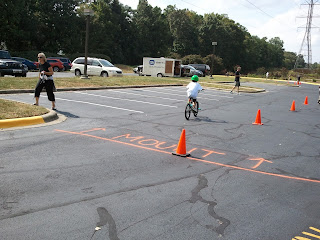 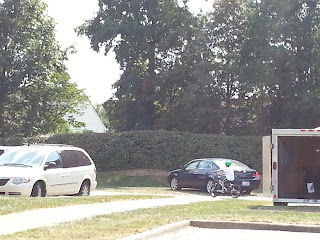 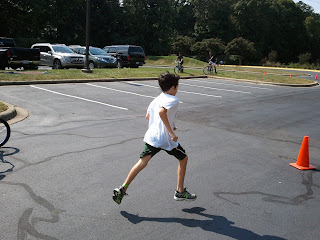 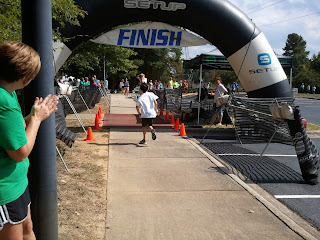 Written by Michael:
The swim was really hard; I went to fast on the first lap. Then I just ran out of gas, my goggles filled up with water. The transition was time consuming; it took a while to get my shirt on. The bike was hard on the up-hills, but really easy on the down-hills. Once the bike ended, I didn't know what to do at the transition, the people were already dealing with someone else. So I threw my bike on the ground and ran. I was pretty far behind on the run. I caught up to first though. The kid in first kept getting in front of me; he wouldn't let me pass him. It was annoying. I got ahead of him, but then he took a shortcut around the corner coming into the parking lot, we turned right, and then turned left. When we turned left I got off the road for a split second, just so I could pass him because he was in my way. I technically won but, we both kind of cheated a couple times throughout the race. 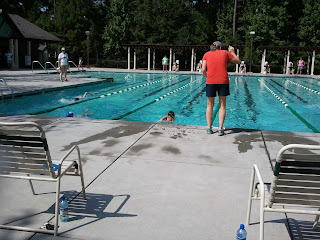 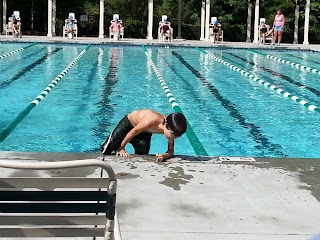 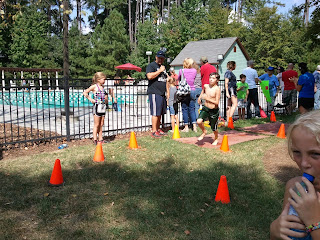 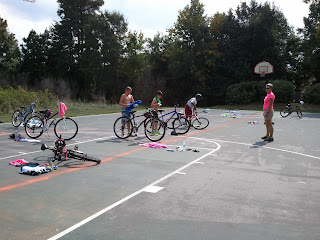 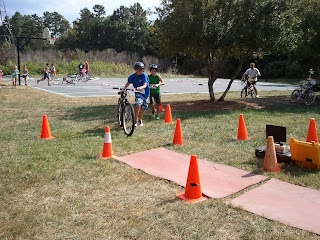 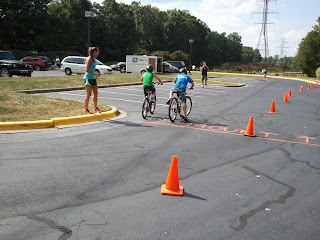 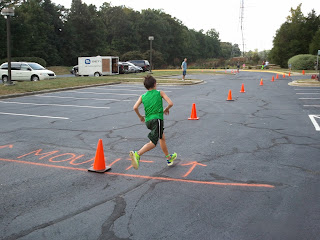 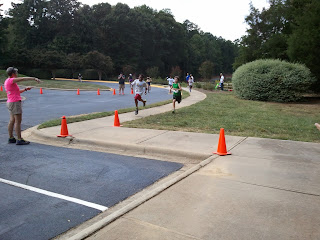 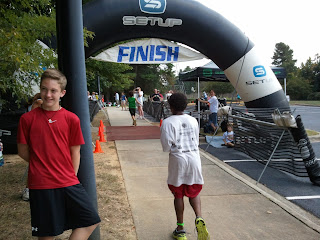 Posted by Lillywhite Family at 5:29 PM No comments: