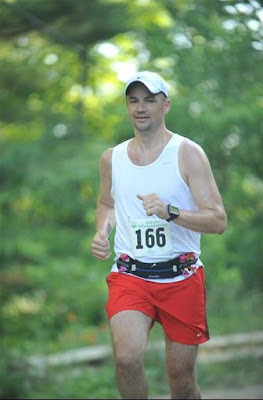 Wow, what a race! I had this race on my radar 8 months ago, but then took it off my schedule when I decided I wanted to run Grandma's Marathon.   Then, when talking about a Father's Day present, I came up with the idea of sending me to Vermont to run this race after all.  Malissa reluctantly agreed.  So the Mad Marathon was back on my schedule, only 22 days after Grandma's.

Saturday morning I got up at 2:45 AM so I could do my traditional 2-miler the day before the marathon.  My flight for Vermont left Charlotte at 6:07 AM, but I am always at the airport early.

When I went through security, they pulled my carry-on aside and asked whose it was because they were going to have to search it.  I realized I had forgotten about the 3 oz. liquid rule.  The TSA guy was nice, and offered to mail home my sunscreen, face wash, and (embarrassingly) my diaper rash cream. Yes, it helps with chaffing in marathons. I told him just to toss them, that I'd buy more.

I had booked a room at the Sugarbush Resort, which is a ski resort in Warren, Vermont, about six miles from the start/finish line.  They have lots of different hotels on the resort, all operated by Sugarbush.  They are designed as ski hotels mainly used in the winter.  Most don't have air conditioning.  The day before my trip I got a call from them saying that they weren't sold out, so they were upgrading me to their best hotel that has air conditioning.  I didn't realize the one I booked did not.  I am SOOOOO glad they did that, not only because it was so much nicer, but it was quite warm and I know I wouldn't have got as good of sleep without A/C. When I arrived at the hotel, I was shocked at how luxurious it was.


Warren and Waitsfield do not have stoplights, no chain stores, no Walmarts, no fast food.  After I got checked in to the hotel room, I went from gas station to gas station looking for, of all things, diaper rash cream (if you skipped to this section without reading above, that sounds pretty weird).  Finally, I found a regular grocery store and was all set.

The expo was at the Farmers Market going on that day in Waitsfield.  Really it was a Farmers Market with one stand selling running stuff.  But it was fun.  I bought some jalapeno cheddar bread for my carbs and some Vermont Peanut Butter for the kids (which I later threw away because of the security issue, when will I learn?).

I had planned on doing all the festivities, but because I was by myself and I had started my day so early, I skipped watching the kids fun run and the ice cream party, and just went back to the hotel for some carb bars and the bread I bought for dinner.  I set my alarms (phone and room clock) and was fast asleep after a long day.

The marathon start time was 7:00 am, which I would definitely change if I was the race director.  It was light at 5:30, and pretty warm when I finished at 10:48 am.  Finishing an hour earlier sure would have been nice.  But, it did mean that I got to sleep until 5.  I always wake up two hours before start time so I can eat a bagel and a banana and have time for my stomach to digest it.

At the starting line, I kept telling myself: "Go Slow".  After my horrible Grandma's Marathon, I wanted to just enjoy this.  A PR on a course like this was impossible, so might as well just enjoy it.  I'd like to finish each of the 50 states in under four hours, so that was my main goal.  When I was creating my pace tattoo from Taz Running, I used 3:50, to give myself some margin for error.

Here is my pace tattoo, next to my actual splits.  Of course, the first few miles are fast, I really tried but just could not slow down.

On fresh legs, I couldn't slow down to my planned pace, later on I couldn't run as fast as I had planned, but overall I beat my goal time by almost two minutes.  The course was beautiful, I really enjoyed every mile.  I never "hit the wall".  After the half-marathoners split off, it was very quiet, one runner every few hundred yards.  There were only 271 marathon finishers, but I never felt alone.  The water stations were plentiful, I really never had a problem at all.

The hills were definitely the theme to this course. When the supporters at mile 16.5 told us, as we rounded a corner, that we were at the highest elevation point, it might as well have been angels singing.  That was music to my ears. I knew I still had some hills, but the biggest elevation climbing was over.

My muscles were pretty beat up, though.  Even on the downhills I couldn't hit my goal times at the end of the race.  I'm still really happy with the race and with my time.  I really enjoyed it.


After the race, I hung out at the finish area and watched some of the finishers come in.  I love watching people cross the line, with all the emotions I know they are feeling.  I headed back to my hotel room.  The only thing left on my agenda for the weekend was my appointment with a tattoo artist.  I have been planning to get a marathon themed tattoo ever since before I ran my first one back in November of 2011.  Sadly, I don't have any pictures of the actual process, but here are a couple of the finished product. 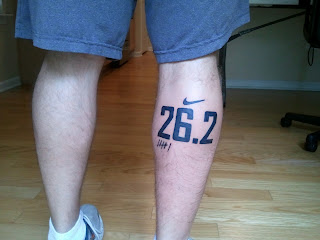 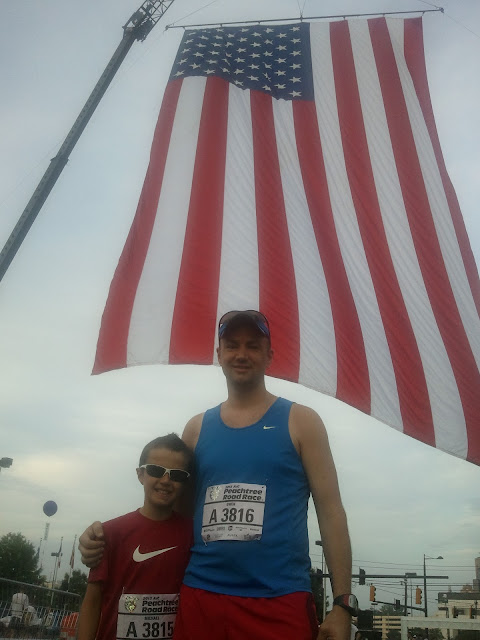 Last year's Peachtree was so much fun, we just had to do it again. Last year I didn't get to run with Michael because I hadn't officially qualified for the 'A' corral like he had.  So I was super excited to run this one with him.

We made a quick trip out of this race since we are doing so much travelling this summer.  We drove down Tuesday afternoon, ran the race Wednesday morning and were back home in Charlotte by 3pm in time for a great 4th of July celebration at our neighbors' house.

We booked our hotel at the same hotel I stayed at for the Publix Georgia Marathon in March. For that trip I stayed by myself, but noticed the hotel was dog friendly and had great access to MARTA (train station).  Bringing our dog, Graycie, on a trip for the first time, we were nervous, but she behaved wonderfully and we had a great trip.

Tuesday Michael and I walked to the train station and went to the expo at the World Congress Center by ourselves while Malissa, Alicia, Kyle, and Graycie relaxed at the hotel. We picked up Subway sandwiches and brought them back to the room to have our pre-race meal.  Graycie still barks at noises so we didn't feel comfortable leaving her in the hotel room alone.

Wednesday morning Michael and I again walked to the train station and joined thousands of other runners heading to the race.  We got there about an hour before the start.  Here is a picture from our corral at the wheelchair start.

I left our goal pace up to Michael.  His previous PR for a 10k was 46:23 from the Hot Chocolate 10k in Asheville, NC in January.  He originally had chosen that as his goal time, but while training he felt he could do even better and a couple of days before the race decided he wanted to be paced to beat 45 minutes.  I have a marathon four days after Peachtree, so I had hoped to take it a little easier than that, but I told him we could do it.

I ordered my temporary tattoo from Taz Running, here is what it looked like:

So that was our plan.  When we passed the first mile marker, Michael didn't see it but he heard my watch beep.  He was very surprised and asked "Are we already at mile 1?".

Same exact reaction at miles 2 and 3. He said he was feeling great and acted like he wanted to go faster.  I told him to be patient, and wait to see how he felt after the first couple of hills.

Miles 4 and 5 are slightly uphill and he still felt good but no longer wanted to try and push it.  When we turned on to 10th Street (approx. mile 5.75), he was shocked that the race was almost over.  I told him he could run whatever pace he wanted from then on.  He immediately took off.  After he got a bit in front of me, I decided I'd try to surprise him and keep up.  I couldn't do it.

When I was really close to the finish line I looked at my watch and saw that I only had  20 seconds until 45 minutes.  I full out sprinted that last 20 seconds to cross the line at EXACTLY 44:59.  Michael had finished just ahead at 44:45.

Here are our splits: 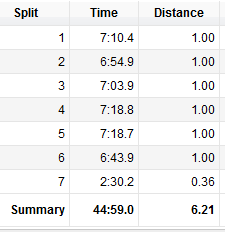 I love the Peachtree Road Race, it is so well organized and so much fun.  If I keep getting in, I'll keep coming back.