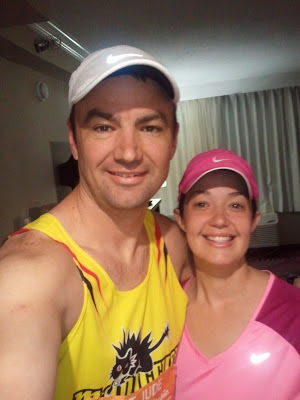 This part written by Owen:

Malissa and I traveled to Nashville by ourselves.  The kids stayed in NC; Michael with Opa and Neina, while Kyle and Alicia stayed with the Alves in Charlotte.

When I first looked at the 10 day weather forecast, 10 days before the race, it called for beautiful conditions.  Each day after that the forecast got worse and worse.  By the time race day came, they expected heavy rains with temperatures barely at 50 degrees.

This trip was a challenge, starting the moment we arrived at the hotel.  The jerk at the front desk (he really was a jerk) told us our reservations had been cancelled.  Of course, I didn't cancel our reservation, it must have been some computer glitch, I had my printout with my confirmation, but that didn't help.  He had room in the hotel, but at a rate double what I had reserved it at.  We were there, we needed a hotel, so I paid it, figuring I would fight for my money back later.  I didn't want to mess with it at the time.

In addition to that, our hotel was being renovated.  The entire hotel was a construction zone.  You could write your name in the dust on the furniture in our room.  While we were checking in, someone called down and said they didn't get room service, and the jerk told her it was probably because she had the 'Do not disturb' sign on her door.  So they asked for towels and he told her they'd have to come get them because he doesn't have anyone to bring them up to her. While he was saying that, his co-worker wasn't doing anything and whispered she'd take up some towels. He told her no and hung up on the guest.  The next day we overheard the front desk person tell someone on the phone that they were out of towels.  Needless to say, Days Inn will not be getting our business ever again.  (I chose it because of its proximity to the finish line.)


We decided we'd put all that behind us and try to just enjoy our trip.  We made our way to the expo, which was nice. We got to meet Kara Goucher, fresh off her great run in the Boston Marathon. She signed our bibs and posed for pictures.  After the expo, we had a nice meal at a small Italian place called 'Mirko Pasta'.


Saturday morning we woke up a couple of hours before start time, since we had to catch a shuttle to the start.  Our hotel was 0.4 miles from the finish, but about 5 miles from the start.  Because of the rain, we got dressed in our garbage bags, which really helped.  For future rainy races, I'm going to pack bags to tie around my feet before the start. My feet were water logged before the race even started.  For this race it wouldn't have mattered, though, because the rain never let up.

We got to the start about an hour early.  We stayed dry in a gazebo at a park near the start until about 20 minutes before start time.  We made our way to the start, said our goodbyes and each found our corral.  The rain really started to pick up and because we were standing still, it was freezing cold.  The garbage back kept me dry, but was not enough to keep me warm.

The race started about 10 minutes late, they kept announcing it would start soon, but that they had to tow some cars that had parked on the course near the start.  Finally it started.  I kept the garbage bag on for the first three miles until I was warm, then I took it off.

I was never cold during the race, just very, very wet.  There were parts of the course, where we had to run through several inches of water, so keeping the feet dry was not an option.  I was really worried about blisters, but thankfully, I never got any.

Running in that heavy of rain for over 3.5 hours is mentally challenging.  But I never crashed, it got hard, and a few muscles were hurting, but I never hit the wall.

Here is my Garmin data:


The rest was written by Malissa:

Still on a high from my 10k PR, I was pumped for this race. In my gut I know that if I was racing on a flat course I could run a 2:20 if not better. Since this was not a flat course I decided to set a goal for 2:29 and if I felt good after the first half I would pick it up a little. 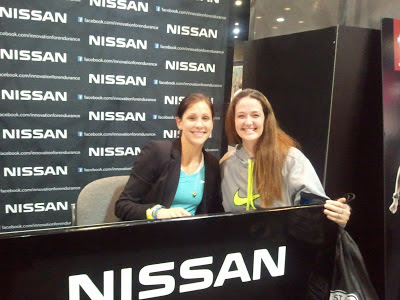 I am a HUGE Kara Goucher fan. We are best friends, she just doesn't know it. I was so excited when I found out she would be at the expo. I had a bunch of things I wanted to tell her but in true Malissa style I froze and just smiled...lame.

I knew going into race day that it would most likely rain the whole race.  It drizzled a little on our way to the start line. By the time the race started it was a heavy rain. About a half mile into the race I had a feeling it was going to be a mental race. Little did I know just how mental…

Like always I had trouble slowing down the first two miles. I knew mile three through five would be my toughest, it was basically one long hill, so I made myself slowdown in the beginning of mile three.

I’ve been struggling with some hip discomfort for about a year now. I usually don’t feel it until mile eight or so but it started to bug me in the middle of three.  I pushed through the pain up the long hill and as I was coming down the hill (mile six to six and a half) it started to hurt worse.

Mile nine and ten were downhill again and the pain was now shooting down my left leg. Before the race I was looking forward to the downhills and now I was cursing them. By this time I was ready to give up.  I was mad, frustrated, sad, and was having a hard time fighting the tears back.

As much as I wanted to give up, I knew I couldn’t. I was not just running this race for me, I was running it for the three people killed in the Boston Marathon bombing and the many that were injured. Their faces kept flashing in my head. I thought of the ones without legs and I kept running.

I prayed that God would give me the strength to keep running through the pain. I strongly believe that God has a sense of humor and I was reminded of it on mile twelve. As people were passing me I kept hearing them say, “Oh wow look at that”.  One person said, “Maybe it’s because of all the rain?”  I was starting to get self-cautious and I was trying to figure out what they might be talking about. I notice that the bottom of my butt felt weird, kind of heavy, so I thought maybe water had built up in my pants. I wiped my hand across my butt to see if I could knock the water out but there was no water. No there wasn’t water build up, there was suds build up! I could not believe it! I guess our washer doesn’t do the best job rinsing out the soap, mix that with the friction of me running, and you get a bubble machine?!

I was so embarrassed that I didn’t notice the pain in my hip and leg as much. I just wanted to hurry and get to the finish line so I could wrap something around my waist.  Thankfully the last mile was pretty flat. I didn’t make my goal time but thanks to my awesome first half I finished with a time of 2:39:26, which is an average time for me.
After the race I loaded up on goodies and then waited an hour in the pouring rain for Owen to finish his marathon. I was in so much pain and didn’t feel like fighting the crowds to get back to the finish line so I waited for him at the family meeting place. Now that I’m sitting in my nice, warm, dry home; I wish that I would have fought the crowds to see him cross the finish line. He said it was his strongest finish yet and I’m sad that I missed it.

I’ve been dealing with a lot of different emotions since I finished the race but mainly I’m just frustrated. Frustrated that when I finally started believing in myself, my body gave out of me. I had a small pity party for myself and now I'm ready to move forward. The past couple of months I have been planning some new goals that I wanted to work towards after this race was over. I'm going to give myself some time to recover and then I'm going to start working towards them. I had already decided before this race that I wanted to run a FLAT half marathon this fall and then a FLAT full marathon this coming winter. I have four different races picked out since I'm not sure when our house is going to sell and when we will move: If we're in Utah I want to run the Layton Half Marathon and the California International Marathon. If we're still living here I want to run the Outer Banks Half Marathon and Myrtle Beach Marathon.
I guess the chorus to my life is:  I get knocked down but I get up again. You're never going to keep me down... I just wish I didn't get knocked down so much. For once I would like to be naturally gifted at something...grrr pity party over!

Here is my Garmin data:

Posted by Unknown at 9:28 AM No comments: