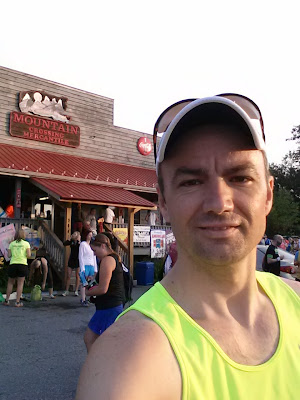 I signed up for this race so I would know what a downhill race was like and to prepare my body.  It is much more downhill than the St. George Marathon, but I wanted to know how my body would respond and how fast I could run downhill.

This course is run in a very remote area in the Pisgah National Forest, starting in a town called Jonas Ridge, NC.  It is so remote there is no parking at either the start or the finish.  We had to park several miles away, then we hopped on buses for the 40 minute drive to the start. After the finish, we got back on the bus to go back to our cars.

Because of the logistics, having someone watch and support you was next to impossible, so I decided to do this one by myself.  I drove up to Lenoir, NC on Friday night.  I stayed at a Days Inn, checked out at 5:00 AM on Saturday morning and drove up to the staging area at Brown Mountain Beach Resort.

I wasn't guaranteed a spot on the shuttle, as they were full when I reserved.  If I didn't get on I would have to drive to the start, struggle to find a place to park my car, then try to catch a ride with someone back to the start after the race to get my car.  Luckily I was there early enough and the first bus wanted to leave before it was full, so I was able to get on.  PHEW!

They dropped us off at an aptly named Marathon gas station in Jonas Ridge, NC, about 1/4 mile from the start. Packet pickup was right there at the gas station before the race.  There was no packet pickup the night before, which made me nervous.  I'm always worried they will have lost my bib, but no troubles at all this time.

Going in to this race, I had two goals.  My first goal, and one that I didn't think I'd have a problem with was to get a new half-marathon PR.  I'm more fit than I was at my previous PR (1:35:58), plus it was on a pretty difficult course, and I ran it 8 days after a marathon.

My more aggressive goal, but one I didn't think I could reach was to qualify for the sub-corral at next year's Peachtree Road Race 10k.  I would need to break 1:33.

So I made a pace tattoo for each of those paces, one on each arm.  I decided I'd start at the pace of the more aggressive goal and fall back to the other arm if I couldn't keep up.

The horn sounded and we were off.  The first approximately two miles were on a paved road and were flat, with even a little uphill.  I was able to stick to my aggressive plan.  Then the road turned into a dirt/gravel road and the downhill began.

I stuck to my aggressive plan and was actually beating the splits.  They had warned us that the mile markers throughout the course were wrong.  I had to trust my watch, which because of all the trees, I was worried might be off.  It turned out to be perfectly on, and I ran the tangents really well, and there were a lot of switchbacks.

I knew going in that mile 8 was the steepest downhill.  Because the race was more than half over, I decided to really let gravity do its thing and not hold back.  A quarter of the way through that mile, I looked at my watch and my lap pace for that quarter-mile was 5:45!  That blew my mind.  I ended up running that mile in 6:32.

It was amazing whenever the course would flatten out or even go uphill for a little bit, how hard it was after pounding your legs on those downhills.  I look at the elevation profile and those hills are nothing.  But running them was brutal!

With a few miles to go I started to become optimistic that I could break 1:33.  Then at mile 11, I started getting a really bad side stitch.  That happens to me when I look down at the ground for extended periods, which I do when I am brutally tired, and when I have to watch where I step.  Both were true here.  I forced myself to look in the distance.  I figured if I tripped and fell, the pain would be less than that stupid cramp.  It went away.


I took the bus back to my car and drove home. I'm in the sub-corral!!! 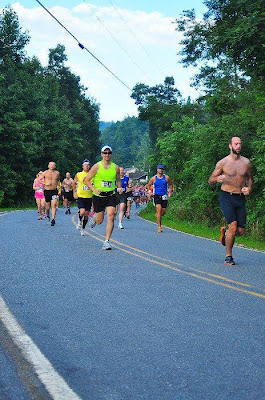 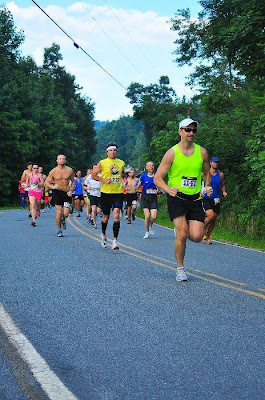 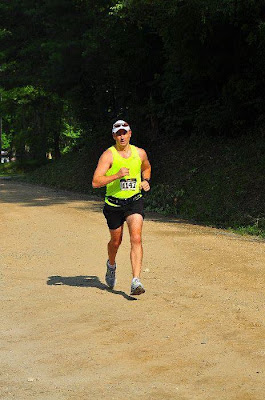 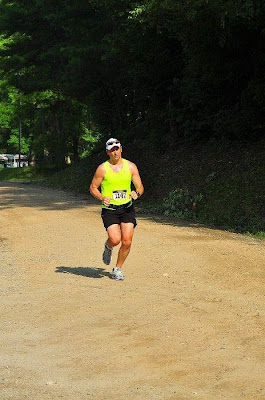 Posted by Lillywhite Family at 6:42 AM 2 comments: 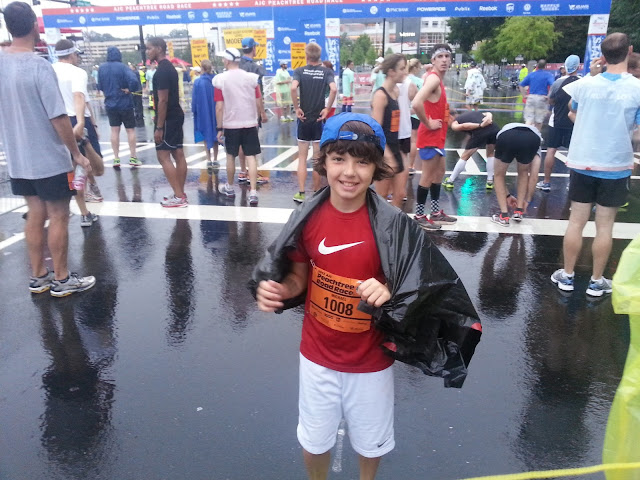 We did everything different for this race.  For starters, only Michael and I were traveling to Atlanta.  To save money, the rest of the family stayed home while Michael and I boarded the Greyhound for the 4 hour drive to Atlanta. We left on July 3rd, and came back July 4th, after the race.

I had never been on a long distance bus before and wanted the experience.  It went really well, no issues at all on the way down there.

It was really nice being able to play games with Michael, sleep for a bit, and just relax.  The ticket was $90 total, round-trip.  That works out to $22.50 each, each way.  We would have spent more than that in gas if we had driven.  Plus, it was an express bus, which meant we had more leg room, power outlets, and never stopped.

We arrived a little later than scheduled, because the traffic was even worse than normal in Atlanta.  We hopped on the MARTA train that is adjacent to the Greyhound terminal.  We got off in the Buckhead area of Atlanta.  It was about a mile walk to the apartment we were staying at.  It was raining, and I was worried about my laptop on my back, so we walked pretty fast.

That was the other thing we were doing differently this time.  I had reserved a room on airbnb.com. It is a pretty cool website connecting travelers with people renting out rooms/apartments/houses/etc. I wanted a room within walking distance of the start of the race, which is a pretty expensive part of town. Hotel rooms in that area are at least $150.  I found this room for $50.  It is just a room in an apartment that this guy lives in, but rents out his room to make some money.  So we had to share his kitchen and bathroom, but it worked out really well, and was within walking distance to the start.

After we "checked in", we walked to eat some dinner. We were doing everything without a car, but we found a nice New York style pizza place and had a great meal.  I forgot to take any pictures there.

After dinner we walked back to the apartment and didn't know what we were going to do the rest of the night.  I found a "dine-in" theater in the Buckhead area, so we walked to it and watched "Now You See Me". 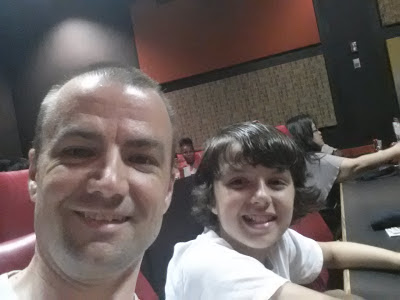 We had some cheesecake and popcorn, and enjoyed a great movie. We walked back to the apartment and got our stuff ready for an early morning.

We woke up on race morning, got ready and walked to the start.  Michael had qualified for the sub-corral, I was in the A corral, which meant he would start, then I would have to wait about 15 seconds.


It rained non-stop the entire time we were in Atlanta, except for the actual race.  It rained right up until we started, stopped while we were running, then started after we had finished.  I wish it would have been the exact opposite, the rain would have been nice for the run, but put a damper on things before and after.

We each had a goal, not to PR, but to beat our Peachtree records.  By doing that, we'd each have finished three Peachtrees, each faster than the previous year.  That put our goal time at 44:44, which was one second faster than Michael's finish in 2012.

I never saw Michael after the start, so I didn't know how he was doing, but I was right on pace all the way through, and felt like I couldn't have gone any faster.  It was hot, humid, and the road was wet and slippery from the rain. 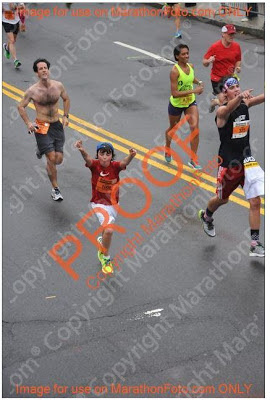 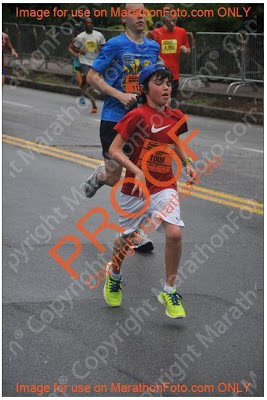 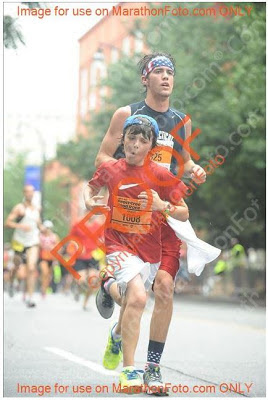 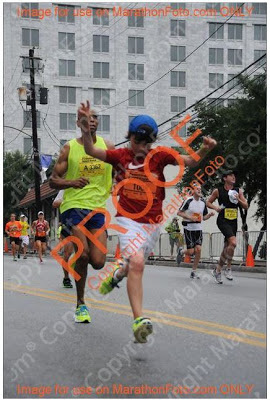 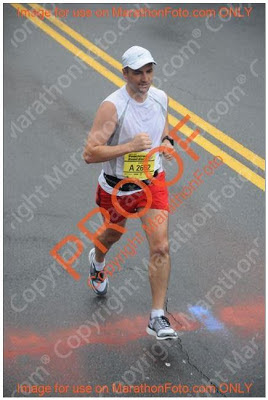 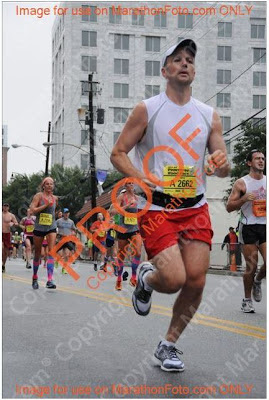 When I crossed the finish line at 44:27, I was pretty happy with my time.  I saw Michael waiting for me just after the finish line.  I was happy to see that he was OK and had beaten his time by even more than I did.  He finished in 43:49.

After we had finished, I found out that he had run with someone, similar to how he did in 2011. Charles ran with Michael for the first half, then turned him loose because he could no longer keep up.  Michael later told me he didn't think he could have run as fast as he did without Charles.  It's pretty amazing this same thing happened again.  In 2012 I was able to run with Michael, but the other two years he was in a different corral and somehow ended up with a stranger really helping him. 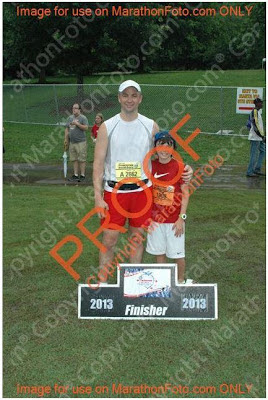 After the race we took MARTA back up to the stop by our apartment, got showered, then had breakfast at a nice Cafe. 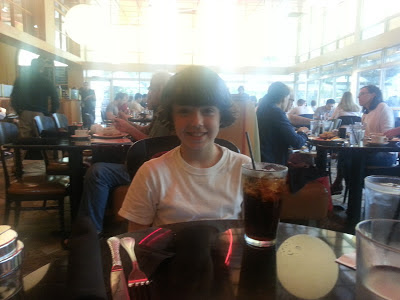 Then we took MARTA back down to the Greyhound station and came back home.  It was a really fun trip, we already are looking forward to 2014.

Yes, he's beat me every year!

Posted by Lillywhite Family at 10:45 AM No comments: