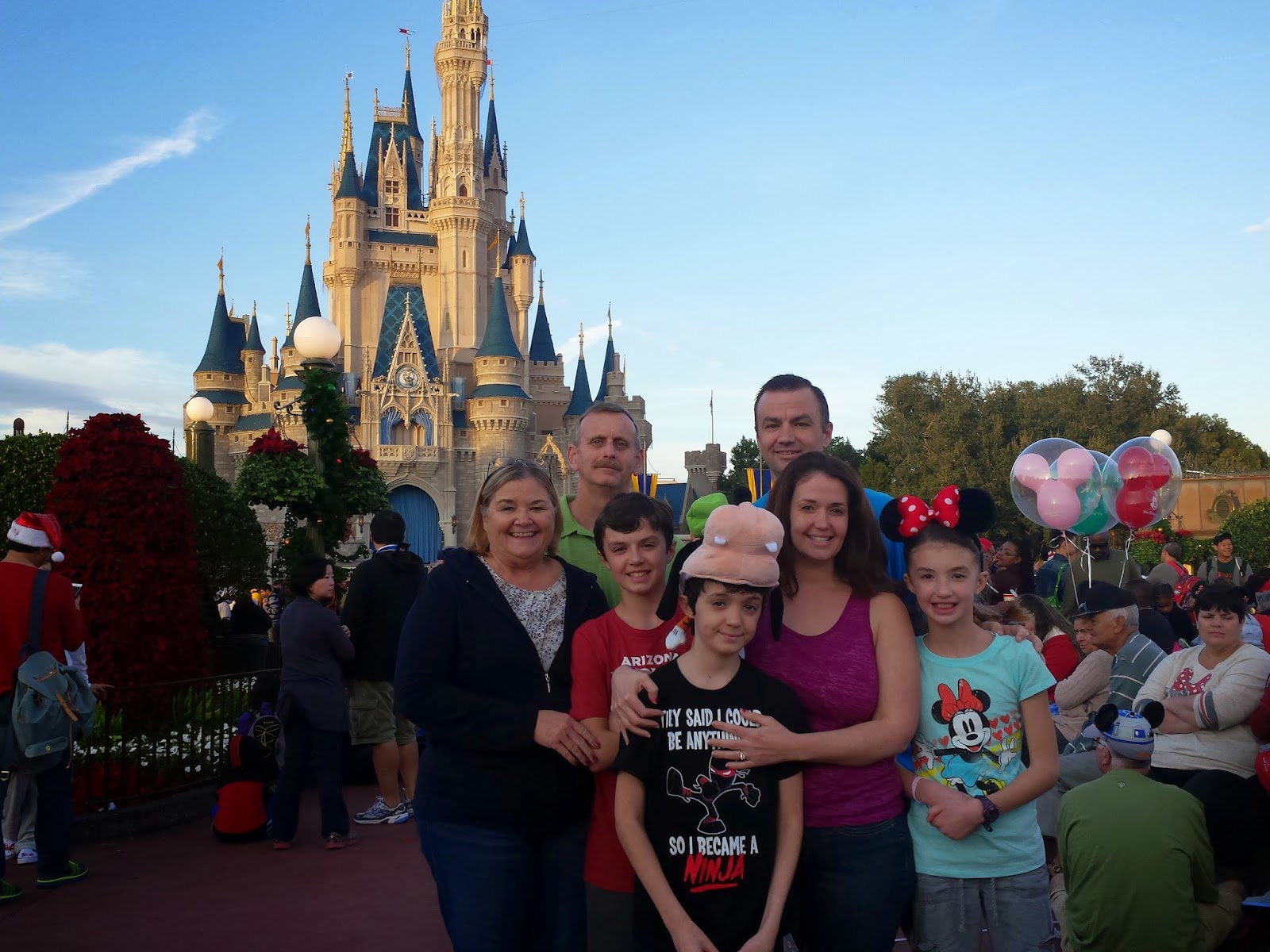 Wednesday, December 24th:
My mom and step-dad, who always go above and beyond in supporting me during my marathons, came to our house the night before.  We had told the kids that it was for Christmas.  The kids couldn't wait to spend Christmas with Grandma and Gramps.  We had kept this entire trip to Disney World as a surprise.

For months I had schemed of ways that we were going to do the "reveal".  I came up with a plan of writing a code that they had to decipher.  In their Christmas Eve gifts (we always let them open one gift on Christmas Eve, and it has always been pajamas), we would put a encrypted message and a key.  One of the kids got half the message, another got the other half, and the other got the key.  We wrapped it to make it look like pajamas, because every year the kids will ask "When do you get to open our pajamas?" Every year we answer with something like "You never know what you'll open."

I did it that way so they would each have something to open, and so it would last and not be over immediately.  The encrypted message said:

(I wanted every letter in the alphabet included).

We told them we were going to open the Christmas Eve presents in the morning this year.  They opened them, and my plan worked better than expected (too good).  They did a great job deciphering it, but it took a LONG time.

The kids were excited.  Kyle was sad at first because he didn't like messing with the order of when presents were going to be opened.  He got over it, though, and was excited. The kids hadn't even noticed that earlier that morning I took Graycie to Camp Bow Wow, where she would stay until Monday.

So now that the kids were in on the surprise, we had Christmas a day early and opened all the presents. We showered, packed up the car, and were headed to Orlando!

We stopped just inside South Carolina and had lunch at Wendy's.  We got back on the road and had dinner at a Denny's somewhere in Florida.  We arrived at our hotel (a Holiday Inn Express) outside of Orlando, very late at night.

Thursday, December 25th:
Christmas morning we got up, had breakfast at the hotel and headed to Disney World.  We got there early, which was great because we got on Space Mountain with no wait at all.  That would be the last of that.  It was CRAZY crowded, the lines were very long, but we had a blast.  We had lunch and dinner at the park, and headed home just as the fireworks were starting around midnight.  It was a very long day on my feet, not something I would normally do so close to a marathon, but Disney World was the focus of this trip. 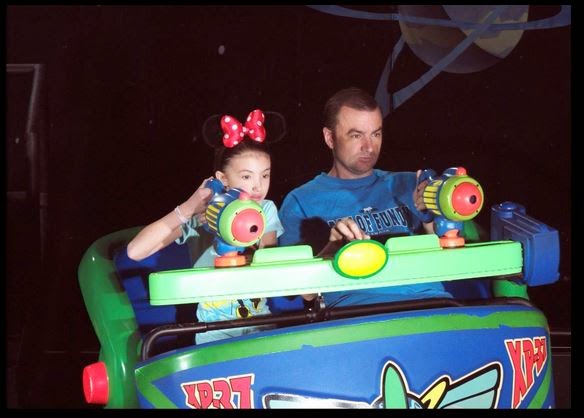 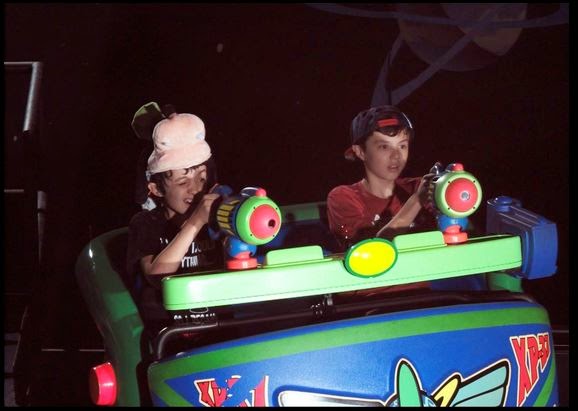 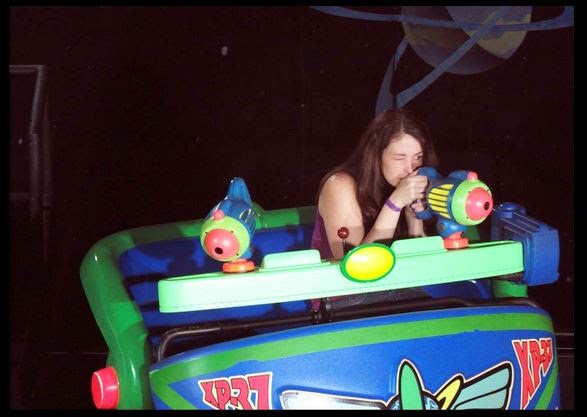 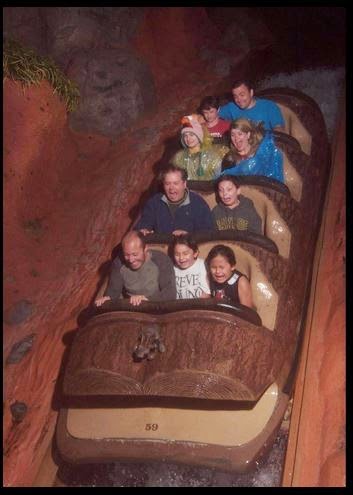 Friday, December 26th:
We had breakfast at the hotel again, then started our drive up to Jacksonville, where we'd spend the next two days before the marathon on Sunday.

We had all been looking forward to seeing the movie "Unbroken" for over a year.  It was released on Christmas day, but we were in Disney World all day.  So I planned a stop in Daytona Beach, which was approximately halfway between our hotel near Orlando and Jacksonville. 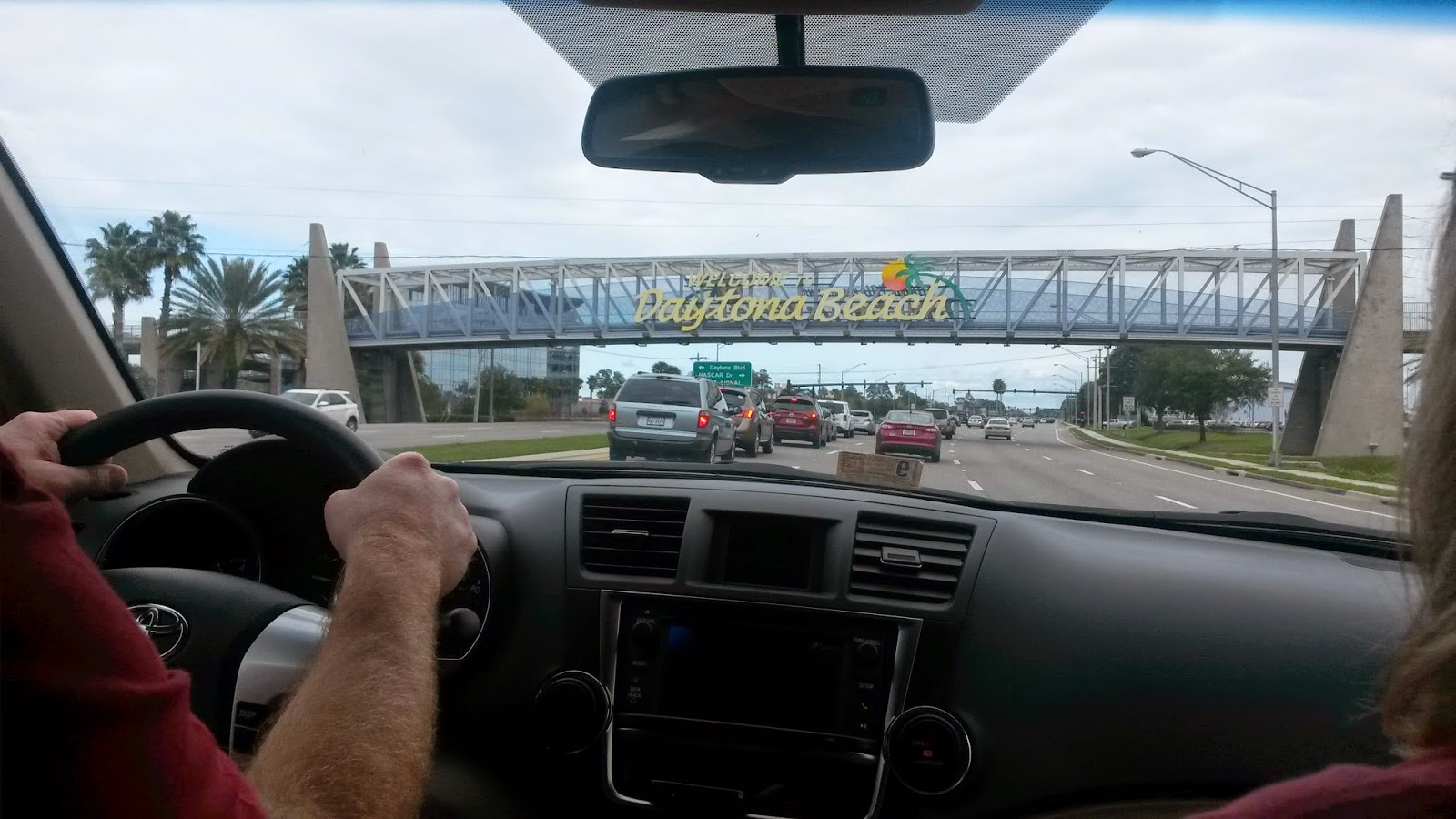 Alicia doesn't enjoy intense movies, so Malissa volunteered to do some sightseeing with her while the rest of us watched the movie.  I had been so looking forward to this movie for so long, I couldn't wait.  We arrived at the parking garage nearest the movie theater, and Malissa really had to use the bathroom.  So we dropped her and Alicia off close to the entrance, while the rest of us parked.

While parking, in the parking garage there was a dead end without room to turn around, so Torre started backing up.  Just then another car backed out of a parking spot and we got into a fender-bender.  It was a major bummer, because we were in Grandma and Gramps' really nice, new, Toyota Highlander.

Torre told me to go ahead and take the boys to the movie while he and my mom dealt with the other driver and the police.  I was hoping they could get it resolved in time for the movie, because I so wanted to see it with them.  But the movie started, then ended, without them.

Just as we left the theater, we saw them come in.  Everyone tried to forget it and not let it put a damper on the rest of the weekend, but it was a major bummer.

While Michael, Kyle, and I watched the movie, and Grandma & Gramps dealt with the police, Malissa and Alicia had gone to The Bubba Gump Shrimp Co. for lunch, then to ice cream for dessert.  After we all met back up, we decided to eat lunch back at Bubba Gump's.  Malissa and Alicia would just chat with us while we all ate.  It was so good, I love that place.


After our adventures in Daytona Beach, we drove the rest of the way to our hotel in Jacksonville.  We ordered Papa John's Pizza and had it delivered to our room.

Saturday, December 27th:
We got up and had yet another good Holiday Inn Express breakfast, this time in Jacksonville.  We headed to the packet pickup at a local running store.  I saw the area to pickup my bib and was shocked to hear the voice of Hal Higdon.  I looked up and sure enough, it was him.  When I decided to run my first marathon back in 2011, it was Hal Higdon's book, "Marathon: The Ultimate Training Guide" that was my running bible.  I've watched a ton of his videos, and also enjoyed his novel: "Marathon".

He was nice enough to pose for a picture with me, and it is on my wall in my office.


After the packet pickup, Grandma and Gramps treated us to a fun round of Miniature Golf. Gramps squeaked out a victory. 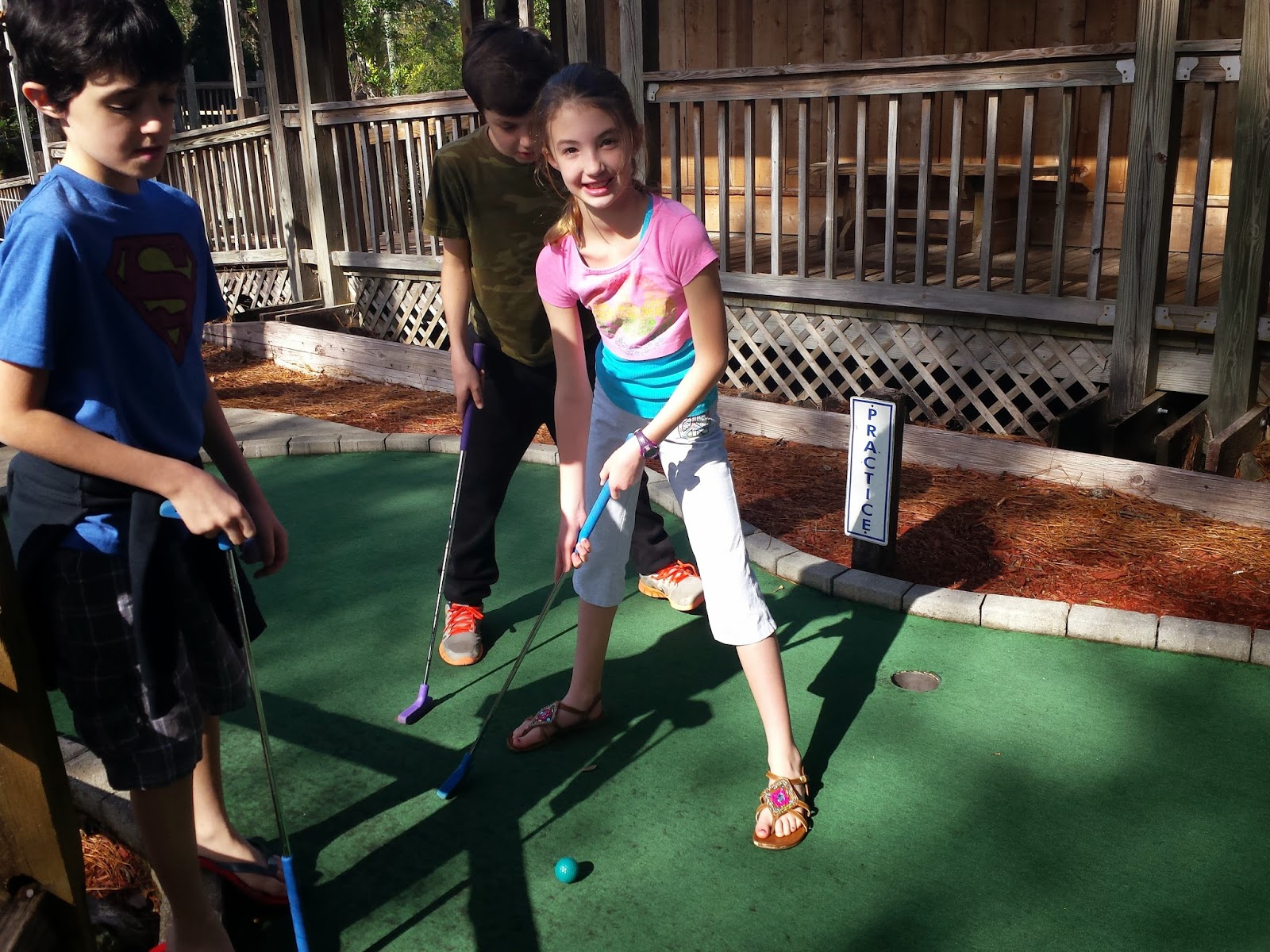 After golf, we all decided on Chili's for lunch.  We drove to the nearest Chili's and there was a sign on the door saying they were closed due to a malfunctioning water heater.  We had already got our hopes up for Chili's, so we found the next closest one and drove to it.

For dinner, I found a nice little Italian restaurant called Gubbio's.  It was really good.

Sunday, December 28th:
We got up and drove over to the marathon, which was just a few miles from our hotel.  We parked on a side street and made our way to the start.


We had a plan where everyone would see me at multiple points throughout the race, which is always nice.  The race starts, goes 1.5 miles then loops back and crosses the start at the 3-mile point in the race.  That was kind of weird, but enabled everyone to just hang out and see me again in 25 minutes or so.

This course is pancake flat throughout, which was nice.  The weather was pretty warm, though. 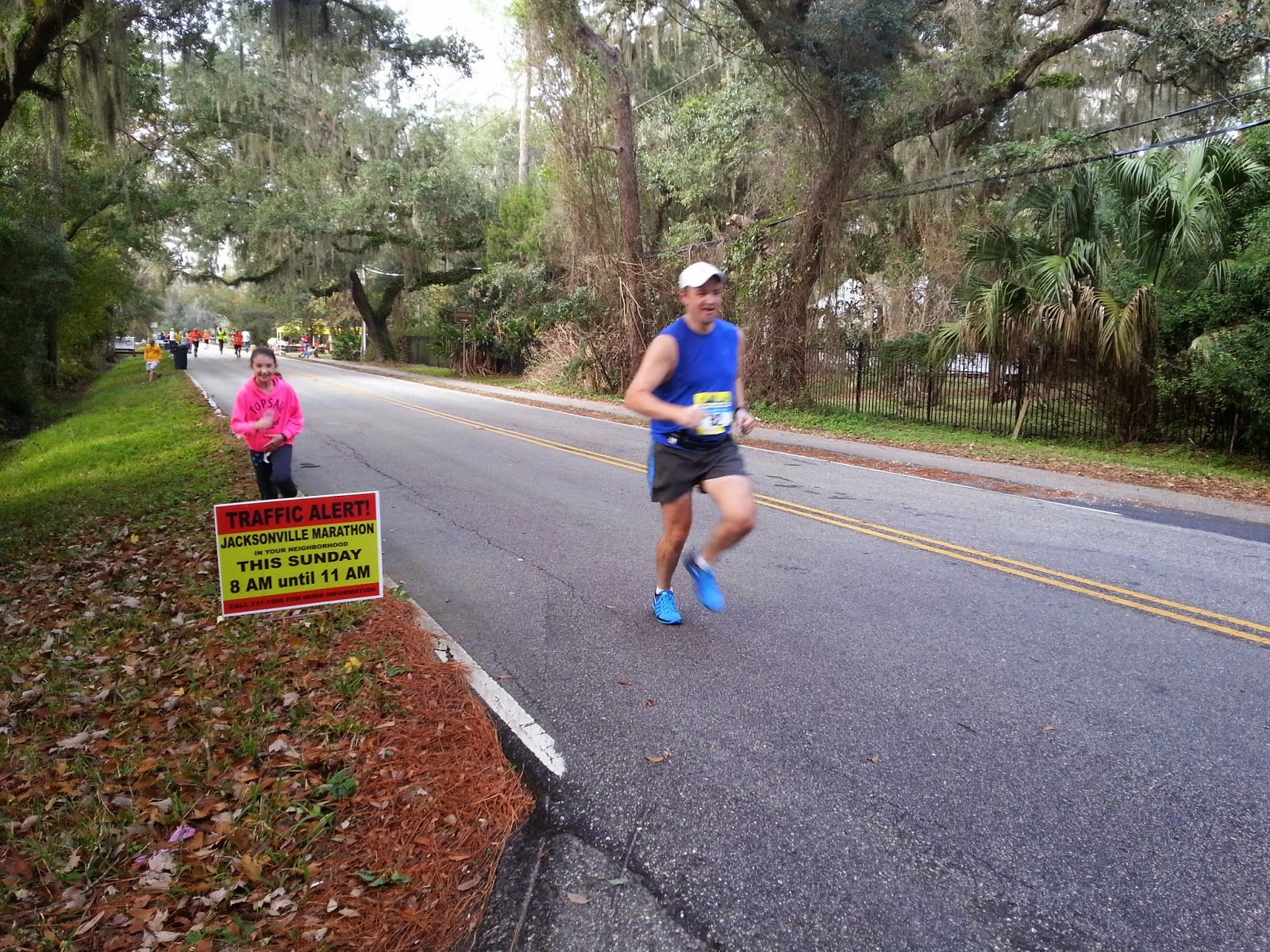 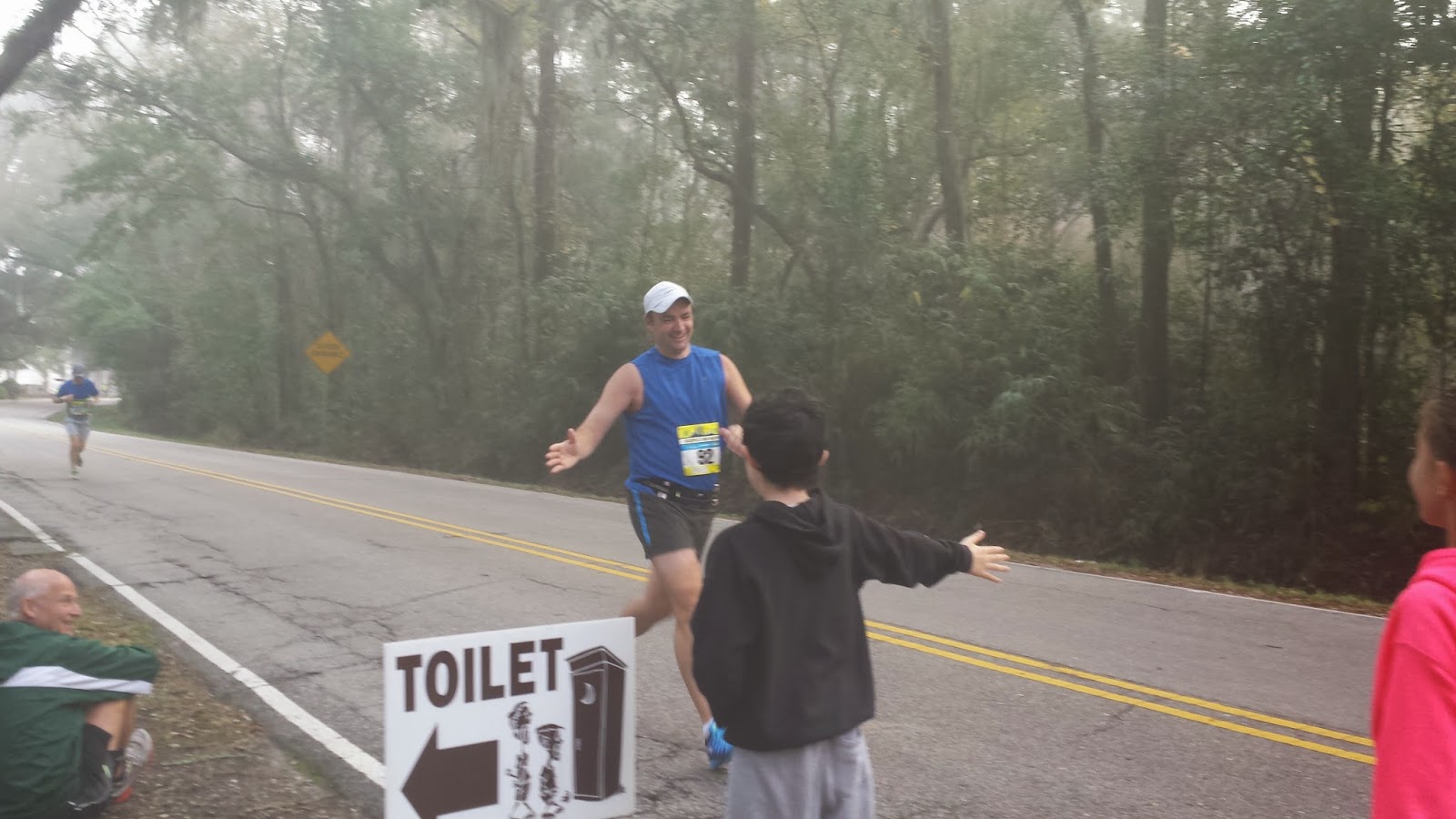 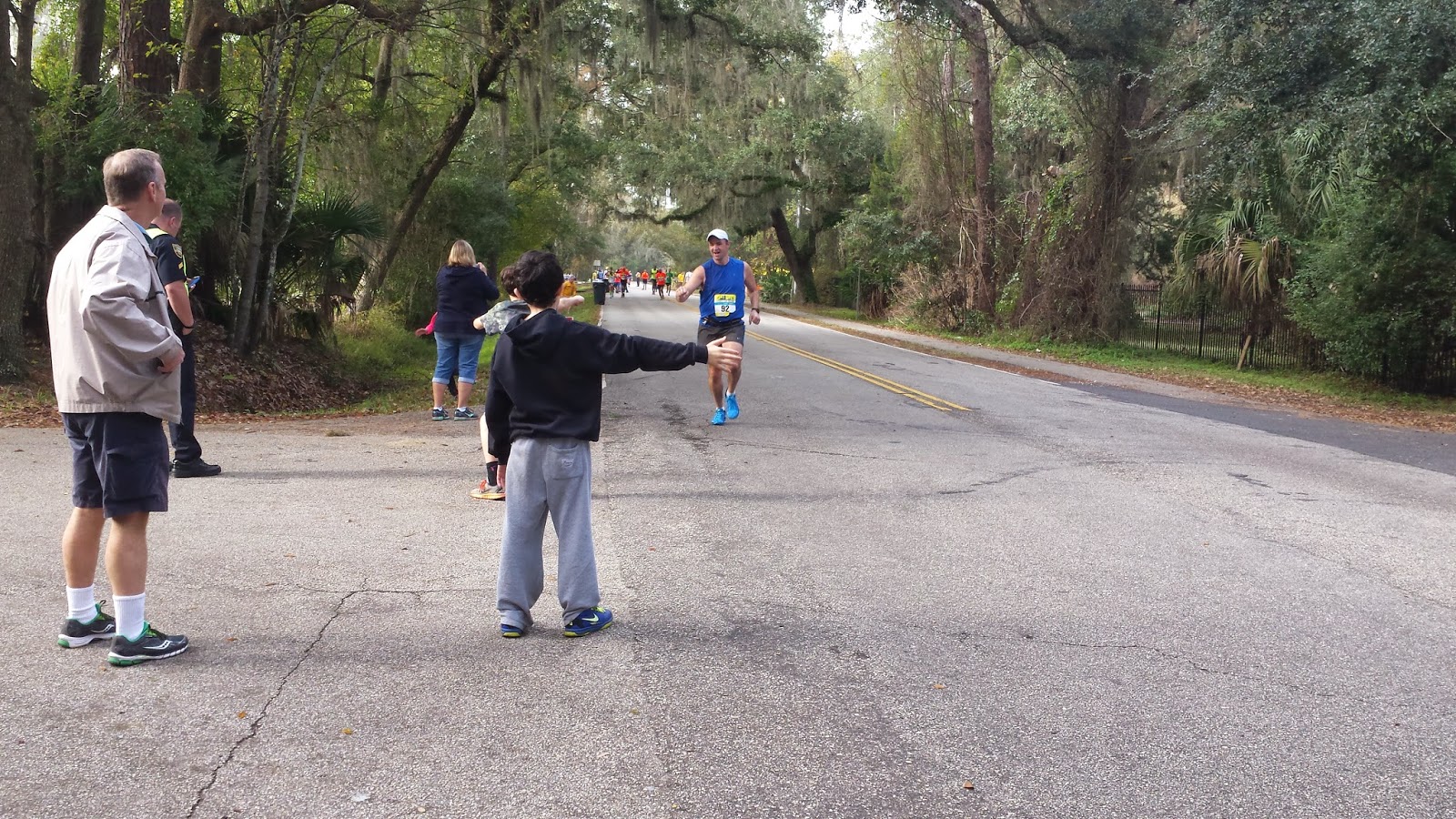 After 21 miles or so, my pre-race site seeing really started to have an effect on my body.  I was hurting.  The only reason I was running Florida again was the fact that I crashed last time in Miami, and finished over 4 hours.  I'm in the 50sub4 club, which means I need a marathon in each state with a finishing time under 4 hours.  So that was my goal in Jacksonville.  Every mile I did the math and had plenty of cushion, but that cushion was getting smaller and smaller. I finished in 3:54, mission complete!  I enjoyed the race, but was glad I didn't have to do Florida a third time. 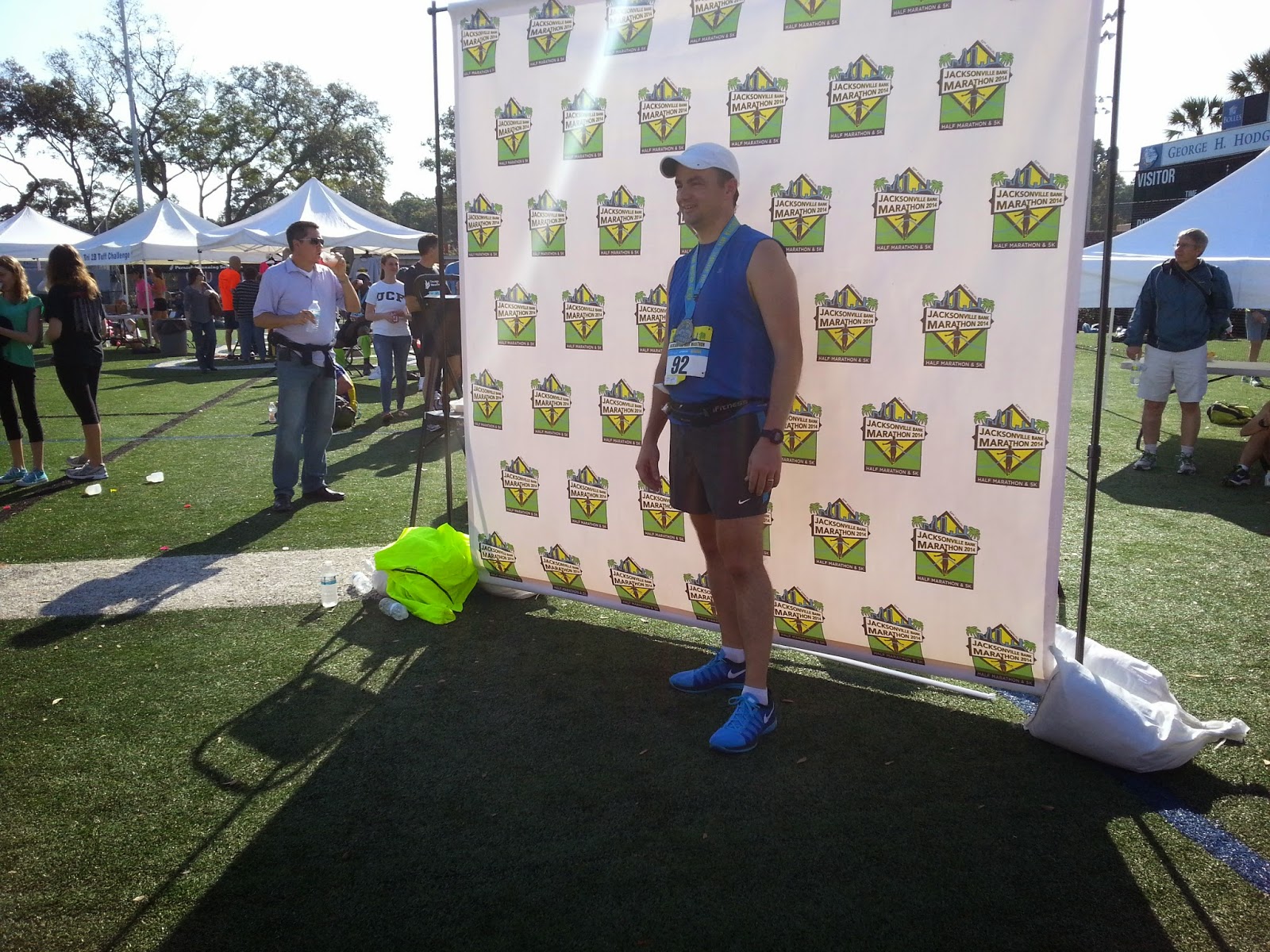 We made a quick stop at the hotel, where I showered, and we packed up to leave.  We stopped at a Five Guys, for my favorite post-marathon meal, then drove home to Charlotte, where we had dinner at Chipotle.

Posted by Lillywhite Family at 10:00 AM No comments: 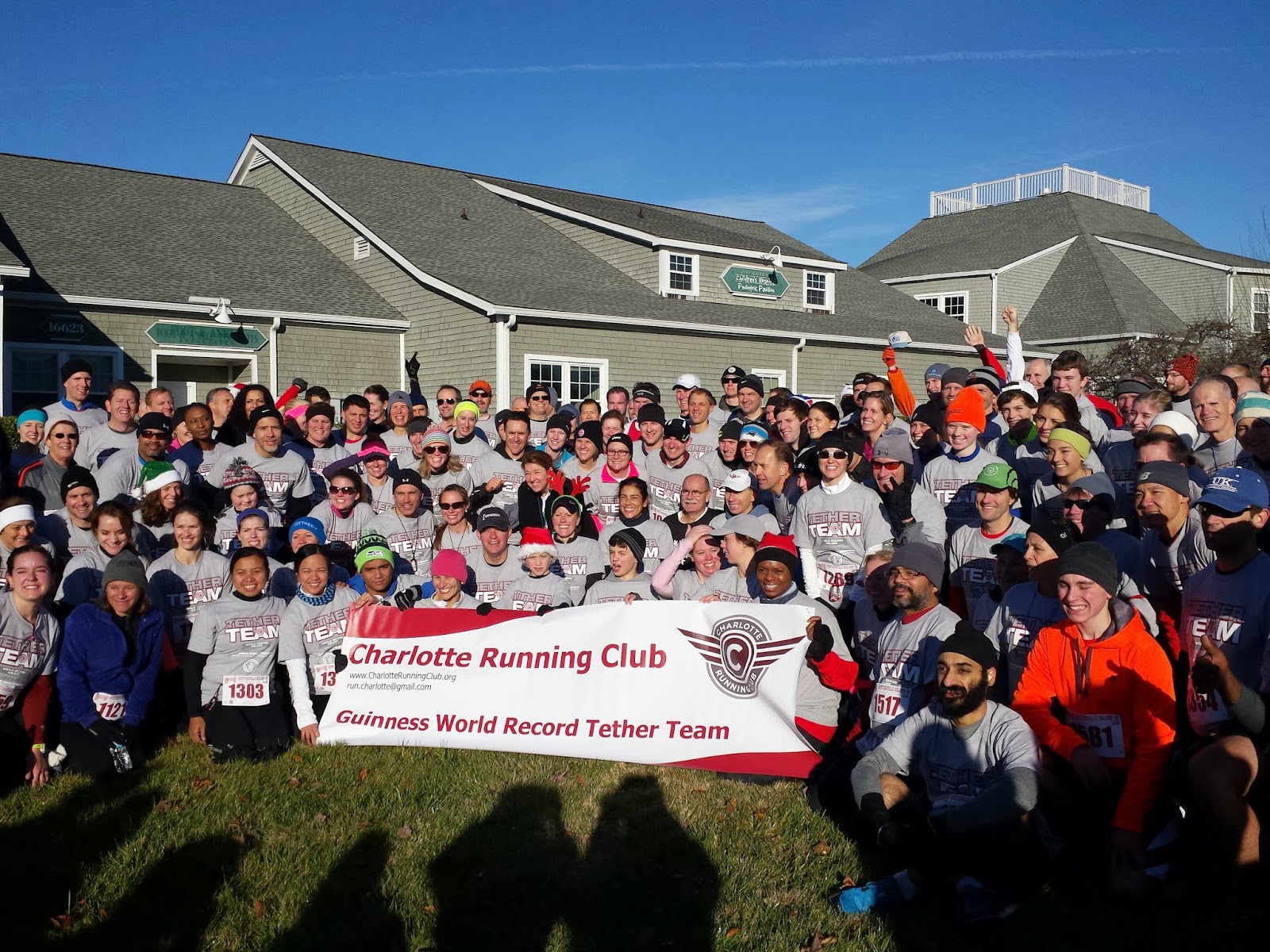 Several months ago I saw a Facebook post from the Charlotte Running Club advertising the fact that they were organizing an attempt to break the Guinness World Record for "Most runners linked to complete a 5 km race".  I thought that sounded cool so I signed up.

We had a practice run where we got together and tested the theory of how it was going to work.  There was a lot of planning that went into this and they did a really good job at communicating via their Facebook page how everything was going to work. 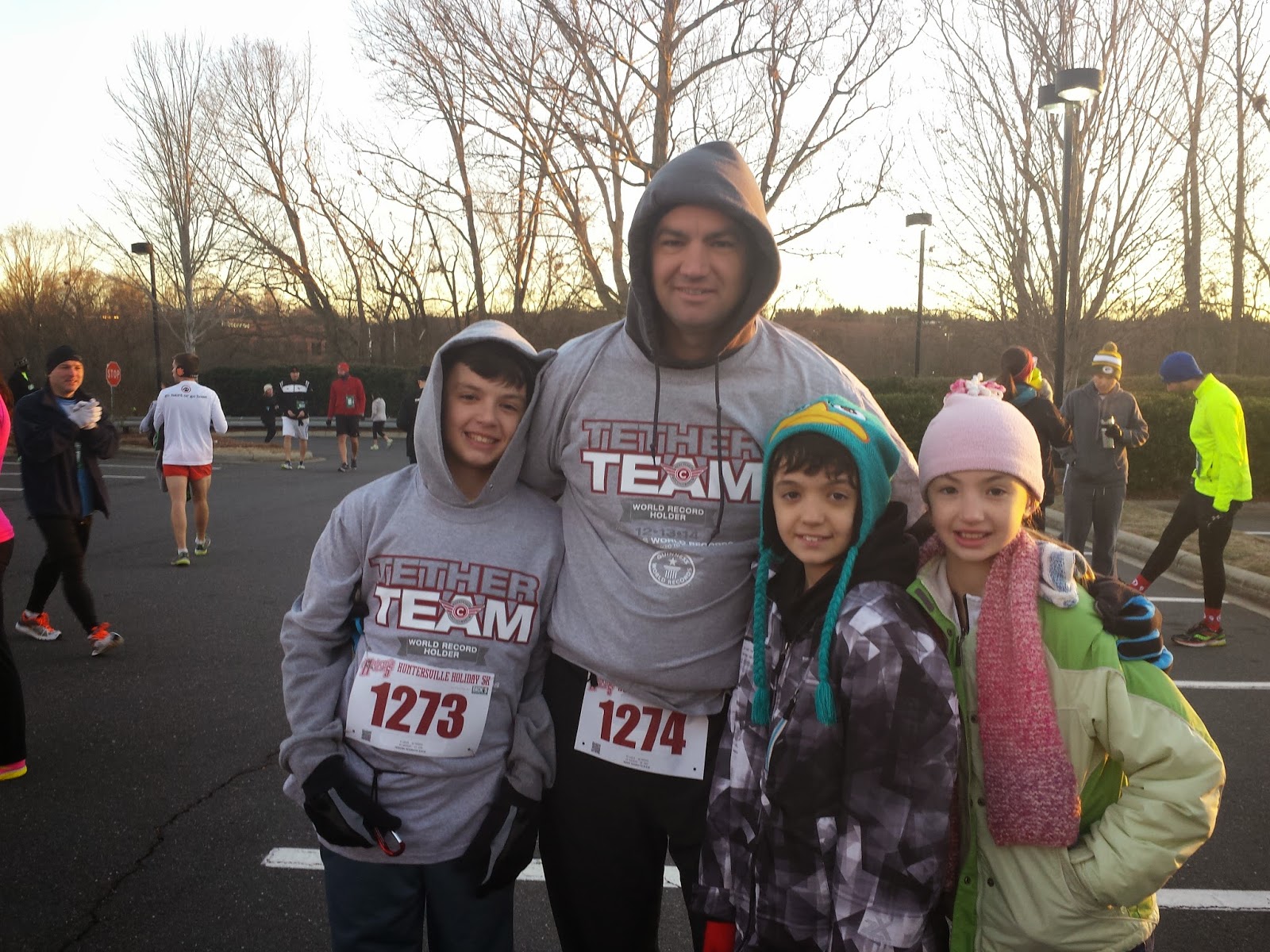 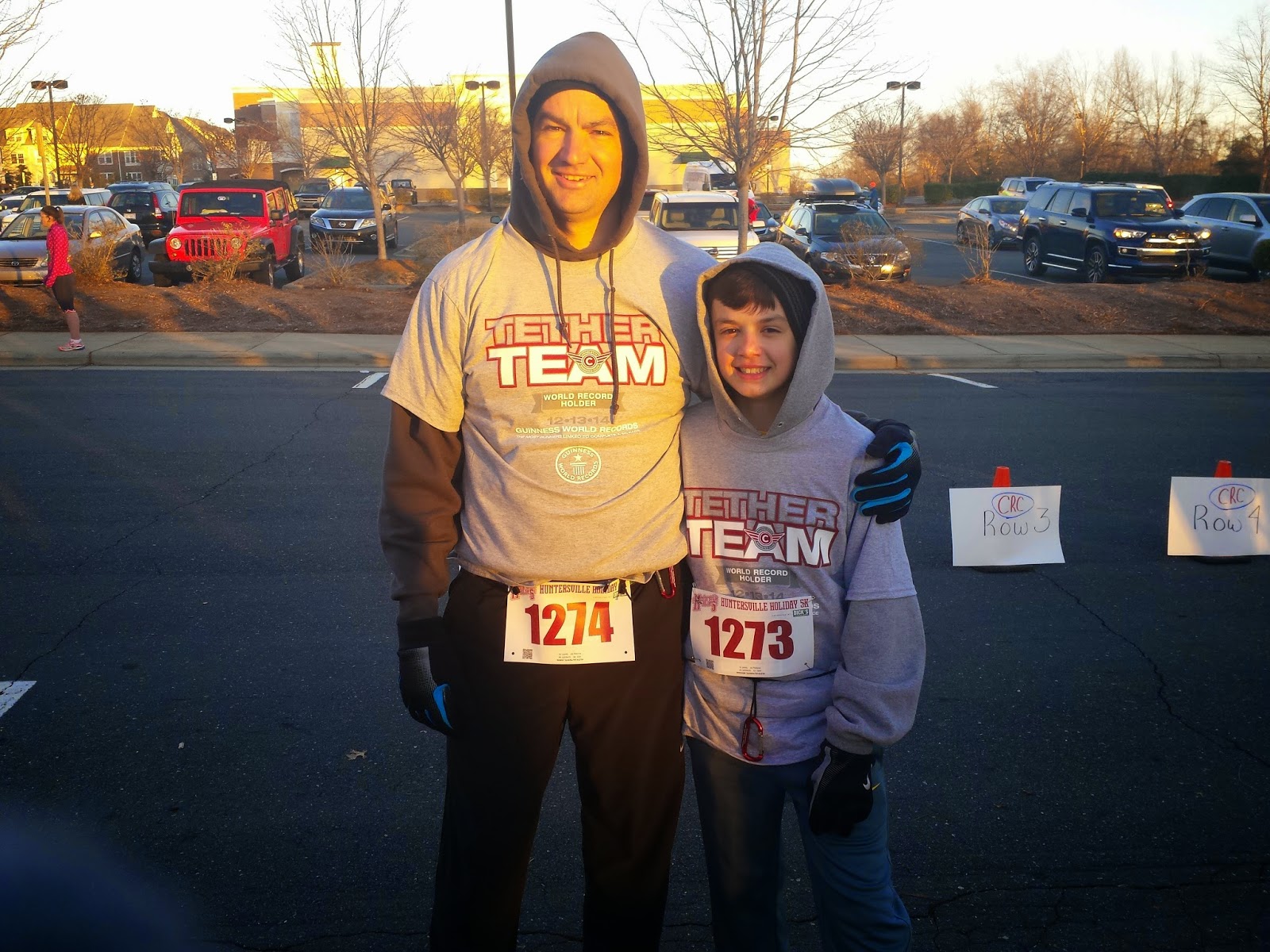 We got lined up in our assigned spots, and they tied everyone together.  It was small bungee cord, attaching 10 runners together.  Then each row of 10 horizontal runners was attached to one long vertical cord.  Each line had a line captain with a whistle that would blow it if anyone in their line needed to stop or walk. 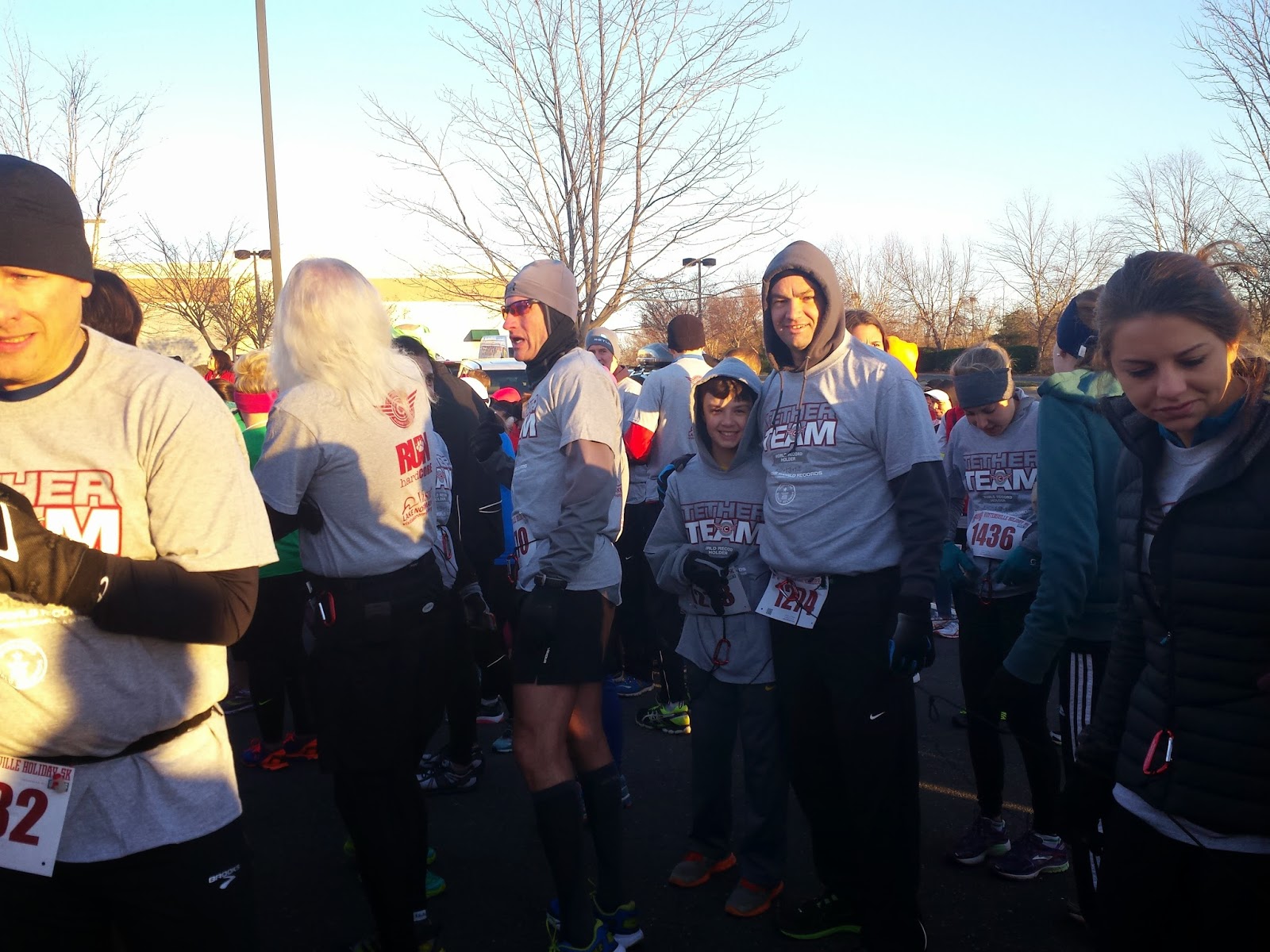 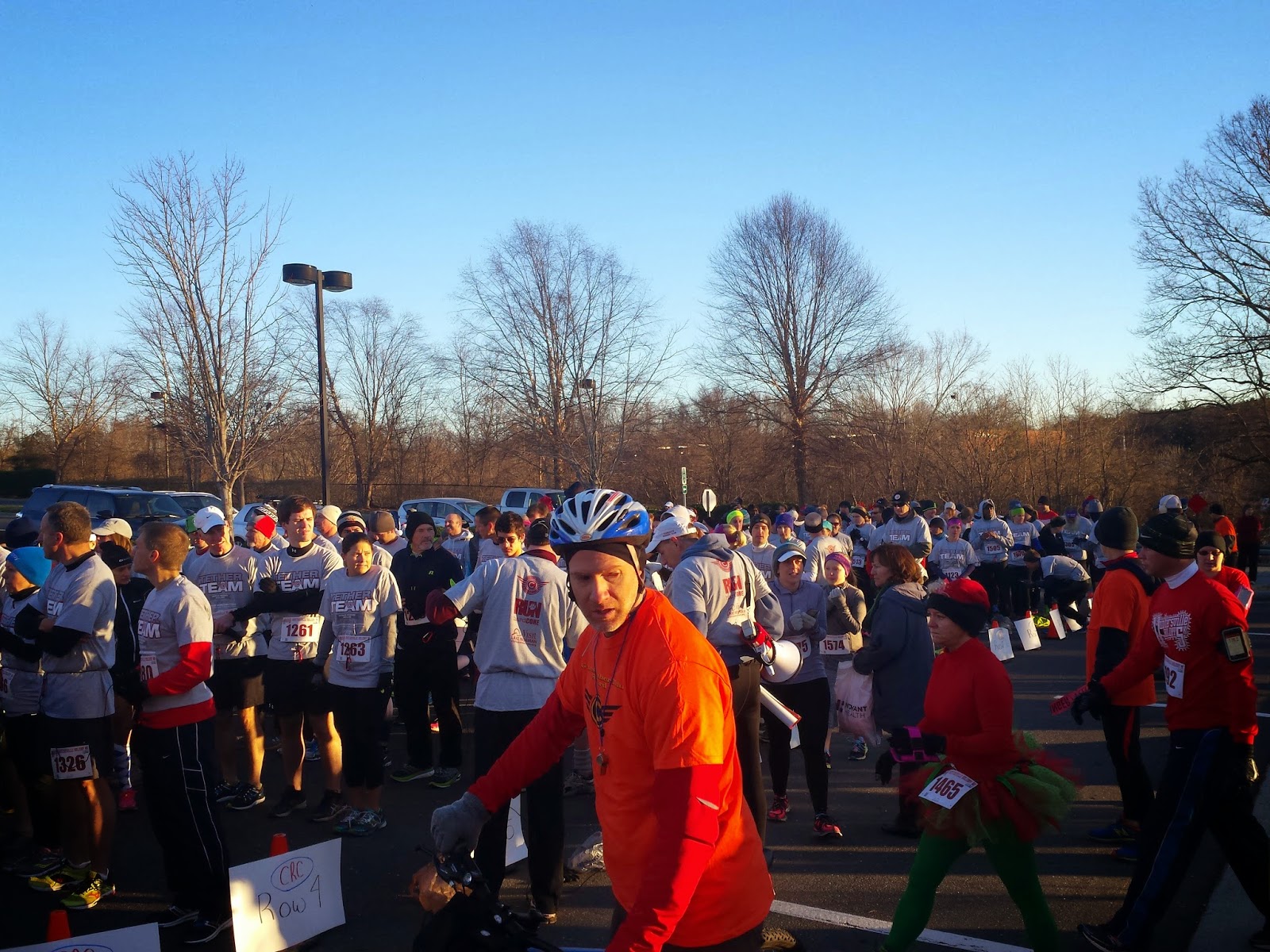 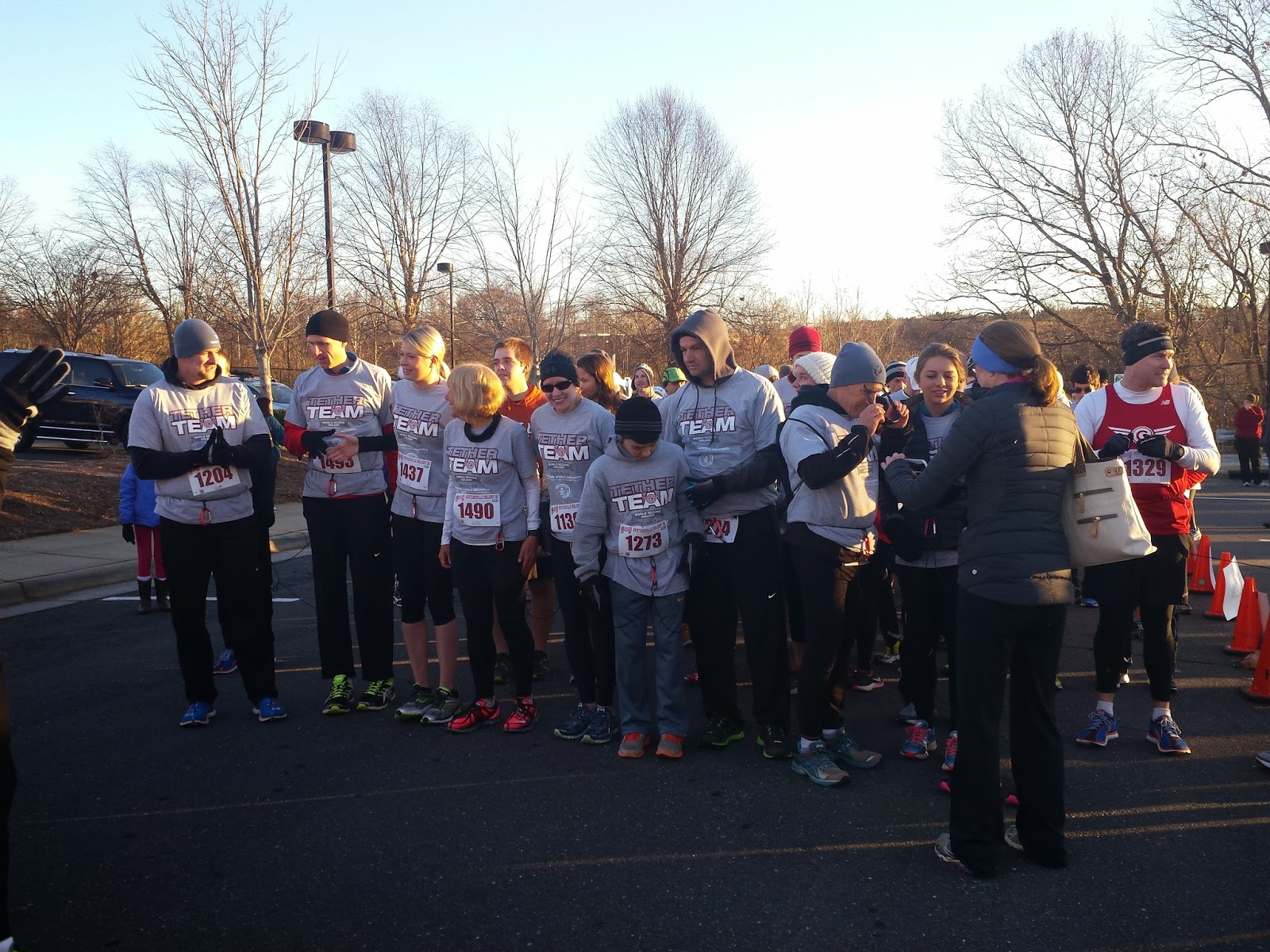 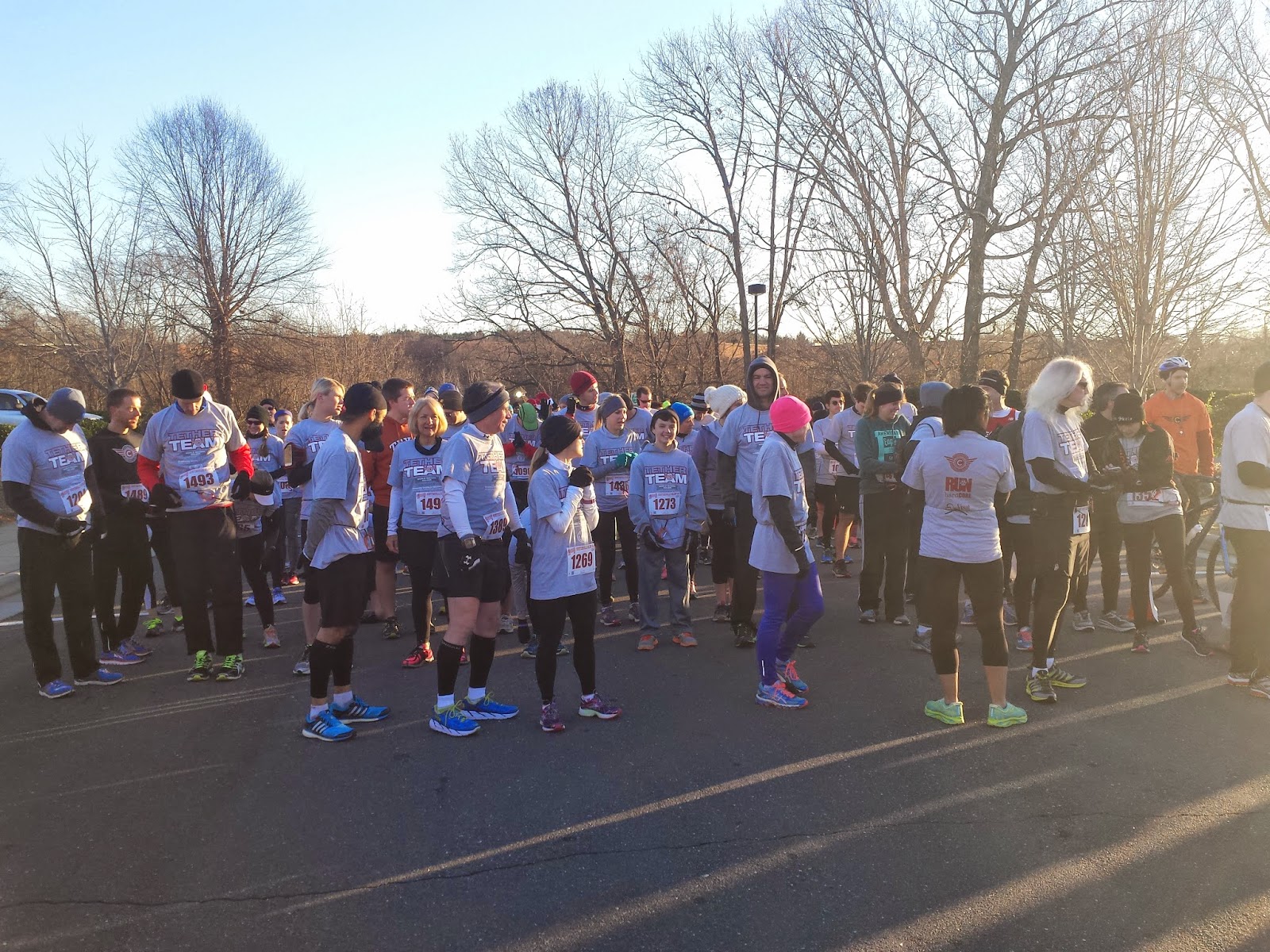 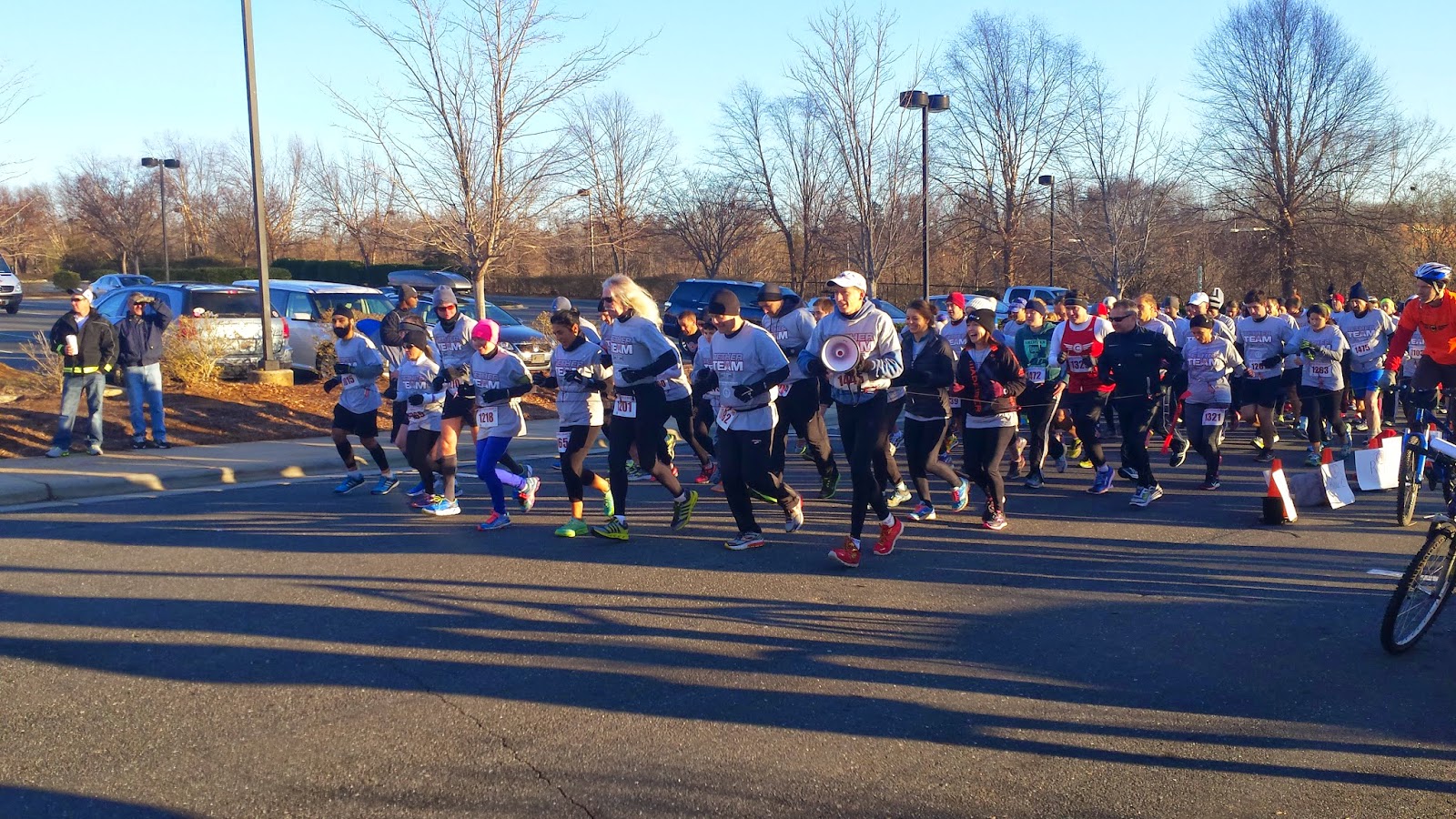 The race finally started and we were off.  There was no rule as to how fast we completed the race, just that we stayed tethered together.  So we jogged at a very slow pace, and inevitably someone had to walk, so it was painfully slow. 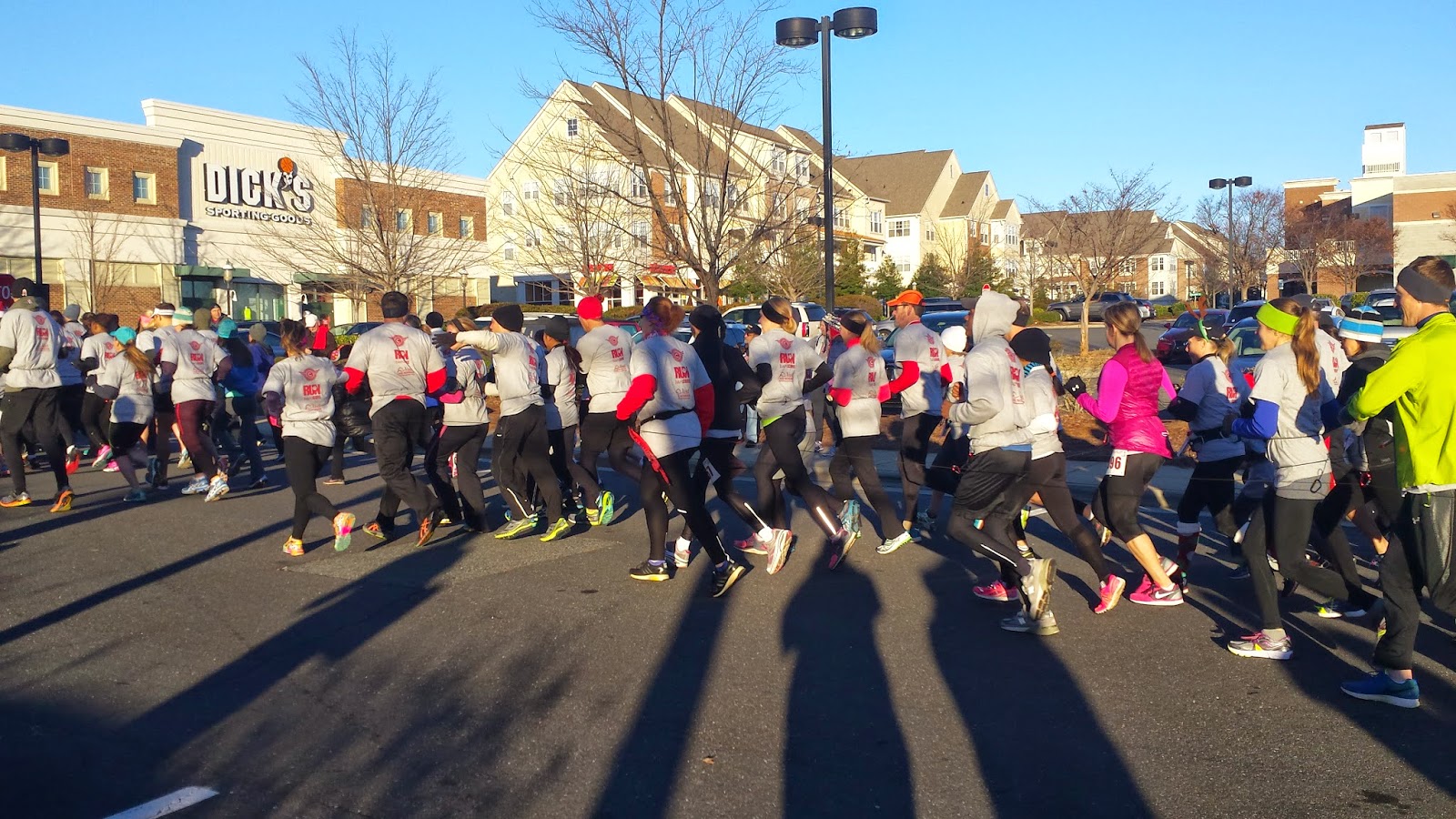 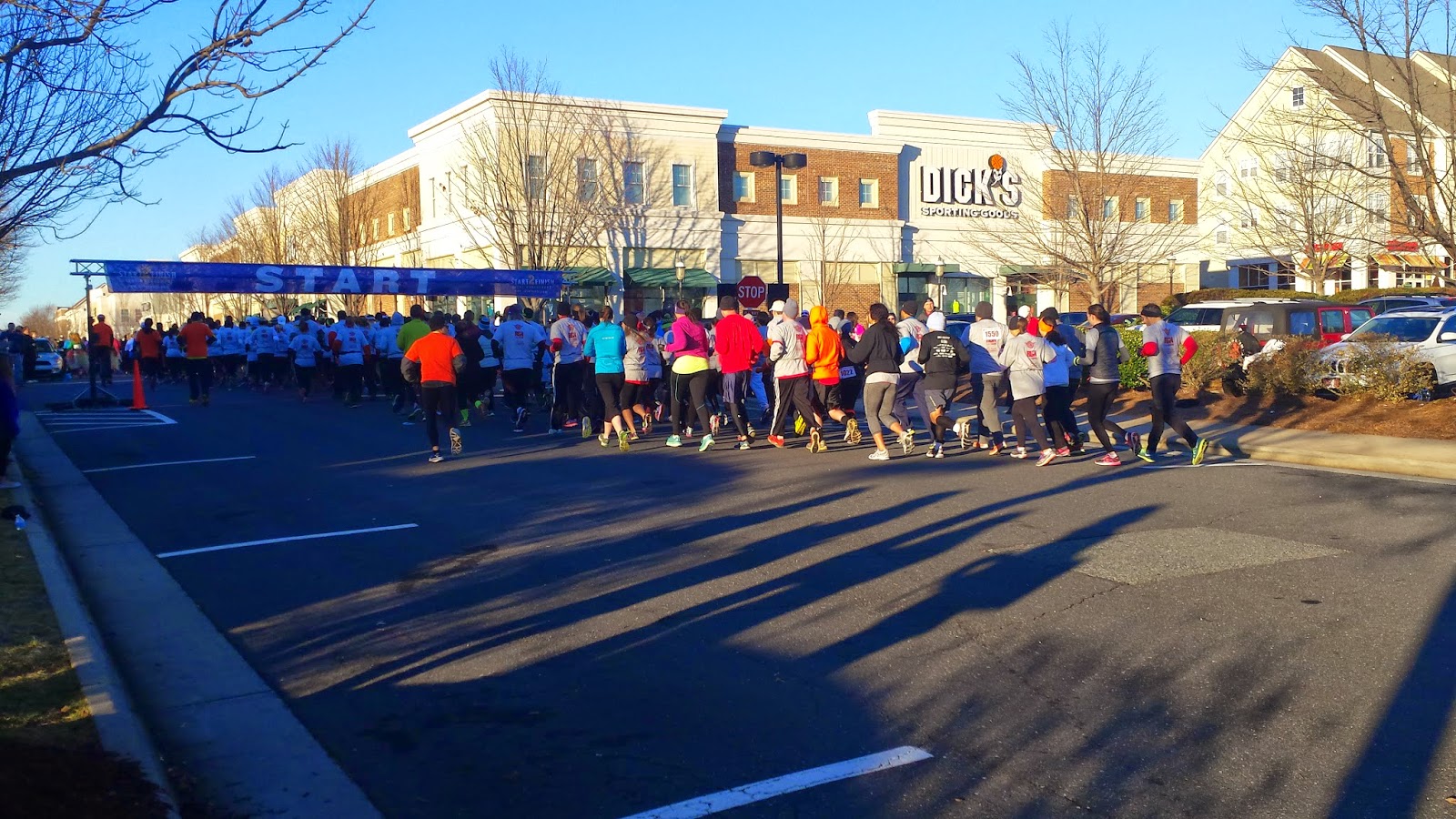 We finished in just over 43 minutes, and had a great time. I still haven't got an official word as to how many runners we had connected, but the leader did say we broke the world record.  Here is the link to the world record, which as of this writing still shows the old record, it should be updated soon.

"Most runners linked to complete a 5 km race" 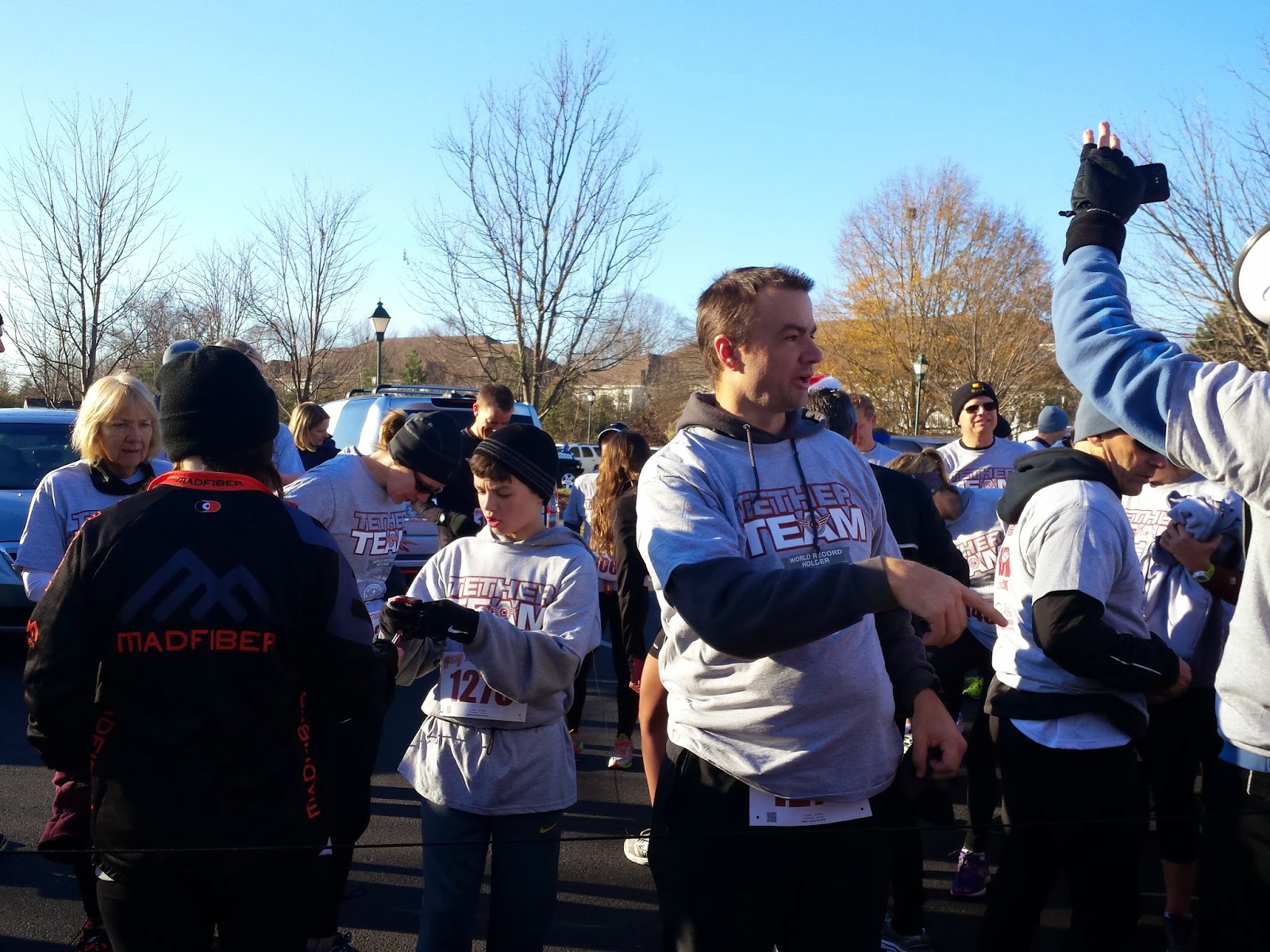 Posted by Lillywhite Family at 11:00 AM No comments: