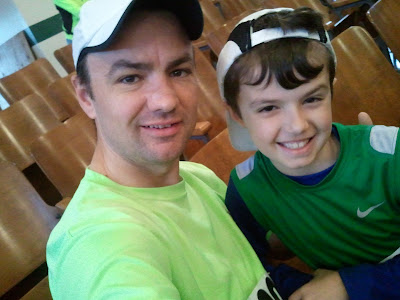 Last week, when I saw my new marathon training plan called for a 10k race this weekend, I searched for a 10k near Charlotte.  The only one I found was in Asheville, about 2 1/2 hours away.  We have been doing a lot of travelling lately but I really wanted to stick to my plan.  Malissa and I came up with what I think is a great idea.  We will take turns taking one of our three kids, with one parent, for some quality one on one time.  So I took Michael with me to Asheville to run in this 10k.

The spaghetti dinner on Friday was at 5:30 PM, so I picked Michael up early from school (score for him) so we could make it in time.  We had a really fun drive up to Asheville and checked in to the hotel at around 4:30 PM.  We watched TV in the hotel for a little while, then headed over to the spaghetti dinner.  It was a fundraiser for the PTA of the elementary school (as was the race) so it was a single serving and wasn't nearly enough food (but was delicious.) So we headed to a grocery store and bought some bagels, chips, and granola bars for hotel snacks.

We watched some more TV in the hotel room, set the alarm for 6 AM, and went to bed around 9 PM.  When we awoke, we headed downstairs for a very nice Holiday Inn Express breakfast, then back upstairs to get ready for the race and check out of the hotel.

It was a little chilly and threatening rain so we waited inside the school's auditorium until a few minutes before the race.


When we stepped outside we saw that the rain had picked up a lot, but wasn't too cold (around 45 degrees.)  We ran some quick strides and were ready to go.

Mile 1: The race starts off with an immediate down hill that is pretty substantial.  This was one race where I didn't mind starting off way faster than what I could manage for the entire race.  We did the first half mile at a 6:05 pace, yikes!  Just before the 1st mile marker, Michael told me he was going to let me go ahead.  We had talked that I really wanted to race this one, instead of run with him, so this was expected.


Miles 2-6: Nothing very eventful happened, except for the rain picking up quite a bit.  We were soaked and dodging big deep puddles the whole way.  I was trying to maintain a 6:55 pace, which is much faster than anything I had ever done before, but it had been a long time since I raced.  Even in my marathon I was never racing, just wanted to enjoy the experience.  I maintained the 6:55 pace all the way, and enjoyed the race a lot.

After I finished I immediately walked back down the hill so I could get the earliest possible sighting of Michael.  He was only 3 minutes behind me and also enjoyed the race very much.

We waited inside for the award ceremony, hoping Michael had won his division.  We were thrilled when they called out his name for 1st place (see video below). To be honest, I was hoping I would place also, but didn't think it was possible.  I'm not disappointed, 6th out of 54 is better than I expected.

We enjoyed talking about the race for the 2 1/2 hour drive home and created a ton of great memories.  Unfortunately I am horrible at taking pictures (Malissa is our family photographer) so I only have these few to post, but will try harder if we ever when we do this again. 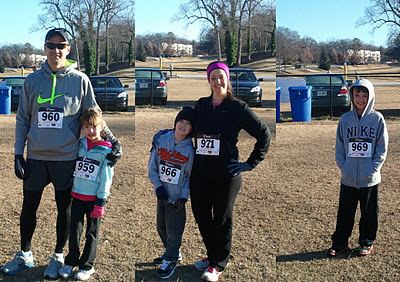 We decided to run this race just a few days before the race. The kids have been wanting to run in another 5k  and we still have a few states around us that need to be knocked off our Race the 50 States. We decided to find a race in South Carolina because the kids aren't going with us to Myrtle Beach in February when Owen and I run our marathon/half-marathon.

Owen found a race on the Clemson campus that sounded fun. We left Friday after the kids got home from school. Clemson is about a two and a half hour drive from here so we arrived at our hotel right around dinner time. Owen hopped on the computer to find us a restaurant that served pasta. He found a place real close to the Clemson campus called BRiOSO Fresh Pasta. They make the pasta right there and was some of the best pasta I have ever had.

We took advantage of the late start time and the hotel breakfast. After breakfast we headed back to our room and got all our warm running gear on.


When we arrived at the race we picked up our race packets and then headed back to the car to look through them and stay warm! Our packets were not green by any means but the kids enjoyed all the samples.  As it got closer to starting time we headed back to the starting line to scope out our competition. That's when we realized it was going to be a small race.


It was a beautiful out and back course. At the mile two marker I realize something was wrong, my watch was showing that we were only at 1.72. Kyle had a really great race but I think I pushed him a little too much in the beginning because he was having trouble the last half mile. Everyone was shocked at the finish line, not only was the race a little short (2.89 instead of 3.1) but we also had to remember our own time and write it down for them. I forgot to stop my watch until after I was through the finish shoot that I'm not really even sure what our time was.

The reason "prizes" is in quotes above is because of what we received.  I thought the screw-up with the race distance was bad, well the prizes gave it a run for it's money.  We were a little surprised to see the prize for winning the division was a small pack of band-aids donated by a local company.  Wow.

Even with the let downs of the race we had a really great family getaway and marked South Carolina off our Race the 50 states.
Posted by Lillywhite Family at 9:44 AM 1 comment:

Looking back at 2011
What an amazing year! Who would have known that we had a house full of runners? I'm so thankful that I decided to do the Couch to 5k program last January and that our friend Udit talked Owen into training for the 5k too. Running has brought so much joy into our lives. I feel so blessed that we found an activity that our family enjoys doing together. We've also enjoyed watching our friends and family catch the running bug.

Goals for 2011
Weight loss-Owen and I both met our weight loss goals
Become debt free- we didn't quite make our debt free goal due to all the traveling we did with our races, but we made a lot of progress.

Goals for 2012
1) We plan to continue or weight loss journey. We both have a little more to lose to get us in prime running shape.

2) Become debt free and have our emergency fund completely funded.

3) Keep a prayer journal. I came across the idea over here. I like the idea of going back and writing next to your prayer request how God answered them.

5) After Big Sur Marathon, I plan to take a short break from long distance and work on getting my 5k time below 30 minutes. I also want to train more with Kyle and Alicia.

7) Owen plans to run 50 marathons in 50 states by his 50th birthday. I am so excited for this goal. What better way to see our beautiful country than taking running trips with our family. Owen is 37, he has 12+ years to complete this goal. He plans to run four marathons per year. He completed his first marathon this past November and marked North Carolina off the list! He already has four lined up for this year:
Myrtle Beach Marathon, South Carolina (Febuary)
Big Sur International Marathon, California (April)
Mad Marathon, Vermont (July)
St. George Marathon, Utah (October)
Posted by Lillywhite Family at 7:59 AM No comments: