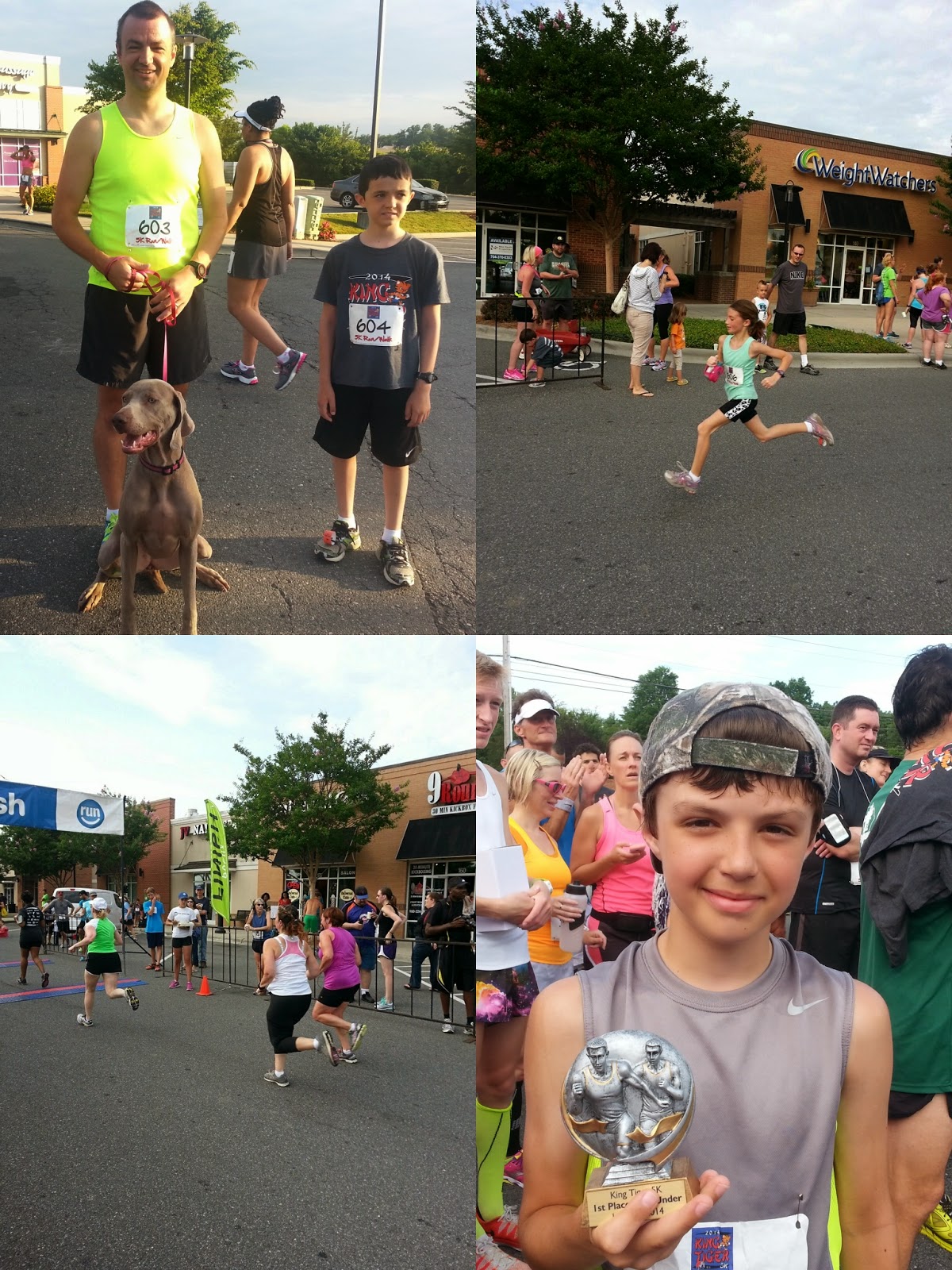 This race is a really fun race that we've done several times.  It is really close to our house.  This year I decided I would run it with Graycie.  It had only been 5 days since my marathon in Maine, and it was really hot, so I knew competing for a PR was out of the question.

During packet pickup, I asked the organizers if they allowed people to run with their dogs. I had seen people do it in years past, but wasn't sure if they were just breaking the rules or if it was officially allowed.  They said they were allowed, but asked that I start near the back and be mindful that some people are afraid of dogs. 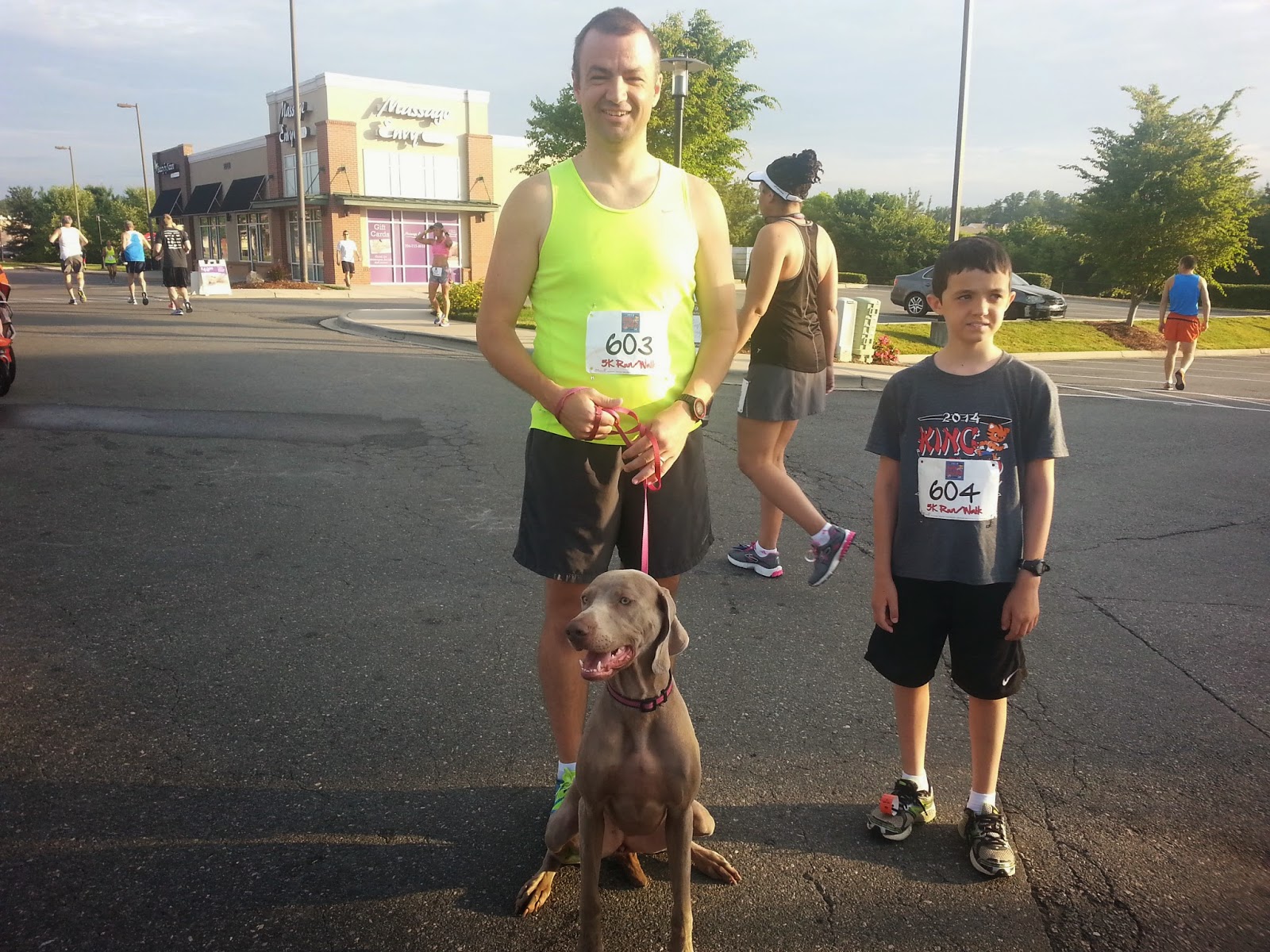 I lined up at the back, when the gun went off and all the people started running, Graycie couldn't understand why we weren't going.  Once everyone had crossed the start, we took off.  When I train with Graycie, we are by ourselves, so Graycie relies on me to know which way we're running.  During this race, with all the people in front of us running, she knew exactly where to go and made it her goal to pass as many people as we could.

We stayed way left of everyone else.  Especially at first, we were passing people by the hundreds.  I could not run fast enough, Graycie had tension on the leash the entire time.  It was actually nice up the hills, she was pulling me.  I'm always curious how fast I would have to be for her not to be able to keep up. I really enjoyed running the race with her, and we had no issues with other runners.

Michael had a really good time.  He was only 31 seconds off of his PR, on a really tough course in the heat.  He took first out of 37 boys 14 & under.  He even beat the 17 year old that he's racing in the GPX series (who had beat Michael in each of the previous two 5k's), which added to his lead for 1st place in the 19 & under division. 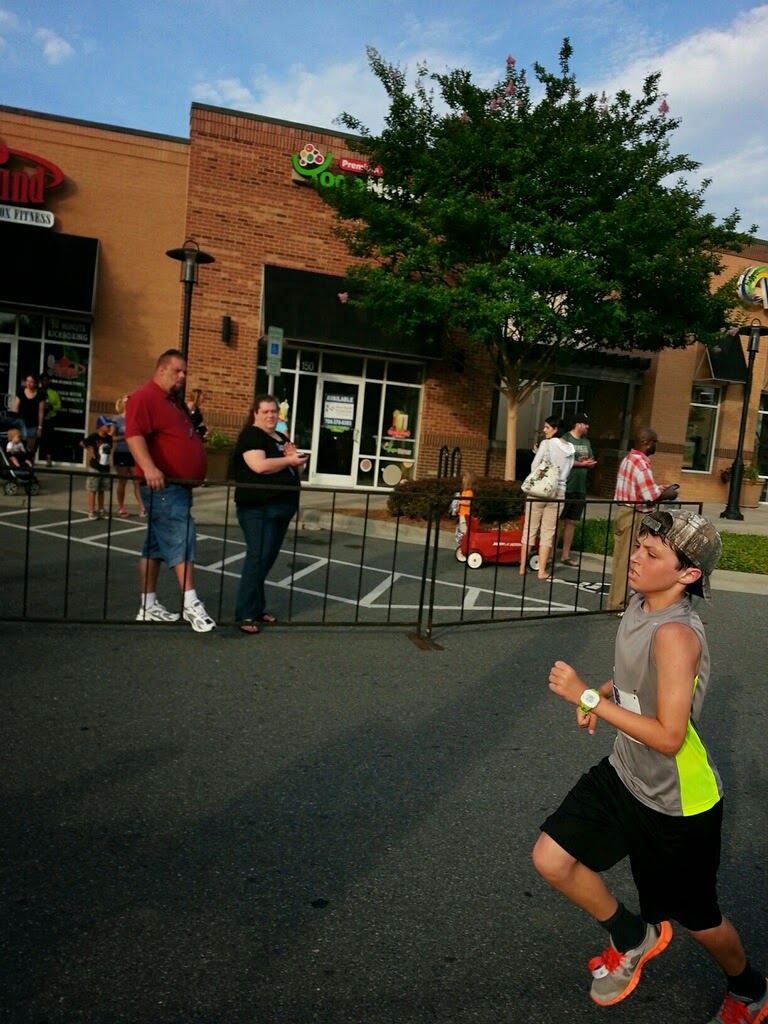 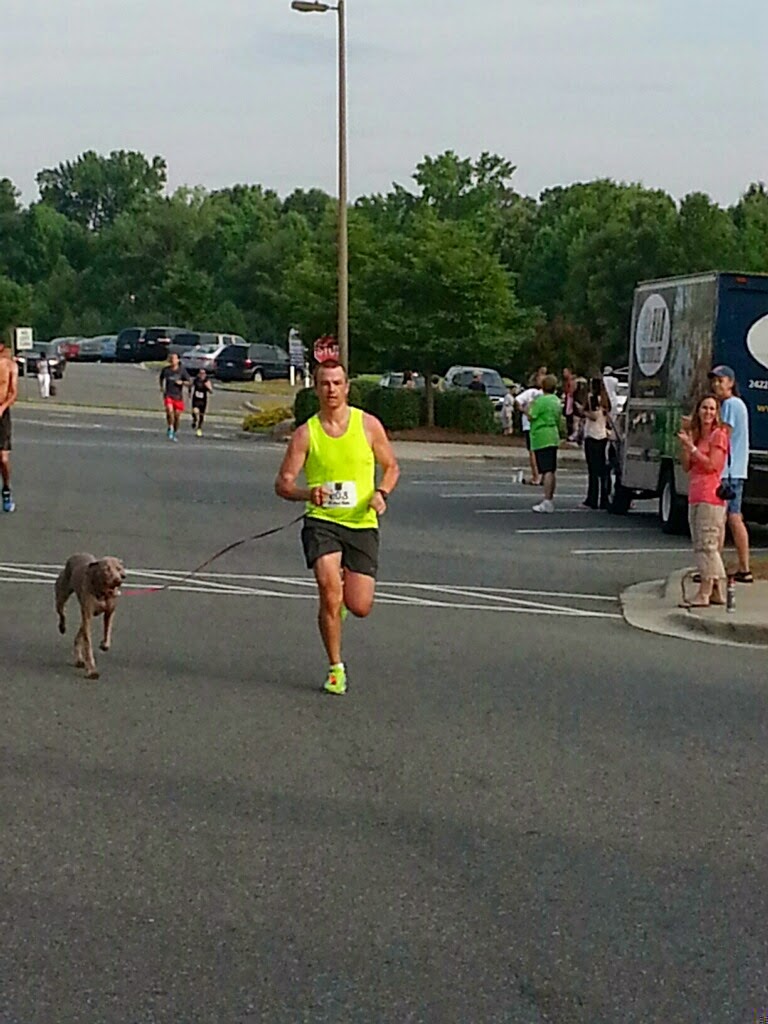 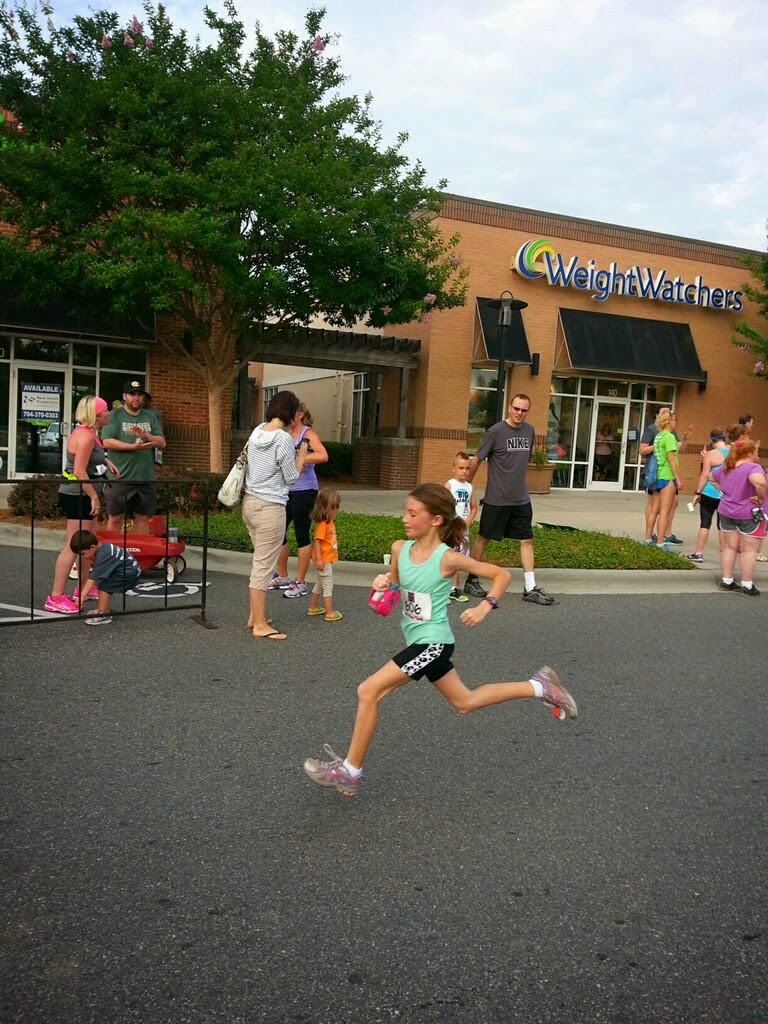 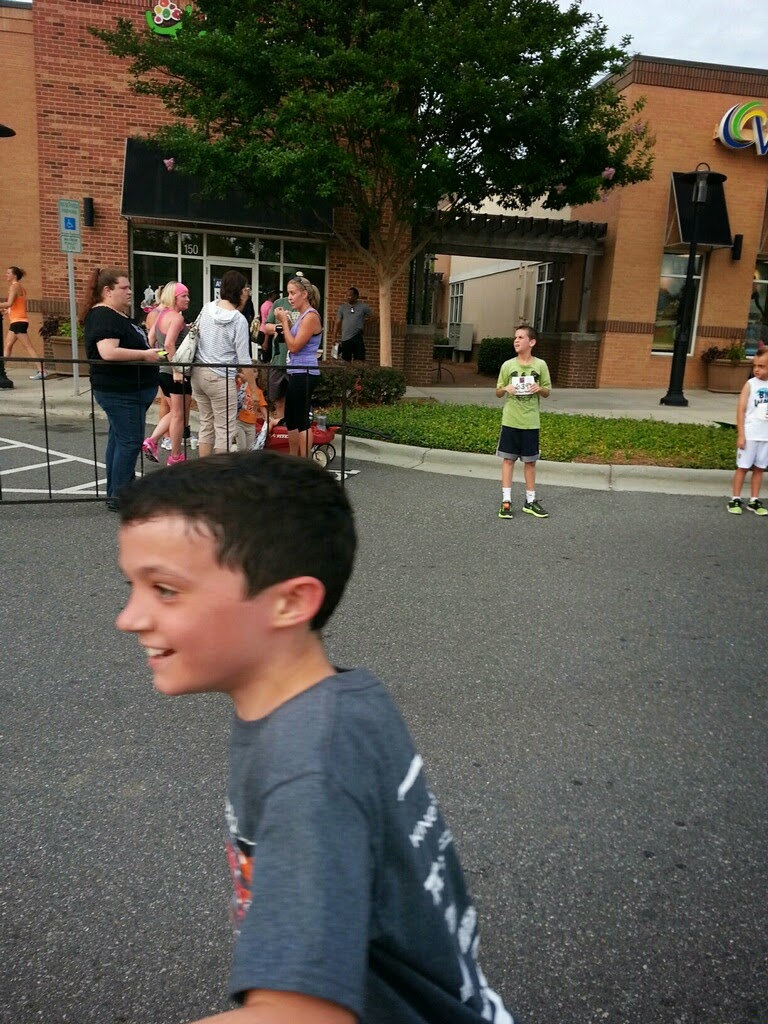 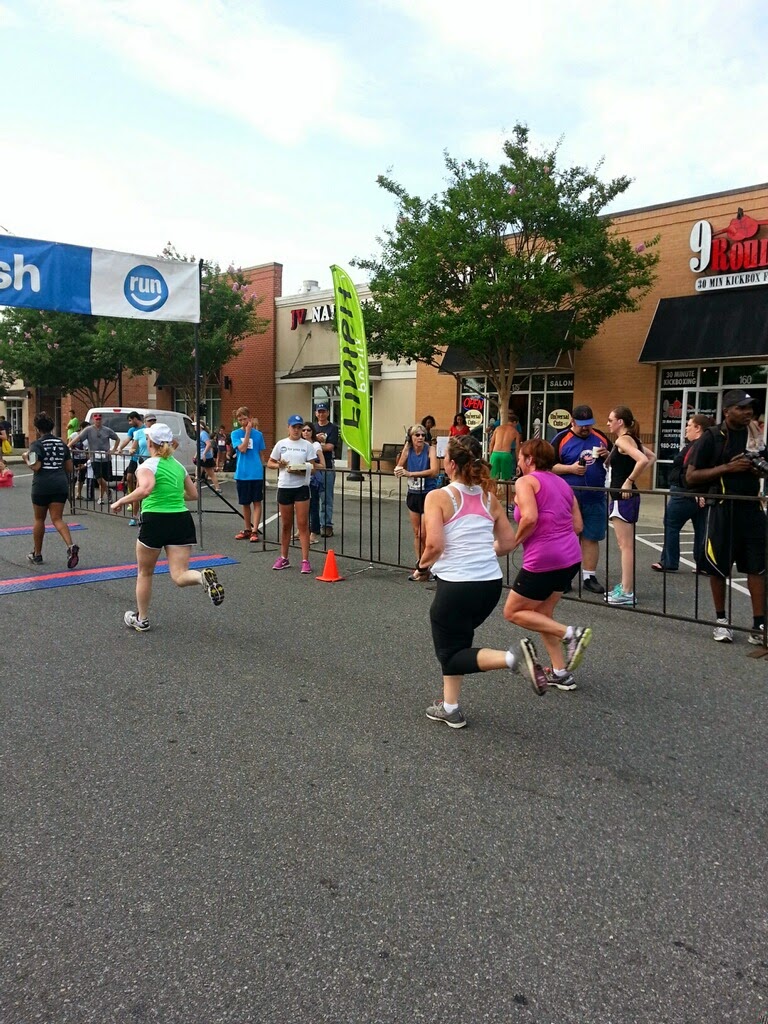 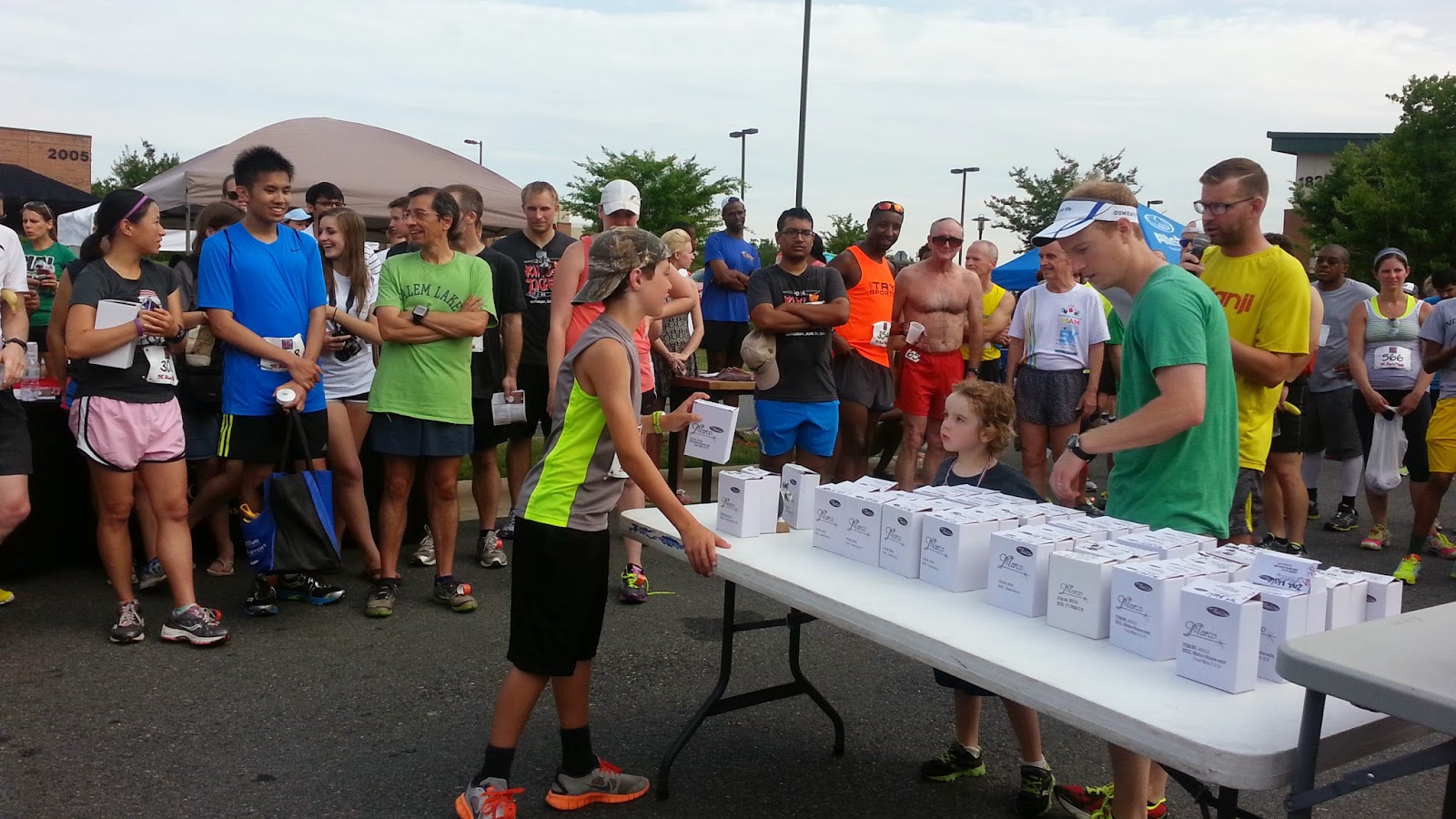 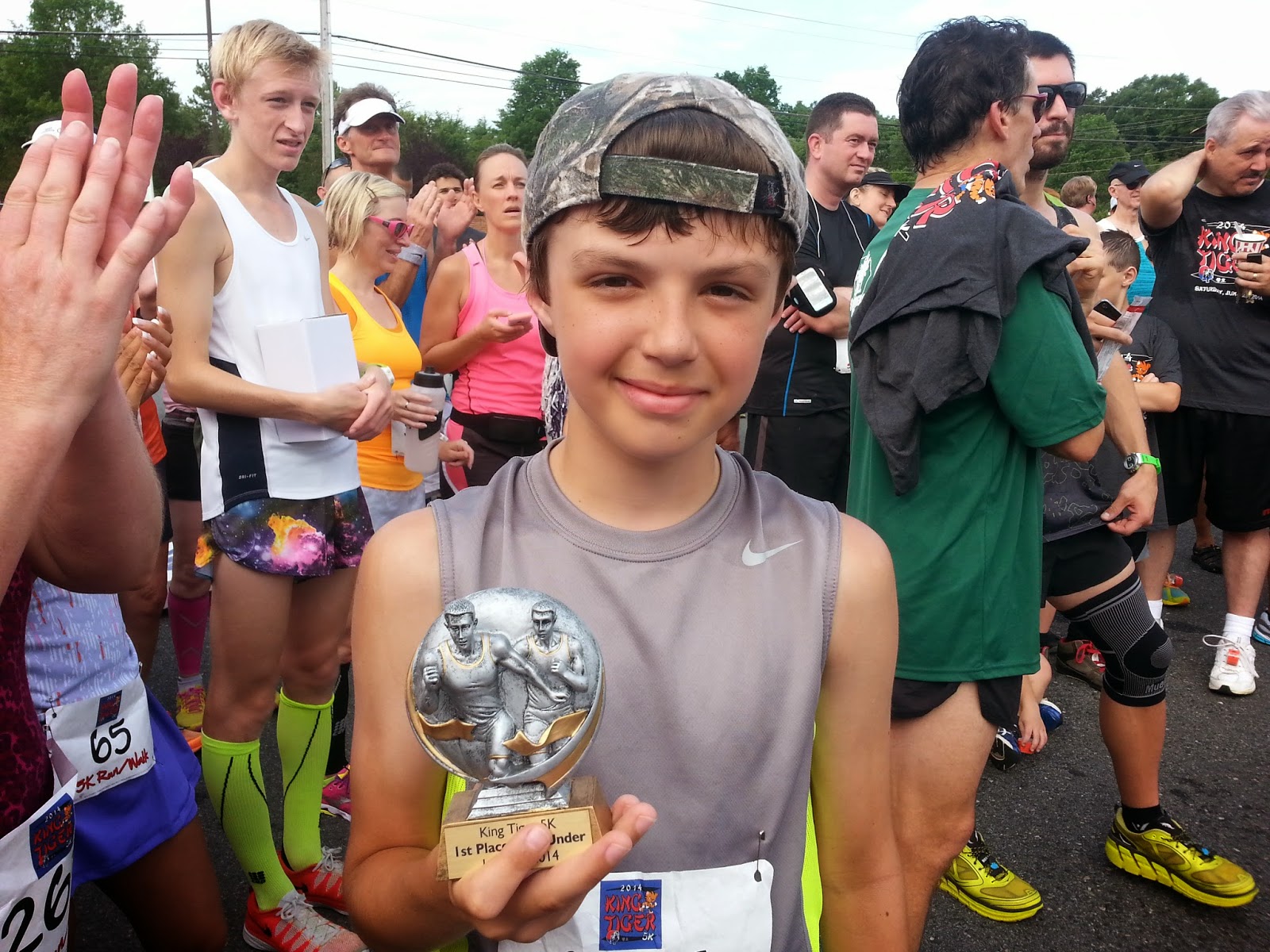 Posted by Lillywhite Family at 9:12 AM No comments: 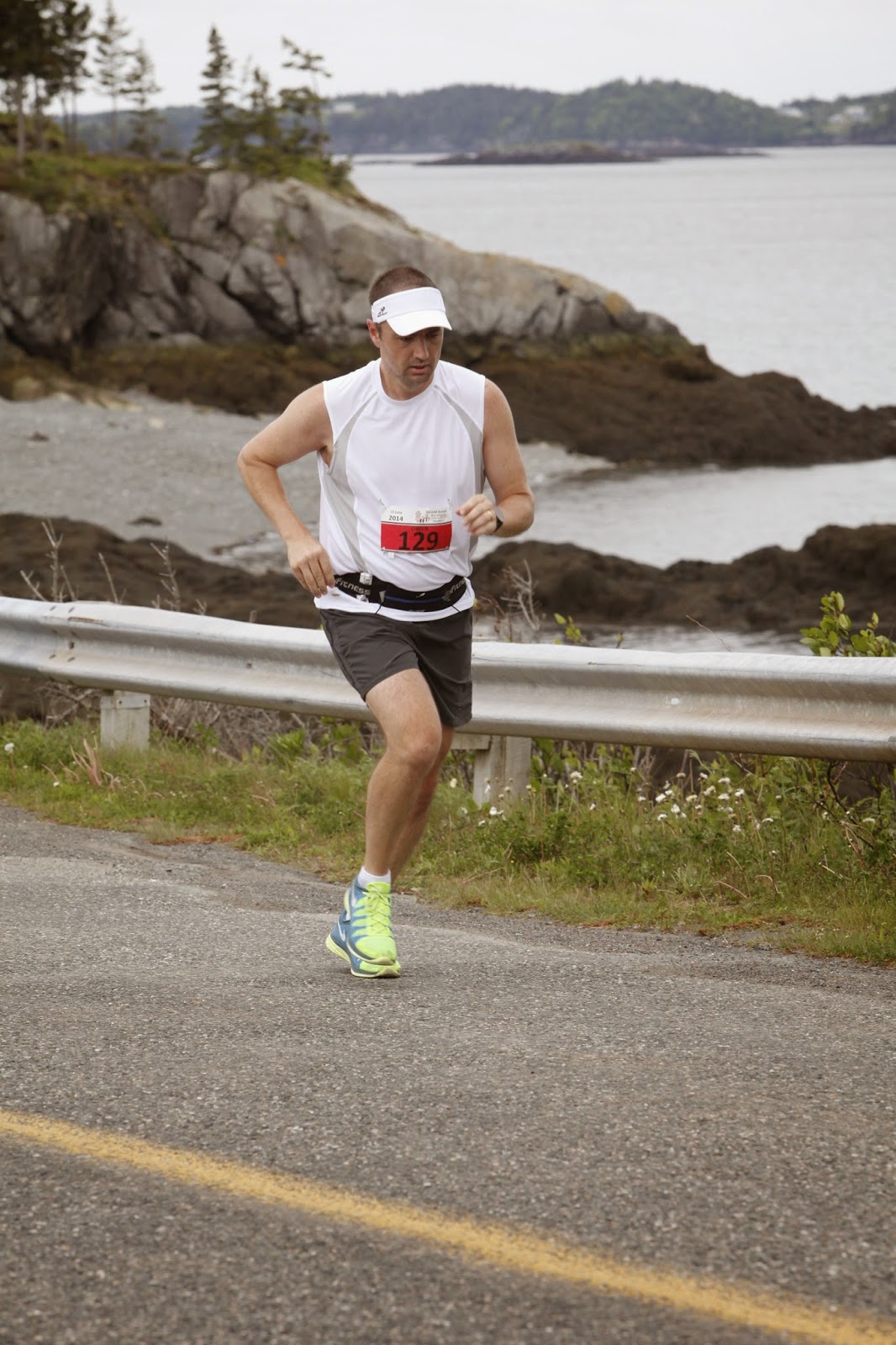 This trip was AWESOME! We loved it so much.  It started on Friday when Lynne was nice enough to drive us to the airport.  The plane was delayed a little bit, but we didn't mind since we had no plans for that night anyway.  We arrived in Boston, and rented a car. It was the smoothest rental ever, since I am now a gold member of Hertz.  When our plane landed, I had a text message waiting on my phone that told me what make/model, and the parking spot number. I walked straight to it, and drove away, just showed my ID at the exit.  NICE!

We drove two hours north to Freeport, Maine, which is a small city just North of Portland, Maine.  We got to the hotel at almost midnight, Friday night.  Saturday morning I woke up before everyone else and did my two mile shakeout run along the highway (nice wide shoulders).

Saturday morning, we had a good breakfast at the Holiday Inn Express we were staying at, then I finished some computer work I had to do for Microsoft, while the family took showers and packed up the hotel room.  Then we started our drive to Lubec, Maine.  It was roughly a four hour drive.  The packet pickup was pretty complicated, as we had to cross the U.S./Canada border in each direction in order to cross our name off a list, show our passports, etc. so that during the race we could run uninterrupted.  Because of this we had to pickup our bib in Canada, then pickup our shirt/packet in the U.S.  So I was a little paranoid about getting there before it closed.

We stopped for lunch along the way at a nice little restaurant, Headed North Grill & Spirits, in Newport, Maine.  It was really fun, and the food was delicious.  This trip was all about the fresh seafood.


The lunch tool a lot longer than I had expected, but we still had time as long as we didn't hit traffic or have some other delay. We decided to drive straight through to the Canada side, to pickup my bib.

We picked up my bib and saw everyone else eating, but I was worried about getting to the packet pickup in time, so we didn't eat there.  I did snap this picture of someone else's meal: 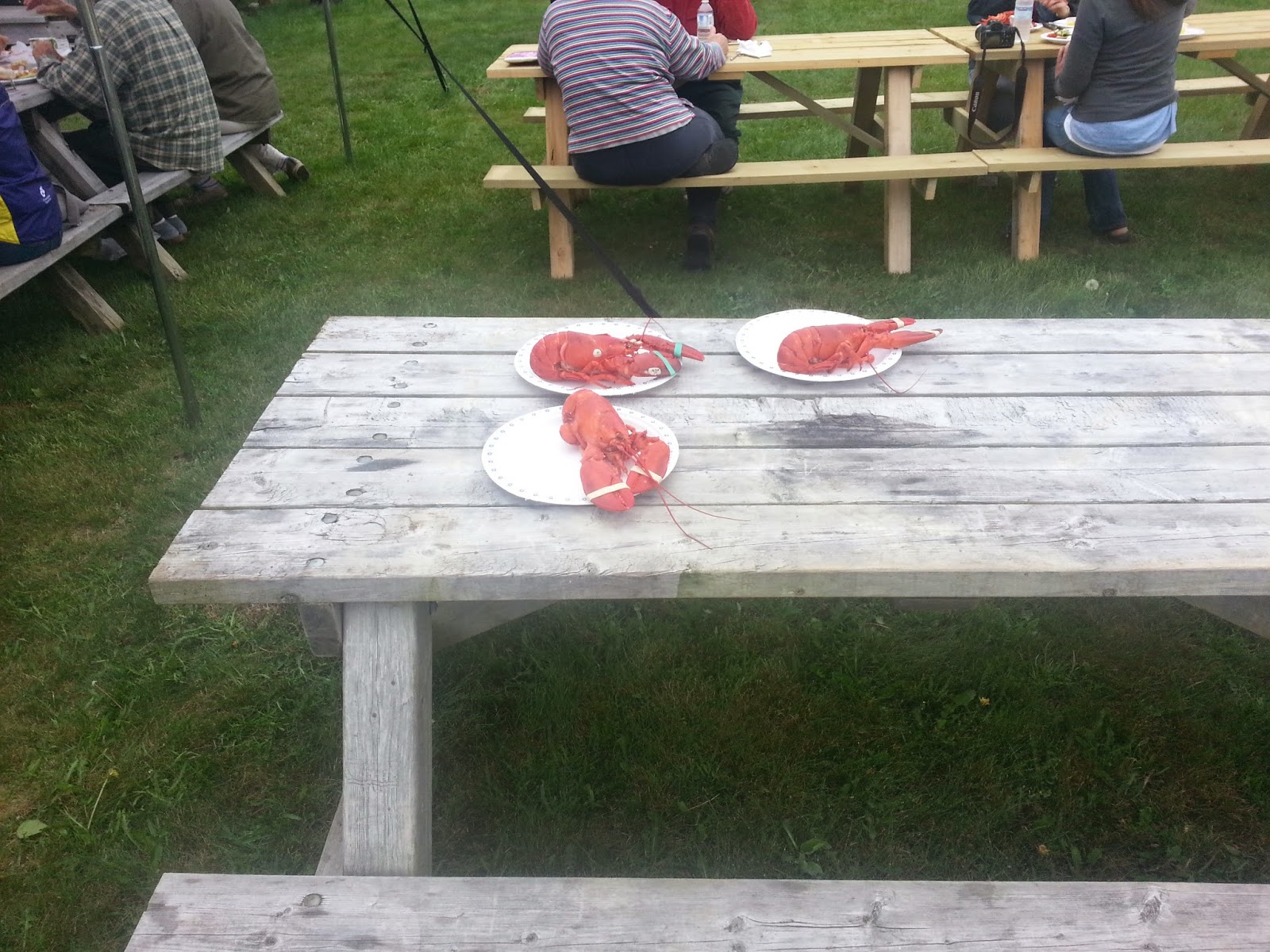 While in the park in Canada, we saw this speed limit sign. All the speed limit signs were in km/h, which took some getting used to, but this one was especially interesting because it was 15 km/h.  I've never run a 15k, but Michael has.  His finishing time was 1:08.  So he was almost speeding, if he was on this road!  Most of the roads we drove on were 40 km/h, and I kept finding myself going 40 mph, which meant I was speeding a lot.  I did not want an international ticket, and luckily did not get one. 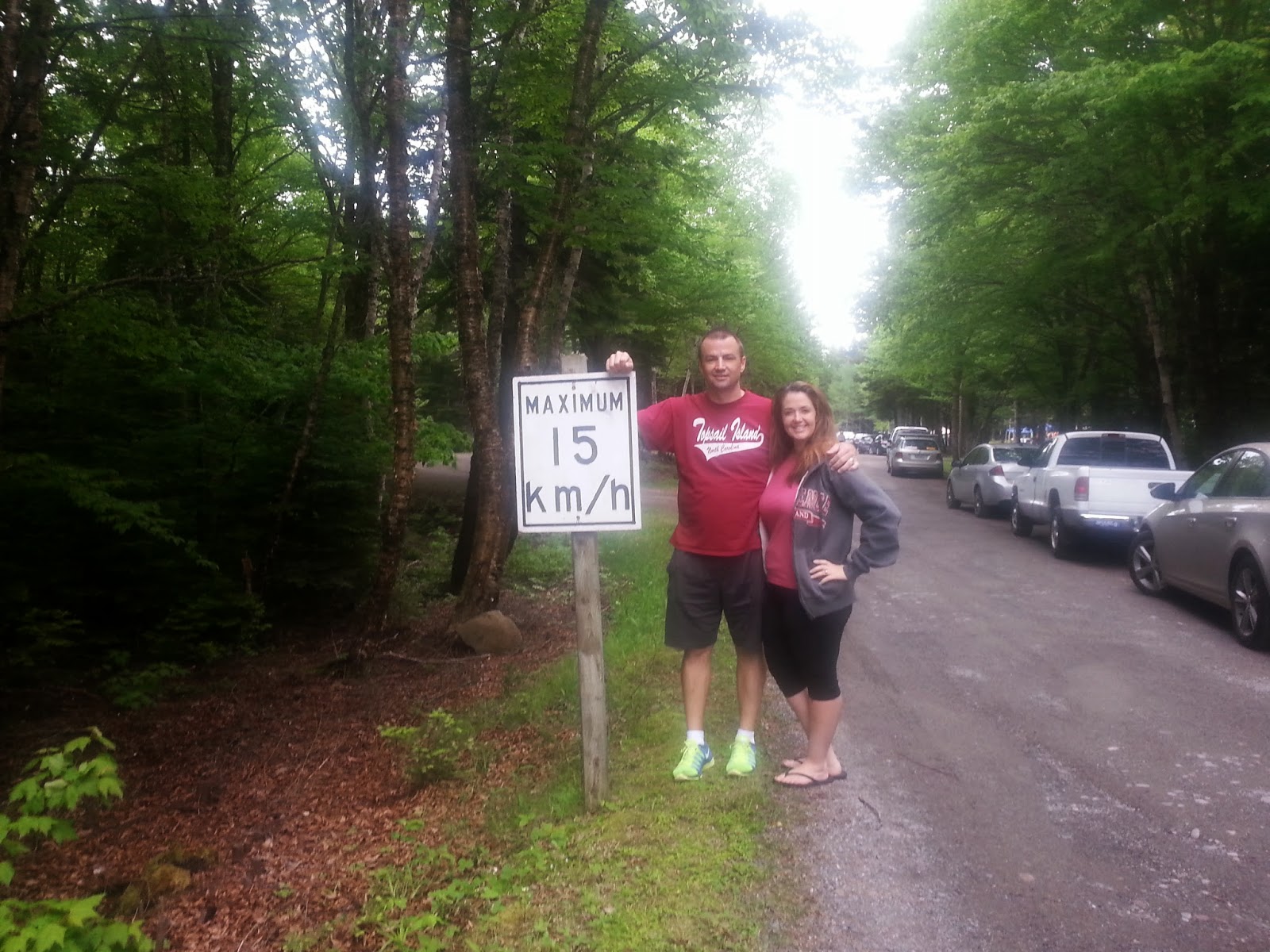 After I had my bib, we went to the packet pickup area in Lubec, Maine.  I got my shirt and packet, and enjoyed the included pasta dinner.  I didn't buy a ticket for the family, as I knew they would rather have fresh seafood, which we did next.

We got all checked into our hotel which was an old sardine factory they had converted into a really nice little hotel, right on the bay. Click this picture for a panoramic view from our hotel room.

Sunday morning I woke up at 4:30 AM in time to get ready and get to the bus that would take me to the start.  I was able to do that without waking anyone up, and just had a short walk to the school for the shuttle.  Malissa and the kids got to sleep in a bit because they only had to be out there in time to see me after 5 miles.

Because the marathon ran both in Canada and the U.S., they were planning on singing both anthems before the race. The only problem was the person scheduled to sing our anthem didn't show up. The P.A. announcer asked if any runners were willing to step up to the plate. I was really hoping someone would.  I even considered doing it, but just couldn't.  Luckily someone did, with no notice, no practice, and did an AWESOME job.

The race started, and after a mile or so, I noticed a lady who was wearing a pace tattoo.  I remembered Taz Running had received an order for this race, so I asked her if that was a Taz Running tattoo.  She said it was, I told her I owned the company and that I made that tattoo for her.   She seemed a little creeped out like I was stalking her at first, but then we had a nice conversation.  I slowed down to let her run her race.  Come to find out she finished in tenth place overall, 2nd place female, and beat her tattoo pace by five minutes on a really difficult course.  She wrote a nice review for Taz Running on our Facebook page.

At mile 5ish, I saw my family waiting for me and got a huge burst of energy.  I love seeing them cheering for me.


Shortly after that, I crossed the FDR Memorial Bridge and ran the next twenty miles in Canada.  The views were stunning, I loved every minute of it.  The hills were non-stop, not huge, but never flat. Up, down, up, down, etc.  I knew this going into it, so my goal time was 3:45, but didn't really care as long as I beat 4 hours. 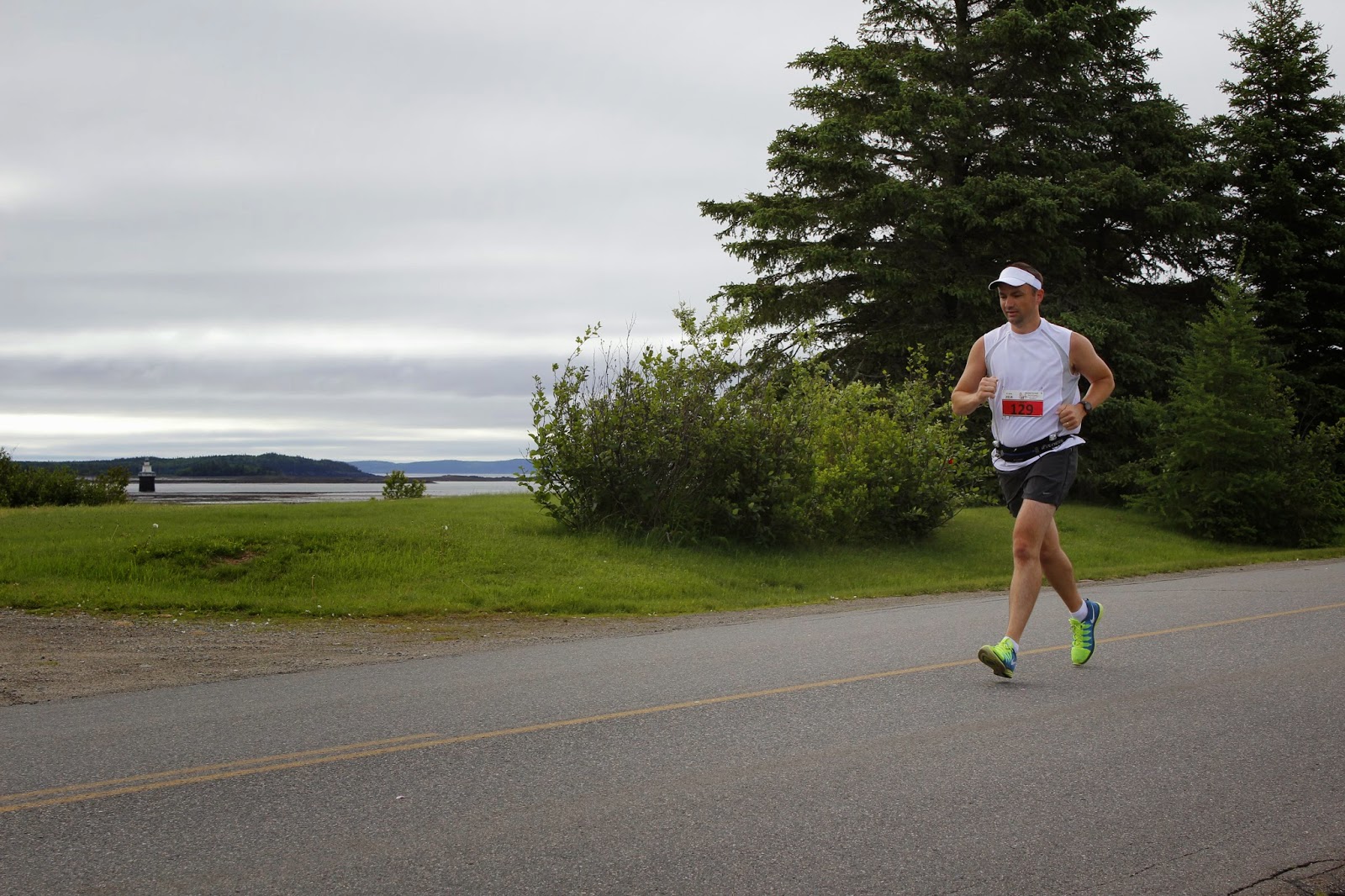 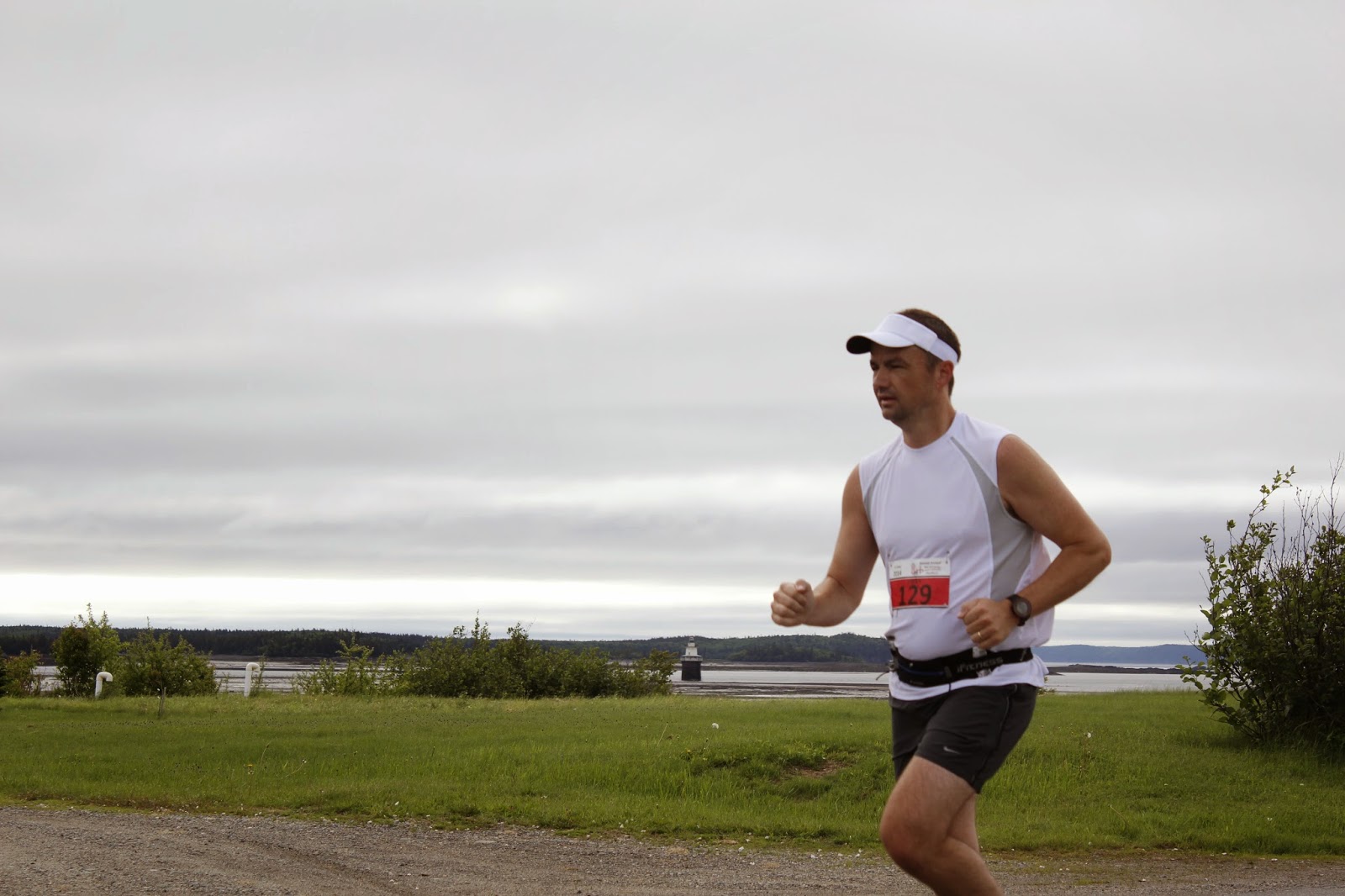 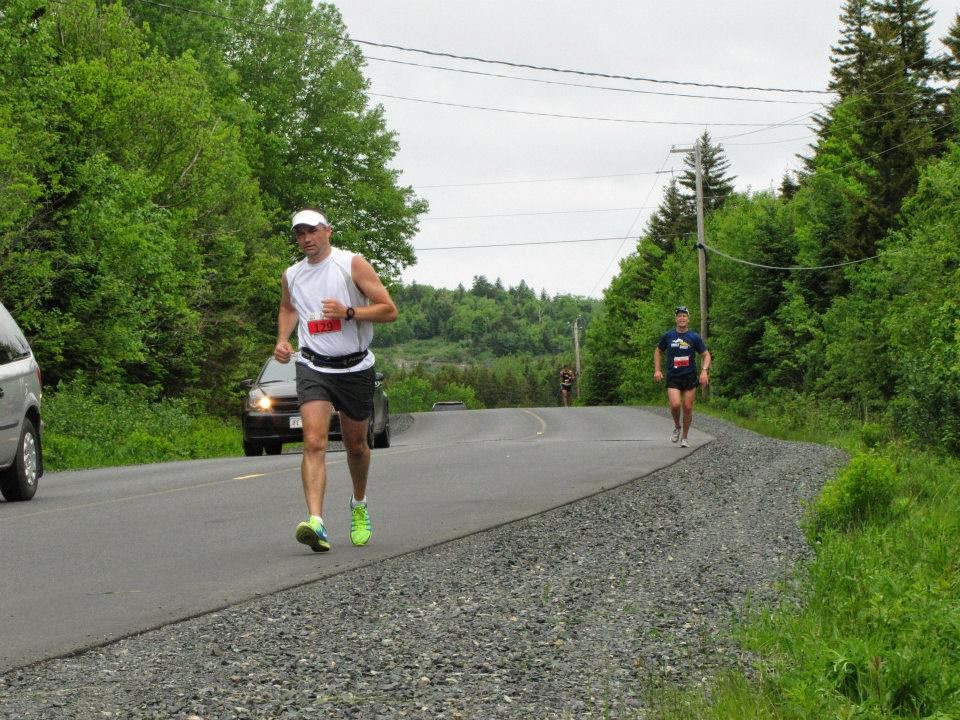 I started slowing down gradually after mile 13.  That's when the hills started getting worse.  The turnaround point was at mile 16, which meant I had the worse hills from mile 13-19, just as marathons get hard anyway.

When I saw my kids waiting for me, I made a snap decision that this would be the first time I grab them and have them finish with me.  I usually try not to do that because it really can clog up the finish area if everyone did that.  But there was nobody in front or behind me for a long way, and it was Father's Day, so I did it.  I really enjoyed that moment. Marathon finishes are such an emotional high, and to do it on Father's Day, with all my kids, on Marathon #25, was especially great.  The lady handing out the finisher medals gave mine to Alicia and asked her if she'd like the honor of placing it around my neck.  That was cool, too. 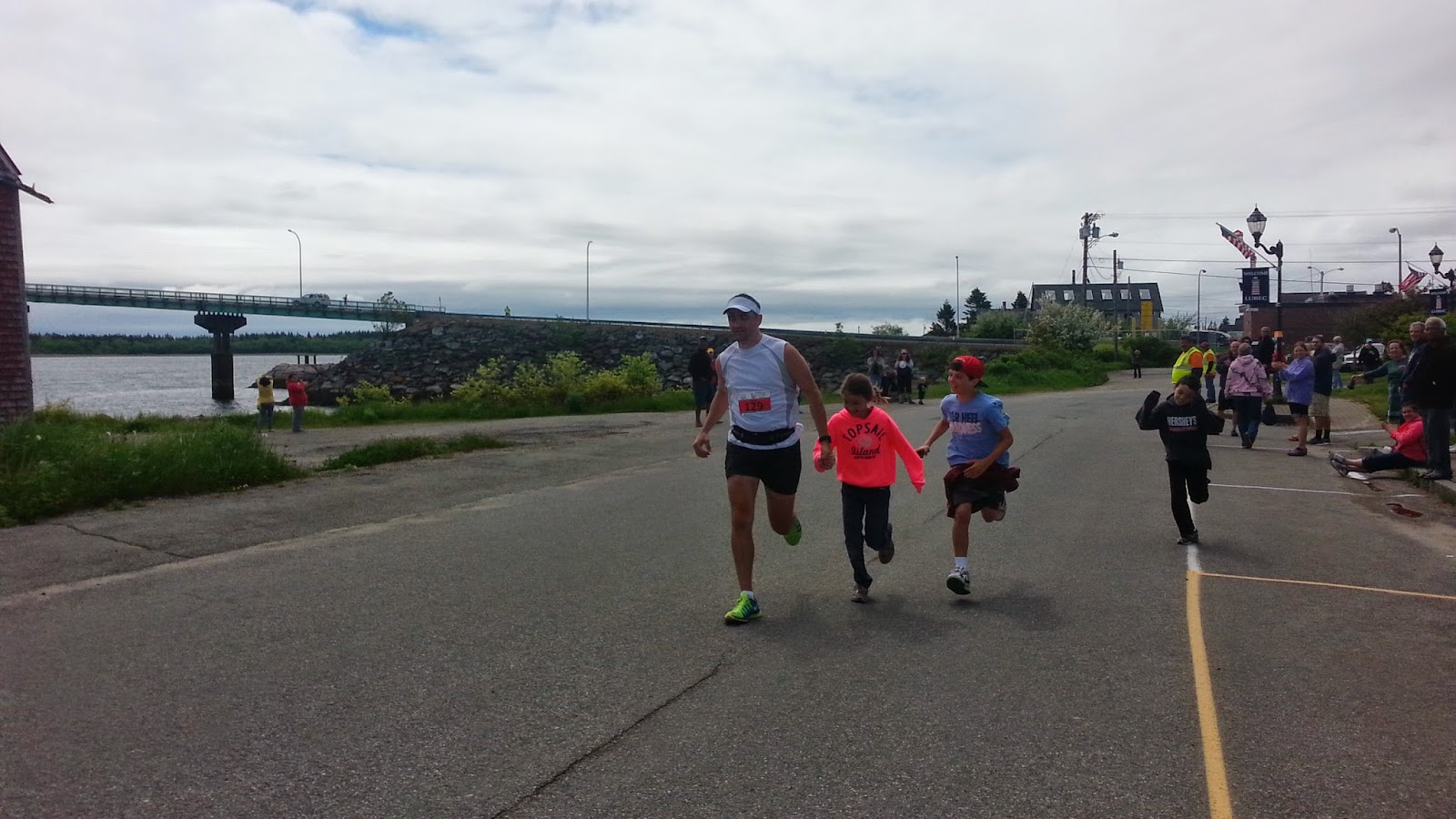 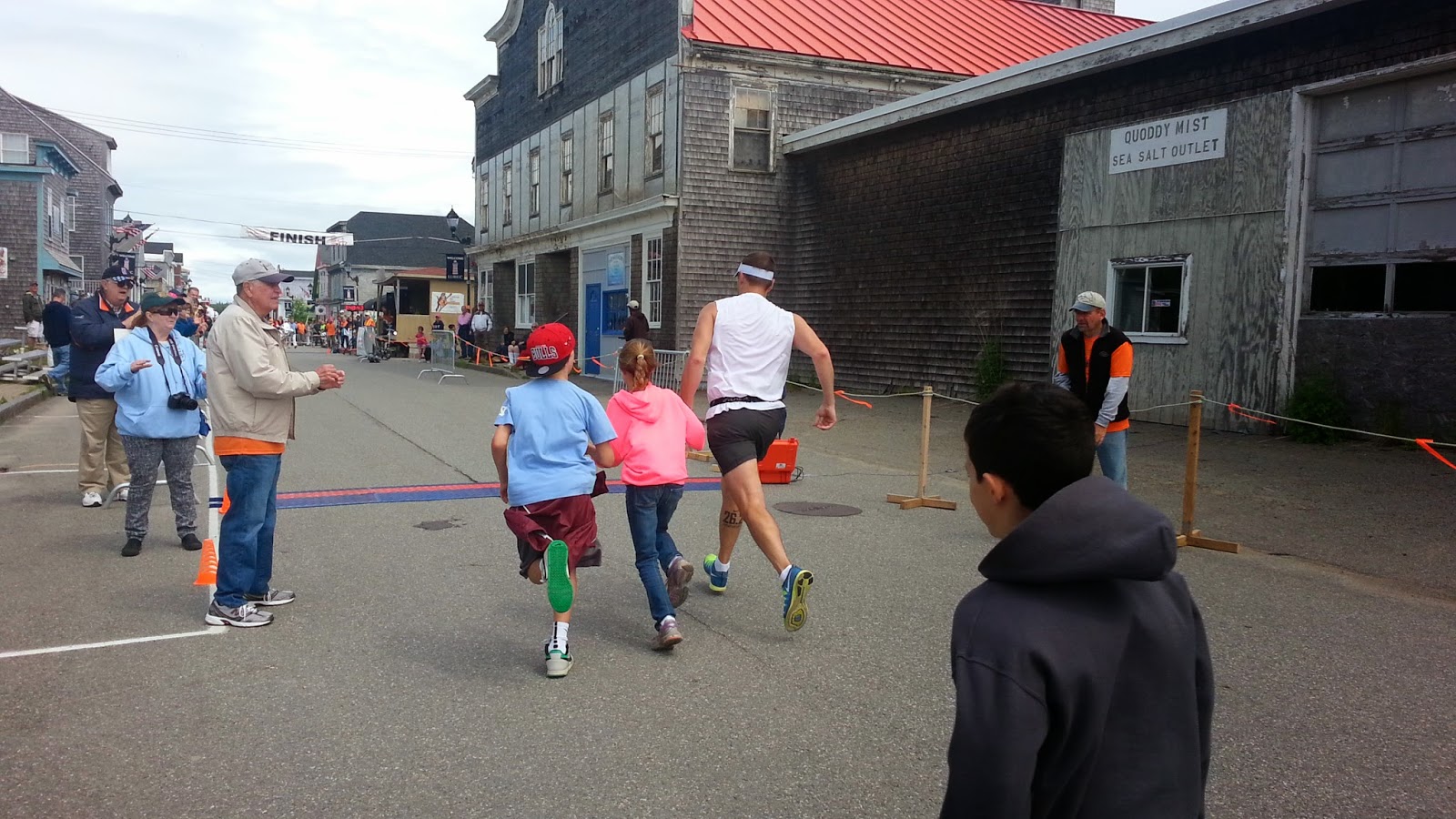 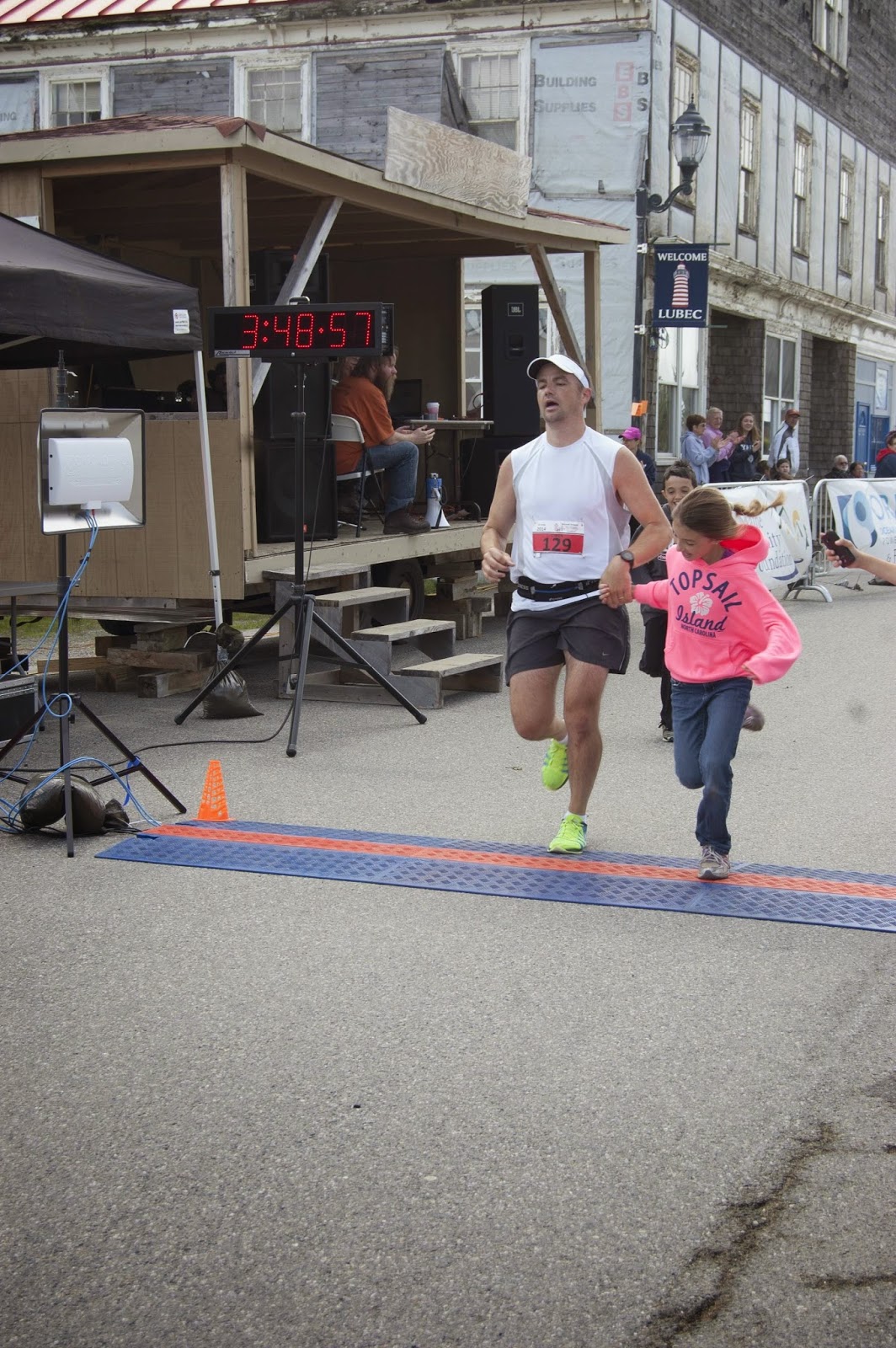 
After the marathon, I had my chocolate milk, then Malissa treated me to a delicious ice cream. I ate it while relaxing looking over the bay.  I loved that. 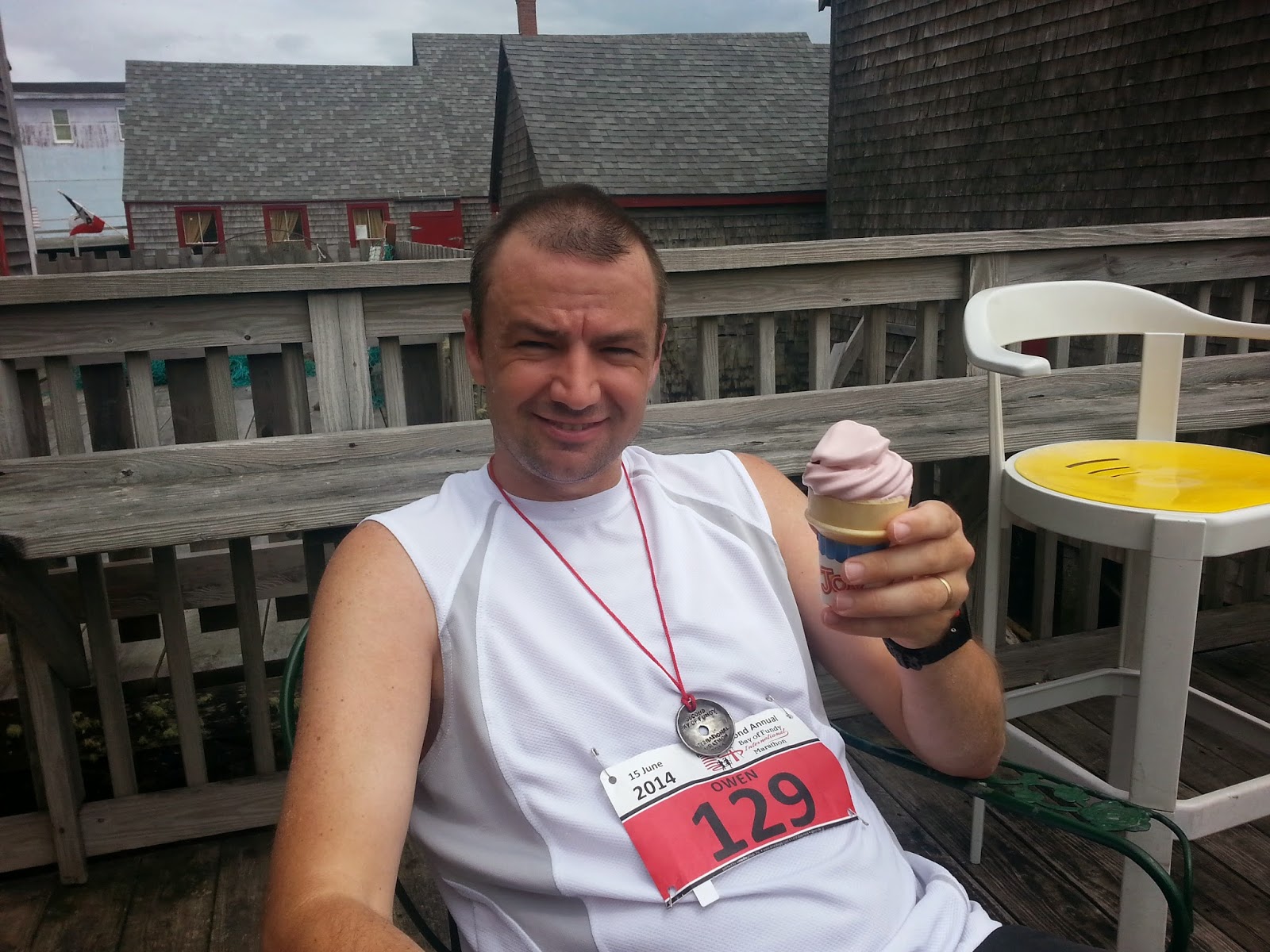 After I showered and relaxed for a bit, I wanted to show the family everything I had just seen, so we got in the car and retraced my steps. 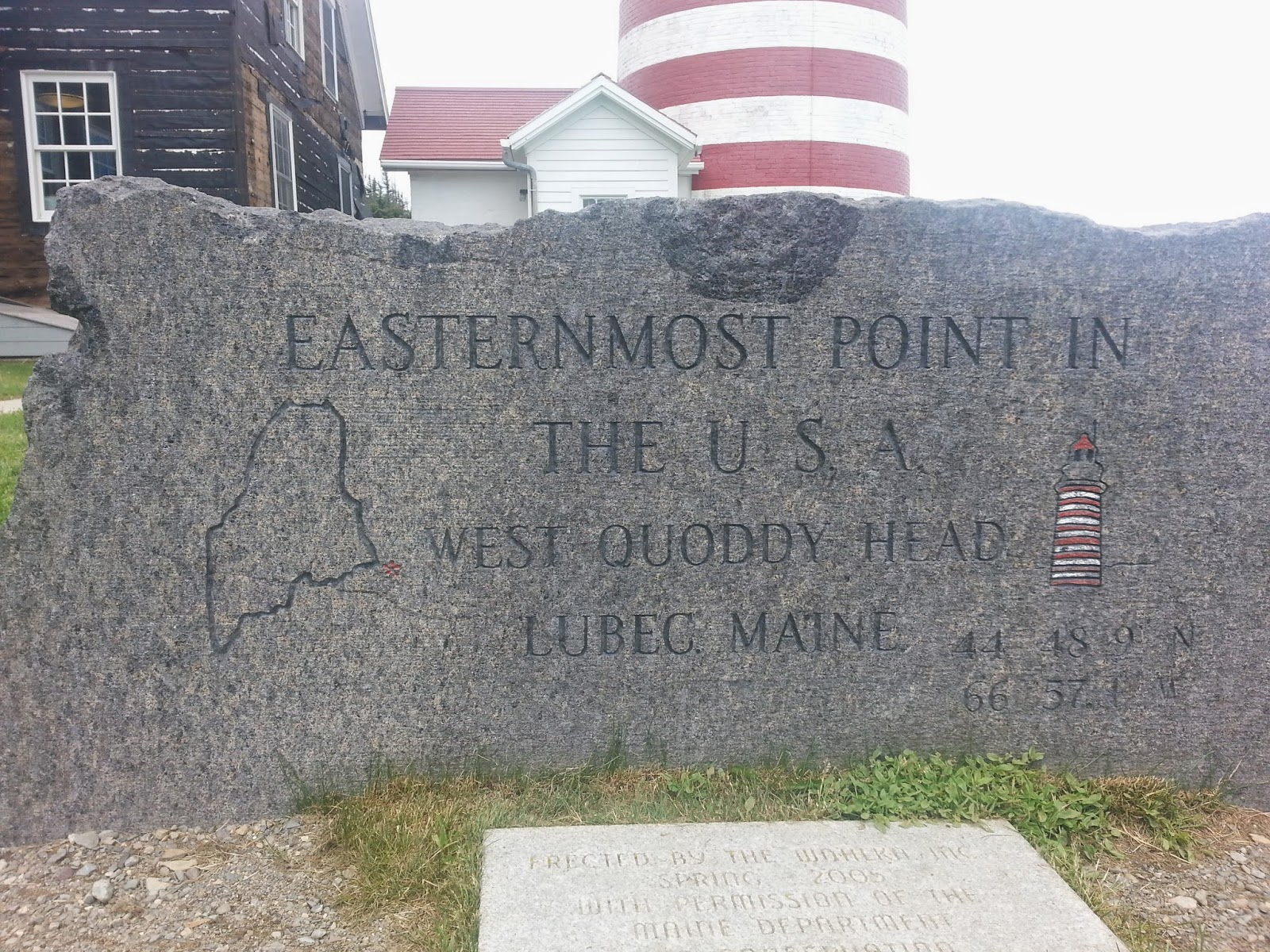 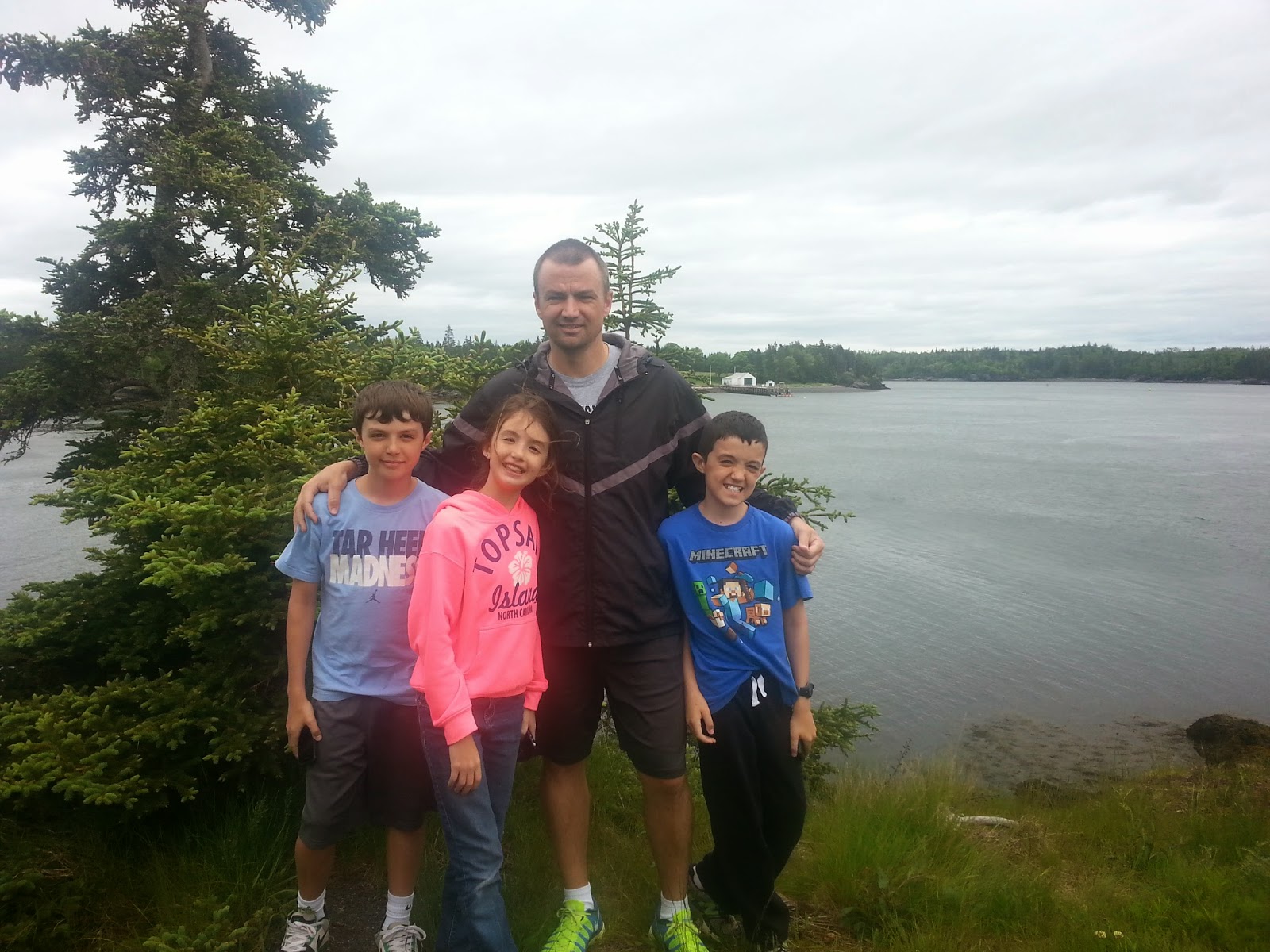 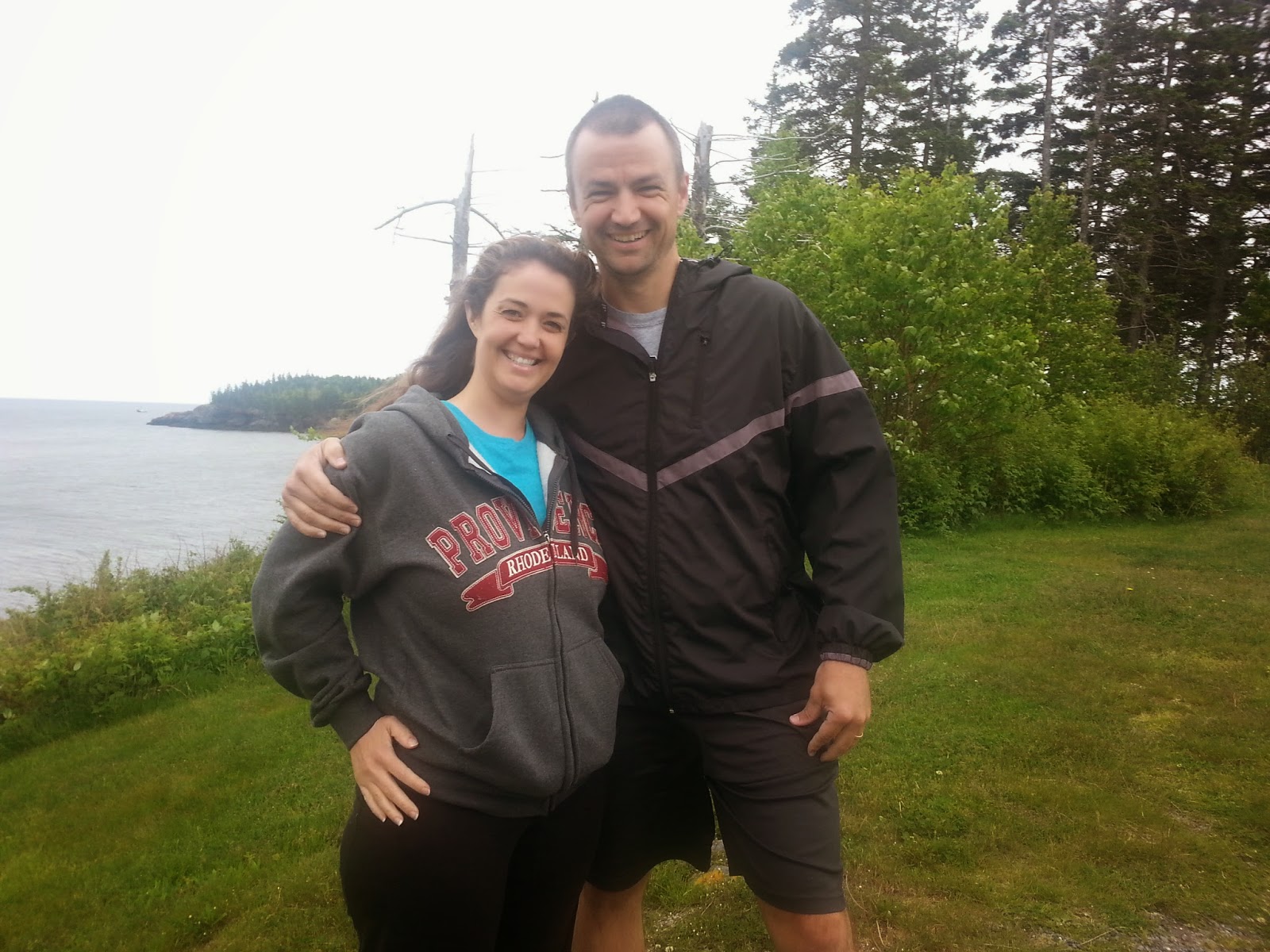 Monday morning we woke up and had a six hour drive to Boston before our flight back home at 7PM.  On the way out we stopped at the welcome sign we noticed on the way in.

Once in Boston, we drove to the finish line of the Boston Marathon on Boylston Street. It was pretty emotional, both because of how hard I've worked to qualify, and because of what happened on that street last year.


After 25 marathons, I now have a new favorite, it was so beautiful, such a fun trip.


UPDATE: here is the updated marathon map in my office: 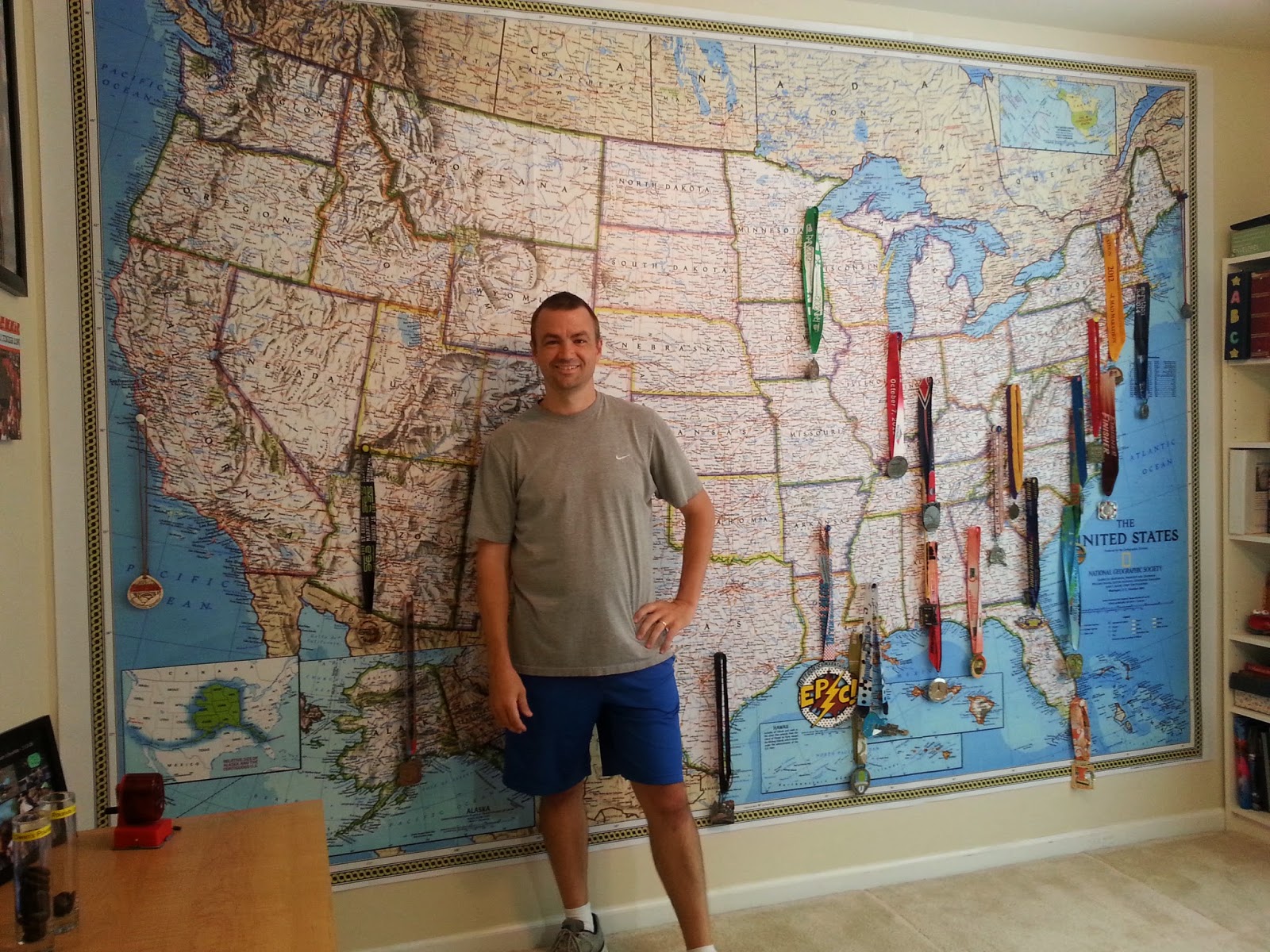 Posted by Lillywhite Family at 3:52 PM No comments: