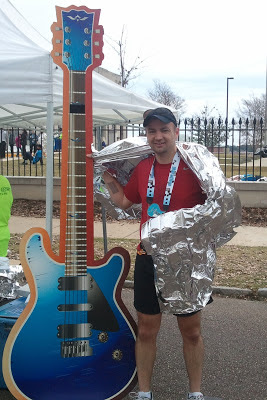 I signed up for this race back in June when they were offering discounts for early registration. The registration was only $45. We decided we'd drive to Phenix City, Alabama as our half-way point.  So both Thursday night and Saturday night we stayed with Malissa's brother, Michael.  Great, but short visits and FREE!

The kids were excellent again in the car for four straight days of five and a half hours of driving.  Thursday we arrived at Michael's house in Phenix City, Alabama at about 11:00 PM.  We talked for a short time, but then went to bed.

Friday, my son Michael and I woke up at 6:30 AM to run my two mile shake out run.  We left for Mississippi immediately after that.  We arrived in Jackson around 1:30 PM and got checked into the hotel.  We stayed at the Marriott in downtown Jackson.


After we checked in, we got a text from Elizabeth.  We follow each other's blogs after meeting in Park City, UT.  She was running the half-marathon and we met in the lobby and talked while walking to the expo.

The expo was pretty small, but very organized and not nearly as hectic as most are.  I got my number and we made the walk back to the hotel.

For dinner we had made plans to go to a local Greek-American restaurant (that served spaghetti) that was really close to the hotel, but they were closed.  So we decided to drive 10 minutes to an Olive Garden in Jackson.  It was absolutely delicious as always.

Saturday morning, I did the same routine I always do, which is to set the alarm for 2 hours prior to marathon time.  I had my bagel and banana, then got ready, trying to be as quiet as possible to allow Malissa and the kids to sleep in since we only had to walk a couple of blocks to the start.


It was pretty cold at the start, somewhere in the 35° range.  Normally I would run with my throw-away sweater for a mile or so, but I was wearing my new GoPro HD Hero 3 camera, and wanted to film the entire race.  So I threw my sweater away at the start line.

I lined up way further back than normal. This is my way of forcing myself to go slow at the start. But I went too far back and was behind a bunch of walkers (see video below).

The first part of the race was on a very wide road, with two lanes of travel each direction and a center turn lane.  Yet before the first mile marker they already had the runners coned off to only the far right lane.  Why do races do this?  At 7 am on a Sunday morning there is almost no traffic.  At least at the start, why can't they have the runners take up the three right lanes, leaving two lanes (one for each direction of traffic)? Not only for congestion reasons, but it also gives more options for finding a running surface that isn't full of potholes and banked. That was pretty frustrating.

The crowd support was amazing.  Not so much in quantity, but in quality.  Everyone was thanking me individually for coming out.  The volunteers were perfect.  The course was so-so, lots of potholes, and not a lot of pretty scenery, but nice neighborhoods.

I settled in to a 8:20ish pace for the first 13 miles. I even snapped a picture of myself and posted it on facebook as I was running. 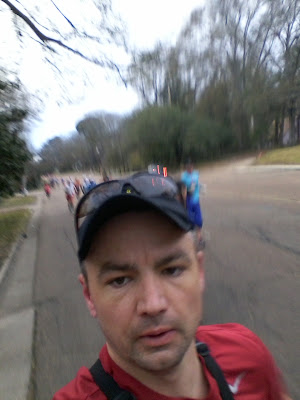 Malissa and the kids were hanging out waiting for me to finish and got to partake in some free entertainment: 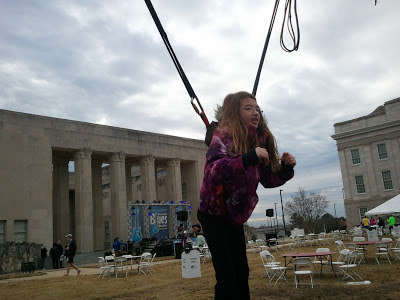 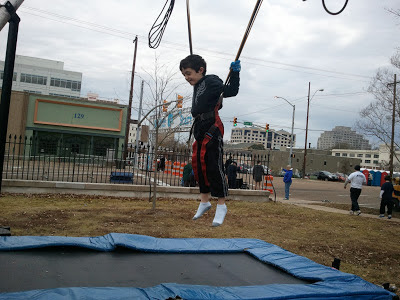 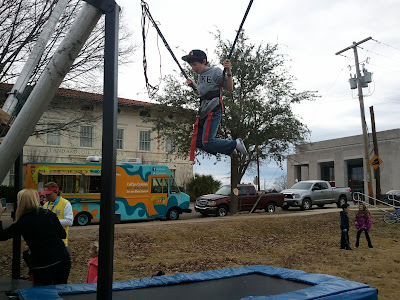 For miles 13 thru 22 I was around an 8:30 pace.  I could tell the hills were slowing me down a little bit and wanted to save some for the end.  Malissa and the kids came and cheered for me at the 21.5 mile mark.  That was a good boost, but it only lasted a mile or so.  I crashed shortly after that and had to mix in a few walk breaks.  Miles 23 throu 25 were each in the 10:20 range due to the walk breaks. This part of the course was pretty ugly and I was out of energy, so not very enjoyable at all.

Mile 26 I saw my hotel so I had a little boost of energy and actually felt OK finishing.  It got colder and started to rain. My goal was 3:40, but I knew after mile 21 I wasn't going to reach that. I told myself I'd be happy with anything under 3:50.  I finished at 3:48:29.  One of my slowest marathons, but with only four weeks between marathons, and with me being at my heaviest since I started running, I'm happy with the time.  I'm not happy with my weight, which is why I did this.

The post-race food was plentiful, but it was so cold by then.  The pizza was near frozen, but still delicious.  They had tons of food, but I was so cold I just wanted to get back to the hotel.

Malissa and the kids had already showered and gotten ready while I ran so I was able to take my time and relax while showering.  We checked out of the hotel, and made are way back to Alabama.

Sunday we had a great breakfast with both of Malissa's brothers at Cracker Barrel, before driving the rest of the way home to Charlotte.

Here is the video:


Here is my Garmin data:

Looking back at 2012
Races, and running in general, have definitely been at the center of our 2012. We had a great year and look forward to another great year in 2013.

2) Debt: We made progress, but have not completed it yet.  We did a TON of traveling and made great memories.

3) Malissa's prayer journal: She didn't do very good with this.

4) Owen's 2,400 miles: I only planned on running 4 marathons in 2012 which left a lot of weeks to rack up the miles.  I ended up running 9 marathons in 2012.  Because of tapering down the miles before each one, and recovering after, plus my injury in February/March I fell short of my goal. I'm really happy with 1,935 miles.

5) Malissa's goal for after the Big Sur Marathon: she planned to take a short break from long distance and work on getting her 5k time below 30 minutes. She also wanted to train more with Kyle and Alicia:  She hasn't yet broke the 30 minute barrier, but did lead a mom/daughter running group that was very successful.  Kyle decided he didn't enjoy running as much and enjoys riding his bike more.

6) Michael planned to run in the Run For Your Life Grand Prix Series.  Michael did awesome in this series, out of hundreds of competitors in the 19 & Under division, he took 4th.  Only the top 3 got awards, but at age 11 he understood how awesome his accomplishment was.

Goals for 2013
1)  Weight loss: We both want to get to our ideal weight.
2)  Move to Utah: We plan on putting our house up for sale and moving to Utah once it sells. We hate to say goodbye to all of the great friends we've made here in NC, but really miss Utah.
3)  Owen's goal of 2,000 miles.  I came just short of it in 2012, but hope to stay healthy enough to reach it in 2013.
4)  Freedom from debt: It has been an incredibly long journey, but we are very close to becoming debt free.
5)  Michael wants to beat his PR in the half-marathon.
Posted by Lillywhite Family at 9:06 AM No comments: