Training With The Kids

The last few weeks we haven't had much time to work with Kyle and Alicia on their 5k training. We have been spending most of our time getting ready for the half marathon. With their 5k being 19 days away we knew it was time to get serious so yesterday we walked up to the middle school track to run a mile with the kids.

Kyle, Alicia, and I started running together. Early on Alicia pulled away from us. She finished her mile at 9:20. Kyle and I held hands while we ran and talked about school and his favorite computer game. I have learned that he runs best when he is talking. So, usually when he wants to stop and walk I start asking him questions and slowly he forgets walking. We finished our mile at 11:46.

Now that Michael is done training for the half marathon he wants to work on getting his mile time down so he can beat his elementary school mile record. This is his last year in elementary school and he is determined to set a new school record.

The school record is 6:06. Michael will have two chances to beat the record, one in the fall and the other in the spring. 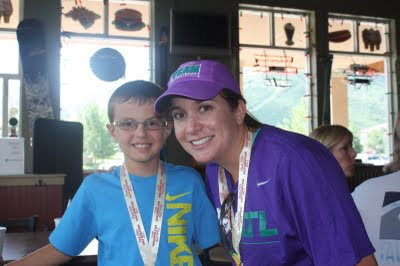 picture taken from Elizabeth's blog
Meet Elizabeth. She is one of the people that stopped to talk to Michael after he finished the Park City Half Marathon. She was blown away that at 10 years old, Michael had just finished a half marathon. I remember her asking him his time and then her saying, "So, are you training for Boston next year?!". She wrote about Michael on her blog. Check it out.
Posted by Lillywhite Family at 11:58 AM No comments:

It's been a week since I ran the Park City Half-Marathon and my feet are finally healed. I made the mistake of wearing the wrong shoes to an amusement park the day after the race and boy did my feet pay the price. This was one of those rare times that Owen was able to say, "I told you so."

For the past few weeks I have been contemplating what training I would do after I finished my half marathon. I have eight months until the Big Sur Marathon and want to use the majority of that time getting my pace time down. My biggest fear right now is being picked up by the "pokey wagon".  I have decided to follow Hal Higdon's Half Marathon Training Guide again but this time I will follow his advanced training guide.

I'm looking forward to lacing up my running shoes in the morning!
Posted by Lillywhite Family at 6:53 PM No comments:

In preparation for my marathon in November, I am following Hal Higdon's Advanced 1 Training Guide.  It calls for one long run per week, that gets longer and longer.  Today's run was 16 miles.  My previous long was 14.

I've increased 2 miles before, but this was the most noticeable increase yet. I was loving it all the way up to 12 and 13 miles, but wow were my legs tired after that.  No cramps or issues, just very tired muscles.

Hurricane Irene was pounding us here in North Carolina as I was running this at 5:30 AM, but we're inland enough that is was beautiful weather here.

Posted by Lillywhite Family at 9:07 AM No comments: 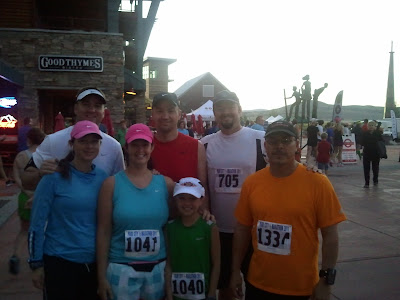 We have never looked forward to something as much as we looked forward to this weekend.  Not only was it a distance we had never ran before, but two of my brothers (Zach and Eric) that I haven't seen in a while were running, as were my sister-in-law (Lu), good friend (Corey).

We arrived in Utah on Tuesday.  Tuesday night Michael and I did a 4 mile training run with Corey.

Wednesday Malissa and I did a 3 mile training run on a path in Clearfield.

Thursday and Friday we did no running, just sight-seeing around Utah.  There's so much that has changed in the four years since we lived there, but a lot was still the same.  We hit restaurants we don't have in NC, visited my dad's grave in Layton, and just relaxed.
Friday it was finally time to head to Park City. We checked into our hotel, picked up our race packets, and set out to do some carb-loading.  We went to Maxwell's, where the runners had spaghetti, while Kyle and Alicia had pizza.

Then we met up with everyone else in our party.  Shalila and Lisa (my sisters) came down from Idaho, as did Zach and Lu.

We turned in pretty early Friday (10:00 PM) so I could get some rest before the early morning. I was worried I wouldn't be able to fall asleep with my mind racing about the run in the morning, but I fell right asleep.

At about 11:30 PM I awoke to someone knocking on our hotel door.  I couldn't believe someone was waking me up on such an important night of sleep.  I had told everyone that knew I was there good night and they knew not to wake me.  So I just ignored it and tried to go back to sleep.  A few seconds later, they knocked again.  So I got out of bed and looked through the peep hole.  It was a kid, I wondered who it could be and opened the door.  It was my 10-year old son Michael!  He had sleep walked and the door had shut behind him.  He's standing in the hotel hallway, in his underwear, in tears.

Well, let me just say, that freaked me out.  Imagine if he had not been able to remember what room we were in, or countless other things that crossed my mind.  I lost about 90 minutes of sleep thinking about that, then finally got back to sleep.

On race morning the alarm went off at 4:45 AM, to give us time to eat and digest.  We met everyone in the hotel's breakfast area and had a good chat.

We made our way to the race area where we met up with Shalila and Lisa, Corey and Tracey, and their kids.  Everyone helped out with the non-running Kids.

Michael, Corey, and I lined up at the very front of the start line.  When the race started, we went out faster than I had planned (don't I always?), but we felt really good.  We maintained an 8:30 pace for the first half (uphill) of the race.

At the turn-around point, knowing the rest of the race was downhill, we picked up the pace to right around 8 minutes flat.  Michael was doing awesome, I felt great, but I could tell he did not have as much gas in the tank as I did.  With about 3 miles to go, I asked him if he wanted to keep up with me, or run our own pace.  I emphasized that his accomplishment was amazing, and he didn't need to try to beat me.  I was trying to hit 1:45 to qualify for the 'A' corral at next year's Peachtree Road Race.  He has already qualified for that corral.  He said he wanted us to each run our own pace, so I sped up a little to around a 7:50 pace, while he slowed down for the last three miles to about an 8:45 pace.


The award ceremony was great.  There was some confusion regarding age divisions, so I did not know if Michael had placed until they called his name for 2nd place in the 18 & under division.  Look at the difference in height! 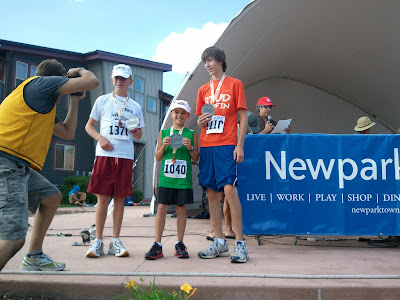 That tall kid took 3rd place, and I wonder what was going through his mind knowing that this 10 year old kid beat him.
My favorite part about the day is how everyone treated Michael.  He was a rock-star.  During the race, without exageration, I bet I heard over 100 people yell out to him in surprise something like "Wow, great job 1040!".  The guy in second place at the time, on his way back reached out and gave Michael a high-five.  Complete strangers came up to him after the race and wanted their picture taken with him.  I was one proud Daddy!

This race was amazing, I wish I could live it over again.  We have way too many pictures to put on here, there are a bunch more here.

This part written by Malissa

I didn't get as much sleep as Owen. I never really do the night before a race. I had a bunch running through my mind, so many unknowns. I knew it was going to be nice running in the cooler temperatures but was worried about the high altitude. I had only ran once since we arrived in Utah and that was down in the valley. I'm not a big fan of running on gravel so I worried about that too.

I'm always so thankful for that burst of adrenaline that I get the morning of the race. It helps me forget about the sleepless night before.

I started out running with my sister-in-law, Lilianna. We ran the first mile together. I could tell the altitude was effecting me a little and that I wasn't going to be able to keep the pace we were doing. I didn't want to hold her back so I slowed down a bit and she sped up.

I have grown accustomed to running in high humidity and drinking a lot of water while I run. There were two things that I noticed that were very different this race because of the low humidity and cool weather.

1. I had to hit every porta potty! That's right, every single one!! We calculated that I wasted 5 minutes in the bathroom.
2. I wasn't all sweaty during and after the race. In fact both Owen and I were trying to figure out why we had sand on our face. Someone had to point out to us that it was salt from our dried sweat.

It was such a beautiful course. Here are some pictures I took while I ran. 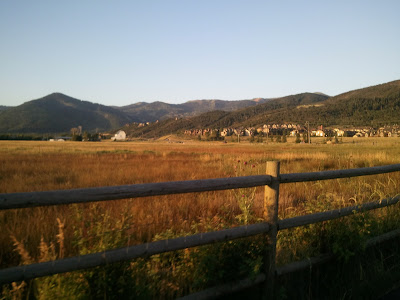 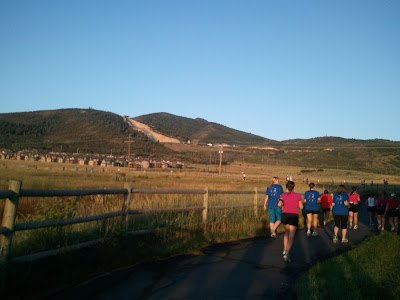 I felt great and ran about the same pace as my practice 10 miles back in Charlotte. Even though it took me 3 hours to finish I never thought "when is this race going to be over?". I just soaked up the beautiful Utah scenery and enjoyed every minute of it.

Posted by Lillywhite Family at 7:00 PM No comments: