I just happened to go to Park City Marathon's website and was pleasantly surprised to see a picture of Michael and me on their home page.  Too cool! 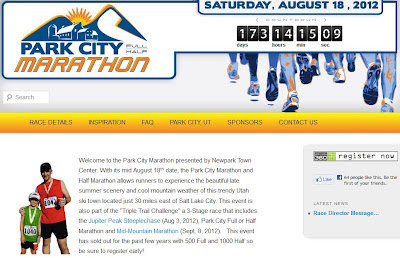 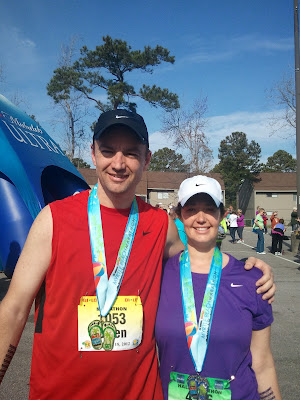 Friday morning our long awaited trip to Myrtle Beach was finally here.  We put the kids on the bus to school then packed up the car and we were headed to the beach!  The kids were going to spend a fun weekend with their Opa and Neina after school.

We arrived in Myrtle Beach and checked into the hotel.  Our first thing to do was the Expo. 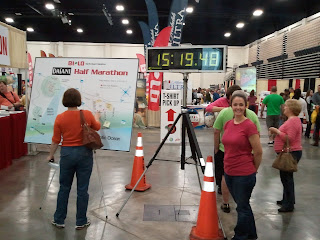 The expo was fun, we didn't stay long but walked up and down each aisle.  I took notes on how I thought I should prepare my booth when I get one for Taz Running.

After the expo, we decided to go to the beach.  I hate dealing with parking, so we left the car parked at the expo and walked to the beach, not far at all. 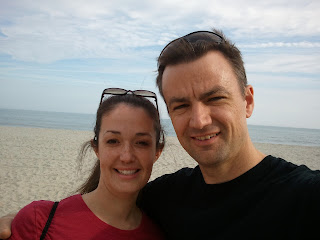 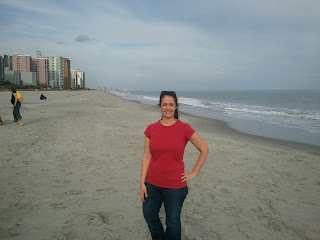 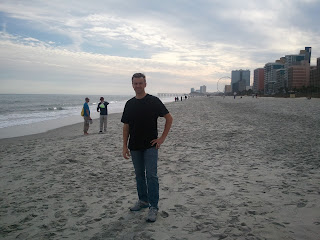 Malissa wanted to walk barefoot so her toes could be in the sand, but I wouldn't let her.  I was afraid we'd step on something and get a small cut the day before the marathon.  So we were the dorks walking with running shoes on the beach.

We hung out back at the hotel for a while until our 7pm reservations at Capriz Italian Feast.  That place was awesome (forgive me for the lack of pictures, totally forgot.)  There is absolutely no menu.  There's a buffet bar that you "warm up" with. Then, when you're ready for the main course(s), you flip this little card over from the red side to the green side.  There are chefs that walk through the dining rooms looking for tables with a green card and they ask you if you want some of what they have.  So you can just keep eating, trying things you would have never ordered but that were absolutely delicious.  I definitely recommend it.

We headed back to the hotel, got our stuff ready for the 4am alarm clock and went to bed.  I woke up at about 3:15am and couldn't fall back to sleep so I was relieved when the alarm finally went off.  We got up, ate a bagel, drank some orange juice, and got ready.  Our hotel was a block from the start/finish line, which is awesome.  We strolled out of our room about 20 minutes before the gun went off.

When we got to the start line, they wanted the half-marathoners on one side of the street, and the marathoners on the other.  The pace flags were quite different since there were so many more half runners than full.  Because of that Malissa needed to go quite a ways further down the street than me, so we said our goodbye's right when we got there and went our separate ways (Malissa ran the half, I ran the full.)

I had a goal to beat 3:20.  This was only my 2nd marathon, and I took the 1st relatively easy finishing at 3:40:24.  So my goal seemed aggressive, but I thought I could do it.  That works out to a 7:38 pace, so each mile I compared the clock with my handy-dandy pace tattoo from Taz Running (shameless plug.)  The first 12 miles I was consistently (and fairly comfortably) beating that pace.  See my split times here.  After mile 12 I was more than a minute ahead of pace. Then on mile 13, I decided I could wait no longer and had to use the bathroom.  I waited until after the half-marathoners split off so I wouldn't have to wait in line. It ended up only costing about 30 seconds or so, but I sure hated losing that time.  Little did I know my wife had a far worse problem with this (her story below.)


I slowly but surely built my lead against goal pace back up to a full minute by mile 22.  Even after mile 24 I was still ahead of pace by a few seconds, but I knew the gas was running out.  My last two miles were much slower than that. I had nothing left, but I am very happy with my time and the experience.  I very much enjoyed the first 23 miles.  The last three were not as enjoyable, but not painful either.  I ended up with 3:21:58, beating my PR by more than 18 minutes. Partly because I took my first a little easy so I could enjoy it, partly because Myrtle Beach is much more flat than Charlotte, and partly because I've improved as a runner.  I missed qualifying for Boston by 12 minutes, but that was never an option, I knew I couldn't go that fast.  That day will come.

After the finish, we grabbed some goodies and then walked back to the hotel.  I felt surprisingly good.  My walk was slow, but not painful.  I could stand much better than I could after my first.  After resting for a couple of hours I felt great.  Then my left foot started hurting.

We had a 3:00pm appointment for a couples massage, which was awesome.  I had never received a professional massage before.  It was amazing, I had no idea what I was missing.

We went to dinner at Sea Captain's House.  It was terrific, the clam chowder was my favorite, but everything was great.

Sunday morning we awoke fairly early, packed up and headed home.  We missed the kids and couldn't wait to see them.

My left foot hurts worse than ever and I'm pretty worried about it.  I have a lot of races lined up, including the Georgia Marathon on 3/18 (less than a month away), so I need this thing to heal FAST.

Here's some video of my marathon:

I was a little nervous going into this race. I had trained really hard on hills, getting ready for Big Sur, and was experiencing some pain behind my left knee. I mostly felt the pain when going downhill and was hoping that if I took a couple extra days off and really stretched it out I would be good to go on Saturday, especially since Myrtle was a flat course. On Friday I went out for my easy two mile run and came back a little worried. My legs felts like they were in cement blocks and toward the end of the two miles my knee was hurting a little. I began to worry that maybe I took a little too much time off.

On Saturday morning I woke up feeling rested but had a little bit of an upset stomach. Thankfully, it settled right before we left the hotel room to head down to the race.

I had a goal to hit 2:25. Once the race started I felt great. My first four miles I was right on track to hit my goal with a pace of  11:06, 10:59, 11:00, 10:57. I have the world's smallest bladder. I had to use the bathroom six times my first half marathon. I was hoping to make it halfway before needing to stop this time but I decided at mile four I better go ahead and stop. That's when everything went a little downhill for me. I was a little surprised to see they only had three stalls and there was a line. As I was standing in line so many things were going through my head. The thought crossed my mind to keep running on and just hit the next one but I'm so thankful I didn't do that because there was only one stall and an even longer line. I was standing right next to the clock and it was torture watching the minutes change. I started getting sick to my stomach when I looked at the clock and then looked at my pace tattoo and realized I was supposed to be at mile five by then. Finally after eleven minutes I was back to running and knew I had some major making up to do. Mile five my pace was 18:29. Miles 6-10 I felt pretty good. I would have a great mile and then an ok mile and then a great mile and an ok mile still hoping to make up some of the time I lost at the bathroom (10:56, 11:23, 10:50, 11:26, 11:13). Then mile eleven and twelve hit me like a ton of bricks...I was struggling to stay focused (11:59 and 11:53). At the end of mile twelve I heard a lady say, "it's mind over matter now".  After hearing her say that I reminded myself that this is what I had been training for and I didn't want to see it slip away so I dug deep, real deep and began running faster. I finished mile thirteen strong at 10:49 and crossed the finish line at 2:35:11.

Even though I didn't make my goal of 2:25, I'm very happy with the improvement that I made these past six months. I think I've come a long way from my 3:03:38 finish at Park City.
Posted by Lillywhite Family at 9:09 PM 2 comments: