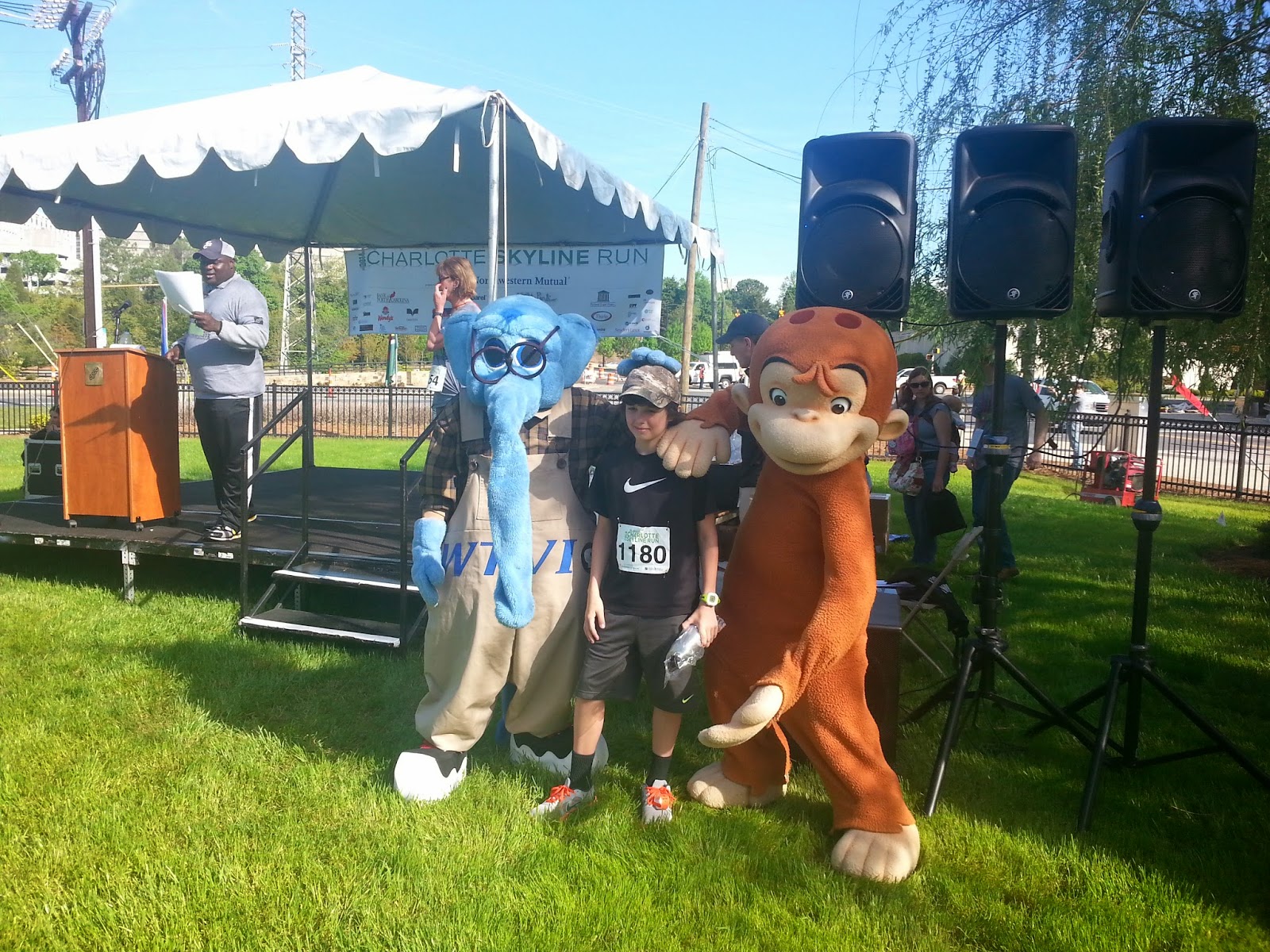 The CPCC (Charlotte Piedmont Community College) Skyline 5k is the third race in Run For Your Life's Grand Prix Series.  Going into the race, Michael had a goal to beat his 5k PR (19:43), and if feeling great, he wanted to beat mine (19:18).  I know it's only a matter of time until he beats me, he is improving so fast.

The weather was beautiful for this race, it started at 8 AM so we didn't have to get up quite as early as normal.  We were going camping with Zach and Lu immediately after the race, so planning was a little more complicated, however.


I told Michael to start at the front.  I wouldn't normally do that, but the GPX series points are awarded based on gun time, not chip time, for some reason.  I've emailed them asking them why, and telling them that they should use net time, so as not to encourage slower runners to start at the front.  I got no response.  Michael held his own at the start (see video below).

As we were waiting for Michael to finish, just ahead of him we saw two boys who looked to be in Michael's division.  Sure enough, they were 12 year old twins that finished just a few seconds ahead of Michael.  So Michael finished 3rd in his division of 11-13 year olds, with a sub 20 minute 5k.  Incredible!

Michael later told us that he was battling with them the entire race.  They passed him at some point.  At the water station they got water and Michael thought he could use that to pass them, but was disappointed when they just sipped the cup and didn't lose any time.   He's so competitive, I hope they show up at the next race so he can race them again.  It's amazing how much good competition helps you improve.

Michael ended up not beating his PR, missing it by 12 seconds.  He was disappointed about that, but I told him when you factor in the elevation profile of this course, that his time was actually more impressive than his PR time on a flatter course.

Michael now has a commanding lead in the GPX Series points after 3 of 7 races, which is especially impressive when you consider that his age group in the series is 19 & Under.

Posted by Lillywhite Family at 10:52 AM No comments: 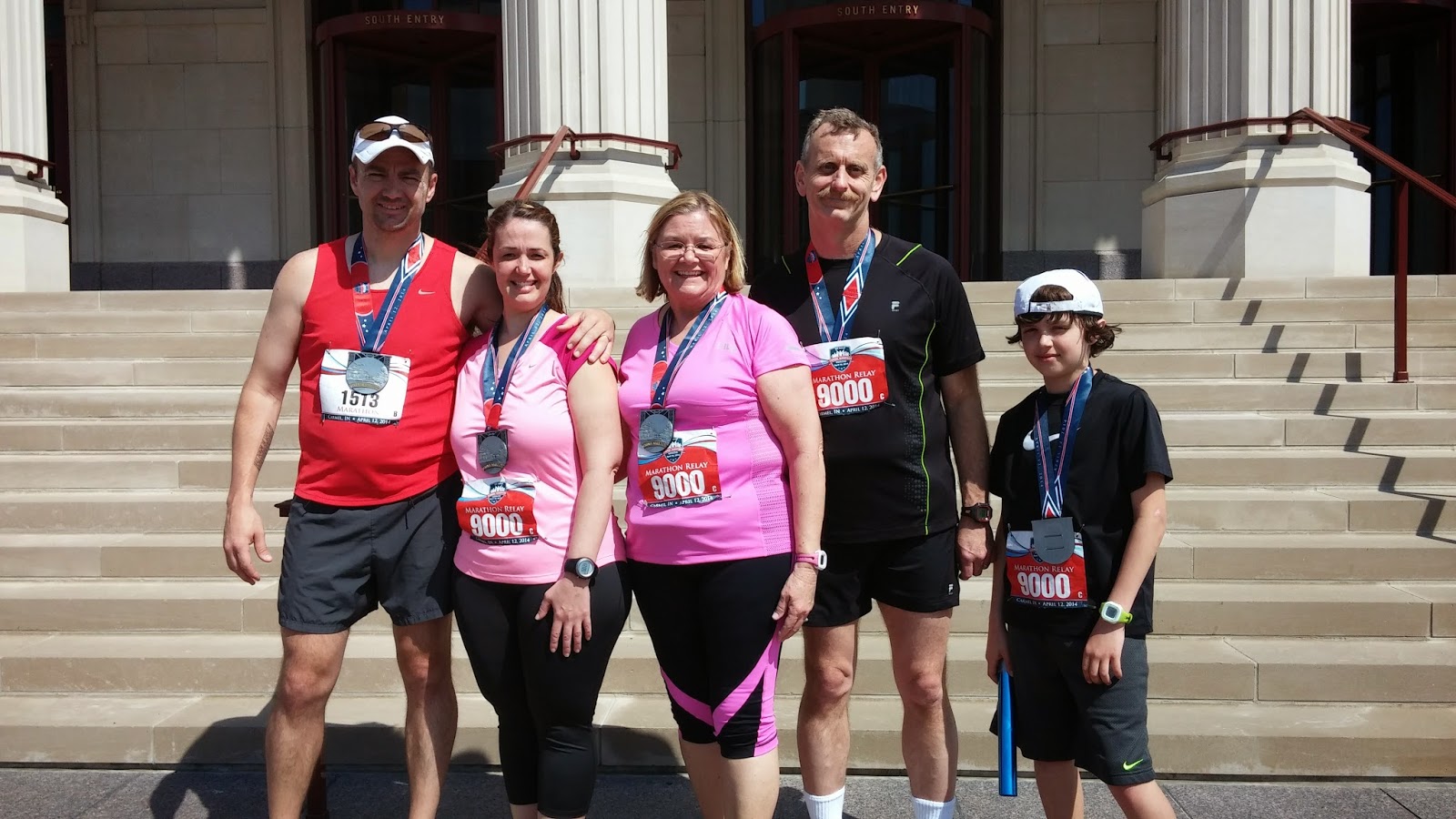 I love race trips where family meets us there.  This race was about an hour and a half away from where my grandma, Ro Ro, lives.  My mom and step-dad met us there and ran the relay with Malissa and Michael while I ran the marathon.

It's about a 9.5 hour drive from our house, so we broke up the drive there into two days.  On Thursday, we drove five hours to London, Kentucky.  We had stayed there on a previous trip on our way to the Chicago Marathon.  Thursday was also Michael's track meet, so we didn't leave Charlotte until around 7PM, which meant we arrived in London shortly after midnight.

We got checked into the hotel and were asleep within 15 minutes.  Friday morning I got up before everyone else, around 7AM.  I sneaked (sounds wrong) out of the hotel room and ran my 2 mile shakeout run along the streets of London, KY. I went upstairs and woke everyone up, we had breakfast in the hotel, and we were back on the road towards Carmel.

We arrived in Carmel in the early afternoon, got checked into our hotel, met up with my mom and Torre, and headed to the expo/packet pickup.  Because we were doing the relay in addition to me doing the marathon, everyone was pretty worried about the logistics of it all.  The race director had told me, in a response to my question via email, that Kyle and Alicia would not be allowed on the relay shuttles.  Because we had no one there to watch them while we ran, we had to get creative.  We decided Malissa would drive, with the kids, to exchange point #2.  She would hand the keys to Alicia and wait for Torre to arrive.  Meanwhile, Michael would start with me and Torre would hand Michael his cell phone at the first exchange.  Michael would then hop on a shuttle and wait for everyone at the start.  To ease our minds, we scoped out the parking at the second exchange point, and the start/finish on Friday night.

We then had Fazoli's for dinner.  It is a fast food Italian Restaurant.  When we lived in Layton, UT, we used to eat there all the time, but they don't have them in Charlotte.  I really enjoyed it.

The race started and I couldn't believe I was running a marathon, and that Michael got to run the first seven miles with me.  My goal time was 3:30, which works out to about 8 minutes per mile.  That is much slower than Michael usually runs in races, so he was just taking it easy so we could run together.  Twice his shoe came untied, he told me to keep going and he would catch up.  Each time I expected to be without him for a half-mile while he slowly caught up to me, but each time he absolutely sprinted to catch up to me and was only gone for a few seconds.  Another runner jokingly said "He's doing that on purpose just to show off his speed".

Sadly, mile 7 appeared way too soon, and Michael handed the baton to Torre.  The rest of the race I was by myself.  It was a beautiful course, and the weather was beautiful.  I stuck to my pace strategy up until mile 20, when it started to get hard.  I didn't crash, but definitely slowed down to around 8:30 per mile.

I crossed the finish in just over 3:32, totally happy with my time.  It got very hot at the end.  Torre and the kids were all waiting for me and snapped the following pictures.

Malissa then made her way to the finish and we waited for my mom to finish the race.  Malissa actually caught a ride with a volunteer after completing the third leg and handing the baton to my mom.  The shuttle organization was a disaster, but luckily that volunteer saved the day.


After the race, we all headed back to the hotel and showered. We drove to our motel in Linton, Indiana, stopping for a terrific meal at Applebee's.


Saturday and Sunday we enjoyed being shown all the Landmarks from my mom's childhood.


Monday we got up and drove straight home, 9.5 hours.  What an amazing trip it was!

Posted by Lillywhite Family at 8:30 AM No comments: