This was the last race in Run For Your Life's Grand Prix Series.  It was a series of 9 races where you earn points based on your performance at each race.  Michael wanted to enter this competition even though he was up against 19 year-olds (the division he's in is 19 & under.)


Malissa's dad (Opa) was able to make it to this race.  We were all very excited to spend the time with him, and that he got to see Michael race.

We had never run a 15k competitively before, so coming up with a pace was difficult.  We often refer to McMillan Running's Calculator.  It is really accurate at taking your performance at one distance and calculating what you should expect at a different distance.  Based on Michael's performance last month at the Bluegrass Half-Marathon, we came up with a pace of 7:11, for a goal finishing time of 1:06:56.

Michael went out too fast the first six miles or so, so he paid for it at the end, but still finished within nine seconds of his goal.  I, once again, am VERY proud of him.

Because of the longer distance of this race, they lumped all the kids in the 17 & Under division (for this race).  Michael took 5th.

For the series, Michael ended up barely missing out on 3rd place, but we're all super proud of him for taking 4th as an 11 year-old.

And here's his Garmin data (he wore my watch):

Email ThisBlogThis!Share to TwitterShare to FacebookShare to Pinterest
Labels: Race 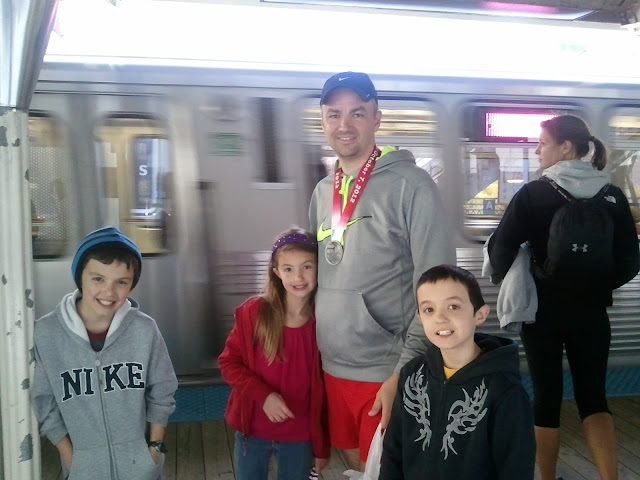 The Chicago Marathon.  Just saying those words bring so many emotions.  It's second only to Boston on my list of prestigious marathons. Leading up to this race I was so excited, but also worried.  Not about the running, just the logistics of getting there.  I want my family to be there for as many of my marathons as possible, but I just can't afford 5 round trip airfare tickets for each of these races.  So we decided to drive.

It's about 800 miles from our house to Chicago.  Our Explorer is a V8 and gets terrible gas mileage.  So I did the math and figured it would save a bunch of money (and wear and tear on our car) to rent a car.  We rented a little Toyota Corolla that averaged about 35 mpg and we were off!

We decided to break up the trip into three segments on the way there, Thursday night we were headed for London, Kentucky.  Picked in part because it's a little over halfway to Ro Ro's house (Great Grandma), and in part because it was cool that we were going to London. Charlotte, NC to London, KY was about 5 1/2 hours.

Friday we got up, had a good Holiday Inn Express breakfast, and were on the road by 9 am.  It felt good to do our driving early in the day after a good night's sleep.  The kids were excited that they were missing school. London, KY to Bloomfield, IN was about 4 1/2 hours.

Friday night we all went to Golden Corral in Bloomington, Indiana.  On the way we picked up my nephew (Eric's son), Alex.  It was a real treat to be able to spend time with my mom, Torre, Alex, and Ro Ro.  We had a great dinner.


Saturday morning Michael and I woke up and went for my day before the marathon run. I always run an easy two miles at about the time the marathon will start the next day.  We didn't dress appropriately for the cold Indiana air.  All we could concentrate on was how freezing cold we were.  It was in the lower 30's, which we weren't yet accustomed to.

We had breakfast, and then packed up the car for the last leg of the trip to Chicago.  Bloomfield, IN to Chicago, IL was about 4 1/2 hours.

When we arrived in Chicago, we decided to go straight for lunch at Giordano's.  I had eaten there on my last business trip to Chicago in 2011.  It was wonderful and I wanted the kids to experience true Chicago deep dish pizza.

We drove around for 20 minutes or so looking for parking and couldn't find any.  So we decided we'd have to pay the ridiculous parking garage prices.  Ridiculous is an understatement: $35!


After the wonderful lunch, we caught the free shuttle that took us to the expo.


Saturday after the expo, we made our way to the hotel, which was right by the Midway airport (about 15 miles from downtown.)  I still hadn't nailed down how we were going to get to the race in the morning.  So I spent a good part of the night researching that on the internet. We decided we'd drive about a mile to the train station right next to the Midway Airport.  Then the train would take us right by the race start.  That worked perfectly.

It was very cold before (and during) the race.  I had bought a sweater at a Goodwill store that I could discard before the race.  Malissa and Alicia made fun of me for buying a "Mr. Rogers" sweater, but it was warm.

The race started and I was feeling great.  My plan was to run about a 8:10 pace per mile the first half and then try to run negative splits, speeding up to about 7:50.  That worked good until about mile 20.  I didn't really "hit the wall" but just couldn't run that fast any more. I slowed down to about 8:30 the rest of the way. I think negative splits are a myth :) I've tried every marathon and I don't think I can do it.  So I think I'm just going to be OK with slowing down at the end from now on.

The course was awesome.  The crowd support was unreal.  26.2 miles of screaming fans helped so much, I've never experienced anything like it.  I saw my family cheering for me at the start, but the crowd was so loud, I never could find them, even though I knew where they'd be at miles 13 and 26 (see video below).


I finished in 3:37:42, which is my second fastest time among eight marathons.  So even though I didn't hit my 3:30 goal, or my goal of negative splits, I am very happy with it.  The post-race support was tremendous.  They handled 37k+ finishers with no lines for medals, space blankets, tape for the space blankets, food, water, ice, etc.  It truly is a world class event.

Sunday after the race we stopped for some Chicago-Dogs, some White Castle burgers, and then headed back to Ro Ro's house.  Then Monday was the dreaded 10 hour drive back to Charlotte.  The kids were awesome, 29 hours of driving in four days, with only a few "flare-ups".

Here's a video compilation of videos shot by Malissa on the course:

And here's my Garmin data from the race (the tall buildings caused it to lose GPS several times, and I don't know what is up with the elevation gain numbers, the course was totally flat):

Posted by Lillywhite Family at 10:24 AM 2 comments: